Young woman who lost memory due to brain injury from accident miraculously healed. She and her family accept Jesus. 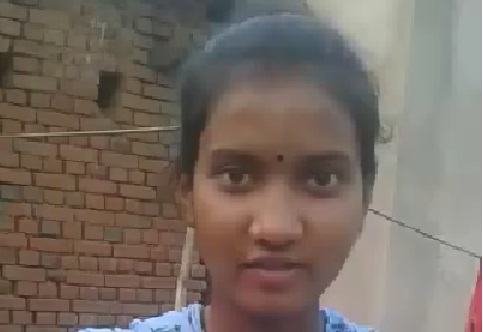 “Greetings to you in Jesus’ precious name! Thank you so much for your intercessory and financial support. We rejoice to receive powerful reports from our harvest field. Praise the Lord for His abundant grace on our ministry.”
.

“Young Rasmi (above & below) had been involved in an accident. Due to an injury to her head, she had lost her memory and was mentally unstable. Her father and mother had her treated in a hospital with medication, but she did not recover. Then as our Elijah Challenge workers ministered to her, the Lord restored her brain and her mind. After the gospel was shared with them, Rasmi accepted Jesus Christ along with her family members.”
.

“For the past year, Bhaskar had been blind in one eye. A doctor whom he had consulted had given him medicine and eyedrops, but after a few months there was no change. He saw another doctor who also prescribed medicine for him, but to no avail. Then our Elijah Challenge workers ministered to him in the name of the Messiah Jesus, and his eyesight was miraculously restored. He could see again with that eye. After the gospel was shared with him, Bhaskar believed and accepted Jesus as his only Lord and Savior.”
.

“A woman named Dropati Majhi had high blood pressure. To add to that she had had a fever for a long time. Finally she became so weak that for a few days she could not even walk. A doctor gave her medicine, but despite it she was not well. For a few days she could not even feed herself. Then our Elijah Challenge workers ministered to her in the name of Jesus, and her blood pressure returned to normal and the fever disappeared. Dropati believed and accepted Jesus Christ.”
.

“Babita, a young woman, had a migraine headache and an infection in her stomach. For months she had been taking prescription medication prescribed by her doctor, but there was no change in her condition. She then contacted our Elijah Challenge workers. They came and ministered to her in Jesus’ wondrous name, and Babita was miraculously healed. She believed and put her faith in Jesus Christ.”
.

“A woman named Kiran Rohidas was suffering from much pain due to arthritis. A doctor’s treatment proved to be ineffective. She was reduced to having her husband just massage her body in hopes of relieving her of some of the pain. Then Kiran came to one of our house churches where our workers ministered to her in the name of Messiah Jesus. Miraculously, she was totally healed. Along with her husband, Kiran believed in the Lord and accepted Jesus Christ.”
.