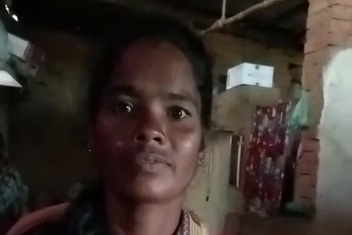 “Praise the Lord for your intercessory and financial support for the fruitful extension of His ministry here in India. I hope to send you more and more reports and photos of baptisms each month after having encouraged our workers to teach our new believers about baptism. I have been to a few districts like Jharsuguda, Sundergarh and Sambalpur. In Sundergarh we had one-day teaching seminar with our new believers from four to five house churches. I will send photos to you.”
.

“A woman named Kamala Munda (above & below) suffered from both paralysis as well as a mental disorder for six months. Her husband had already consulted with a doctor who treated her with medication for a long time. But Kamala’s condition was unchanged. She was at home one day when her husband met with our Elijah Challenge workers and shared with them about her serious condition. They then went to their home and ministered to Kamala with authority and power in the name of the Messiah Jesus. She was miraculously healed from both the paralysis and the mental disorder. Both her husband and Kamala believed and accepted Jesus as their only Lord and Savior.”
.

“Abani was very ill with jaundice. The ayurvedic medicine she received from a village doctor did not help, so she consulted with a doctor in the hospital. He also prescribed medication for her, but it produced no relief for Abani. Then our Elijah Challenge workers came and ministered to her in the wondrous name of Jesus, and Abani was miraculously healed from the jaundice. After that she accepted Jesus Christ.”
.

“Amrita Kujur, a very young mother, had pain in her left leg. During the day she could sleep, but at night the pain in her leg would become severe. Both Amrita and her husband could not understand why. After they came to understand that the pain was demonic in nature, they contacted our Elijah Challenge workers. After they ministered to Amrita with authority in the marvelous name of our Lord Jesus, she was wonderfully delivered from the pain. Both she and her husband then believed in the Lord and accepted Jesus Christ.”
.

“For a long time, Rasmi suffered from bad gastritis despite taking prescription medication on a daily basis. Most of the time she would feel uncomfortable. Then our Elijah Challenge workers came and ministered to her Jesus’ wonderful name, and Rasmi’s stomach was miraculously healed. She then believed in the Lord and accepted Jesus.”
.

“A young man named Bisu Oram had diarrhea for five days continuously. Medicine did not stop the diarrhea, and finally his condition became critical. Then our Elijah Challenge workers came and ministered to him in Jesus’ name. The diarrhea ceased, and Bisu was miraculously healed and restored. His parents then believed in Jesus, accepting Him as their only Lord and Savior.”
.