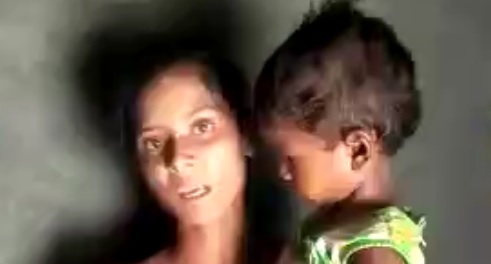 “Thank you so much for your intercessory and financial support for the ministry here in India. The Lord is so gracious to bless our harvest workers in producing fruit for the Kingdom of God.”
.

“Binita Majhi (above & below) suffered from severe pain in her stomach and chest, and could not comprehend what was happening to her. After a night of torment, she and her husband went to see a doctor the very next day. A scan revealed that Binita had a stone in her stomach. The doctor advised an operation to remove the stone, but since they could not afford it they were at a loss as to what to do. In the meantime they came across our Elijah Challenge workers. For three days they ministered to Binita in the marvelous name of our Messiah Jesus. The stone in her stomach then miraculously vanished. Both she and her husband then accepted Jesus Christ.”
.

“For a long time a woman named Mangri suffered from pain in her stomach. A doctor of allopathic medicine prescribed a drug for her, but after taking it for two months Mangri was still not well. So she went to a doctor specializing in ayurvedic medicine, but the medicine he prescribed for her and which she took for a month was also unable relieve her of the pain in her stomach. Finally she heard that she could be healed through prayer, and so looked for a pastor. She came across our Elijah Challenge workers, and asked for their help. They ministered to her with the supernatural authority and power of the wondrous name of our Messiah Jesus, and Mangri was totally healed from the pain which had tormented her. Along with her husband Mangri then accepted Jesus as her only Lord and Savior.”
.

“A young woman named Sibani Kerketta had a severe case of COVID-19. Prescription medicine could not reduce the fever and pain which racked her body. Her cough got worse and worse to the point which she had no more control over it. Her parents were frightened and deeply concerned for her. Then her father contacted our Elijah Challenge workers who came and ministered to her in the name of our Lord Jesus. Sibani was then miraculously and wondrously healed. Her family then believed and accepted Jesus Christ.”
.

“For five months Lata Kisan had a bad migraine headache. Prescription medication from a physician provided no relief for her. Her husband then took her to see several other doctors each of whom prescribed drugs for her. But the horrible pain from the migraine would not relent. Then after our Elijah Challenge workers came and ministered to Lata with authority and power in Jesus’ name, the migraine disappeared. After that both Lata and her husband accepted Jesus Christ.”
.

“While on a bus, a government worker named Akhaya lost his service book which contains indispensable documentation regarding his lifetime service for the government. Despite looking everywhere he couldn’t find it. After that he put an ad in a local newspaper hoping that someone had picked it up, but no one answered the ad. Finally Akhaya become despondent over the loss of his service book which was so critical to his career. Meanwhile he came across our Elijah Challenge workers, and shared with them about his lost service book. He told them that he had tried everything, even asking the temple priest to help him, but his service book did not turn up. He asked our workers to pray to their God for him to find his service book. They then prayed in the name of Jesus Christ for the service book to be returned. Within two days he received it back. Akhaya was amazed and decided to put his faith in Jesus Christ, despite all his family members being Hindus. Now he is receiving much guidance from our workers.”
.