Hindu man miraculously healed from stroke and able to walk again, he and wife accept Christ 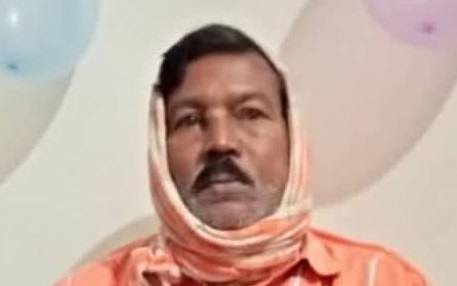 “Greetings to you in Jesus’ precious name. Thank you so much for your intercessory and financial support. To the glory of God, I would like to inform you that in the last two years we have been the number one purchaser of Bibles in Western Orissa. Praise the Lord for His provision!”
.

Selected reports among many received…

“For a year Gadadhar Kumar (above & below) was not able to walk after suffering a stroke affecting one side of his body. Regular prescription medication did not result in any change in his condition. After our Elijah Challenge workers ministered to him in Jesus’ name, he was wondrously healed and able to walk again. Gadadhar and his wife both accepted Jesus.”
. “For two years a young woman named Kaibati Harijan (below) suffered from abnormal menstrual periods which were totally out of order. Her parents had taken her to several doctors, but despite the medications they prescribed her suffering actually increased. When our Elijah Challenge workers came and ministered to her in the wondrous name of our Lord Jesus, the young lady’s period was restored to normal. Then our workers shared with the gospel with them. Both her parents and Kaibati accepted Jesus as their only Lord and Savior.”
. “Balabi Tandi (below) had not been able to hold her head up straight due to a problem with her neck. A doctor had been unable to diagnose the nature of the problem. At times she had the same problem with one of her legs which would refuse to straighten out. Long-term prescription medication did not help her. Finally, our Elijah Challenge workers came by and ministered to her in the name of Jesus of Nazareth. After that Balabi was able to straighten out her neck and her leg. She then accepted the Lord Jesus.”
. “For seven very long years a man named Mahadev (below) suffered from a mental disorder. After treatments by various doctors in different hospitals — including a brain operation — costing his family hundreds of thousands of rupees, Mahadev did not recover. Then somehow they heard about the ministry of The Elijah Challenge. The family consulted with our workers and asked them to minister to Mahadev. His mind was then miraculously restored in the name of Jesus. Then after the gospel was shared with the family, they accepted Jesus Christ as Lord and Savior.”
. “Over a period of four years, demons would attack a woman named Pinky (below) from time to time. Many sorcerers had attempted to help her, but could do nothing to ward off the attacks. Her poor parents were exhausted taking her from place to place for deliverance from the demons. So it was wonderful for them to see their daughter miraculously set free from the attacks after our workers ministered to her in Jesus’ wonderful name. The demons simply left her without creating a fuss. Along with her grateful family, Pinky accepted Jesus Christ.”
.