Hideous demons appeared to three-year-old boy every night terrifying him, BUT God… 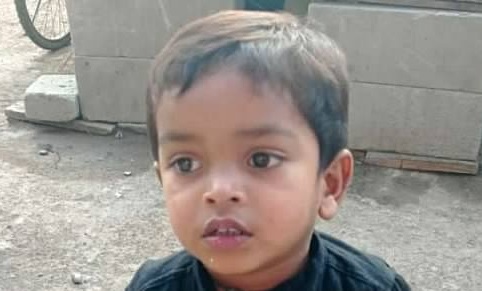 “Greetings to you in Jesus’ precious name. Thank you so much for your intercessory and financial support. Praise the Lord, we receiving such powerful reports from our harvest workers—even during a severe lockdown due to the pandemic.”
.

“For a long time Sadashiv (above & below), a three-year-old toddler, would cry every night. The little boy wasn’t able to express to his parents what was happening to him. But every night demons would appear to him and frighten the daylights out of the little boy. His parents took him to the priest in the Hindu temple who performed mantras for him. But night after night little Sadashiv continued to be terrified by the demons. Then our Elijah Challenge workers came and ministered to him, rebuking the demons and commanding them not to return in Jesus’ name. From that night onward, his crying stopped and Sadashiv was able to sleep peacefully. His grateful family believed in the Lord and accepted Jesus Christ as Lord and Savior.”
. “Young Madhu Yadev (below) was vomiting blood for a long time, and had become physically very weak. He had consulted with the doctor at the city hospital, but even after taking the prescribed drugs he did not recover. He then took ayurvedic medicine, but there was no change. Then he met with our Elijah Challenge workers and requested ministry from them in the name of Jesus Christ. Madhu’s vomiting promptly stopped. After his miraculous recovery he believed in the Lord and accepted Jesus Christ as Lord and Savior.”
. “Rakhi (below)had a diseased uterus, and despite taking medicine regularly from her doctor the disease persisted. Then her doctor advised her to undergo an operation for the removal of her uterus. But since the surgery would be prohibitively expensive for them, the family decided to forgo it. They then contacted one of our Elijah Challenge workers requesting help. Our workers went and ministered to her in Jesus’ name. Rakhi was miraculously healed, and no surgery was needed. She believed and her entire family accepted Jesus Christ.”
. “A young man named Vijay (below) suffered from a severe back injury. He could neither stand nor walk. The doctor he consulted prescribed for him medicine which he took for two months. But afterwards Vijay still couldn’t walk. Then our Elijah Challenge workers ministered to him for two days, and Vijay’s back was miraculously healed. He accepted Jesus Christ.”
. “Sahadev Naik (below) had a wound in his leg which did not dry out after long-term medication. Finally the doctor had to operate on his leg. The situation had become serious causing his parents extreme concern. Somehow they heard about our Elijah Challenge workers and called them to come minister to Sahadev in Jesus’ name. The wound was miraculously healed, and Sabadev accepted Jesus Christ.”
.