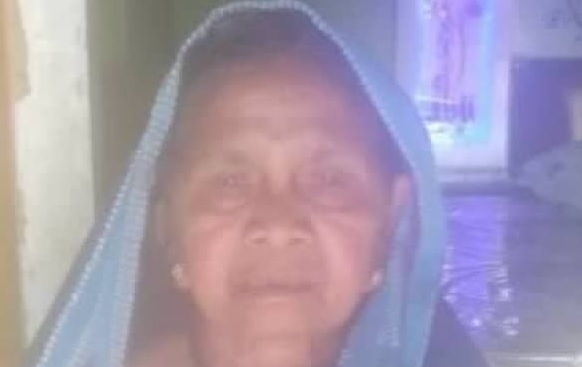 “Greetings to you in Jesus’ precious name. Thank you so much for your intercessory and financial support. Due to COVID-19 guidelines we have downsized our regular workers’ meeting, and instead have visited our harvest fields. We were glad to hear that our workers have decided to reach out to more and more new unreached regions and also to prioritize baptism for the new believers.

Please pray for them as they are fighting the Lord’s battles in enemy territory.”
.

“For two horrible weeks, a demon had tormented an elderly woman named Pathani Sabar (above & below). Sorcerers and a temple priest tried to help but failed. Then our Elijah Challenge workers were summoned. While they were on their way still at a distance from their house, she screamed with a loud voice saying she did not want to be disturbed. After that she got up and ran out of the house heading for the jungle, but her adult children caught up with her. After our workers arrived, they commanded the demon to leave her in the name of Jesus Christ. At that moment, Pathani was set free. Along with her children, she accepted Jesus Christ.”
.

“A woman named Indu (below) had serious hemorrhoids for the past few months. The bleeding had caused swelling in that part of her body. Despite taking medicine for a long time, the pain from the hemorrhoids was unbearable for months. Then over two evenings our Elijah Challenge workers ministered to Indu in the name of Jesus Christ. She was totally healed and free from the hemorrhoids. Along with her husband, a grateful Indu accepted Jesus Christ as the gospel was shared with them. She had been scheduled to be baptized in water last week, but for some reason it has been postponed.”
. “Young Rajani (below) had suffered from an abnormal menstrual period for four months. As the menstrual flow of blood would not stop, she became very weak. Prescription medication did not help her. Then our Elijah Challenge workers came and ministered to her in Jesus’ name. Her menstrual flow stopped, and Rajani was healed. She gladly accepted Jesus Christ as her only Lord and Savior.”
.

“Shyam (below) had an infection in his stomach for six months, leaving him with a severely swollen stomach. He could not eat anymore, and felt uneasy most of the time. After consulting with a doctor and taking medication, his uneasiness increased. Then our Elijah Challenge workers ministered to him in Jesus’ name. His stomach was miraculously restored. After our workers shared the gospel with him, Shyam accepted Jesus.”
.

“For three days, baby Divya (below) had stopped drinking her mother’s milk. She would also cry through the night. Her mother took her to a doctor, but he wasn’t able to prescribe anything for her. Then her mother began to think that Divya’s problem was the work of a demonm and so Divya’s father called a sorcerer who came and spoke a few mantras over her. But there was no change in the infant. Then our Elijah Challenge workers ministered to her in Jesus’ name, and she began to nurse again and drink her mother’s milk. Her nighttime crying also ceased. Divya’s parents accepted Jesus Christ as Lord and Savior.”
.