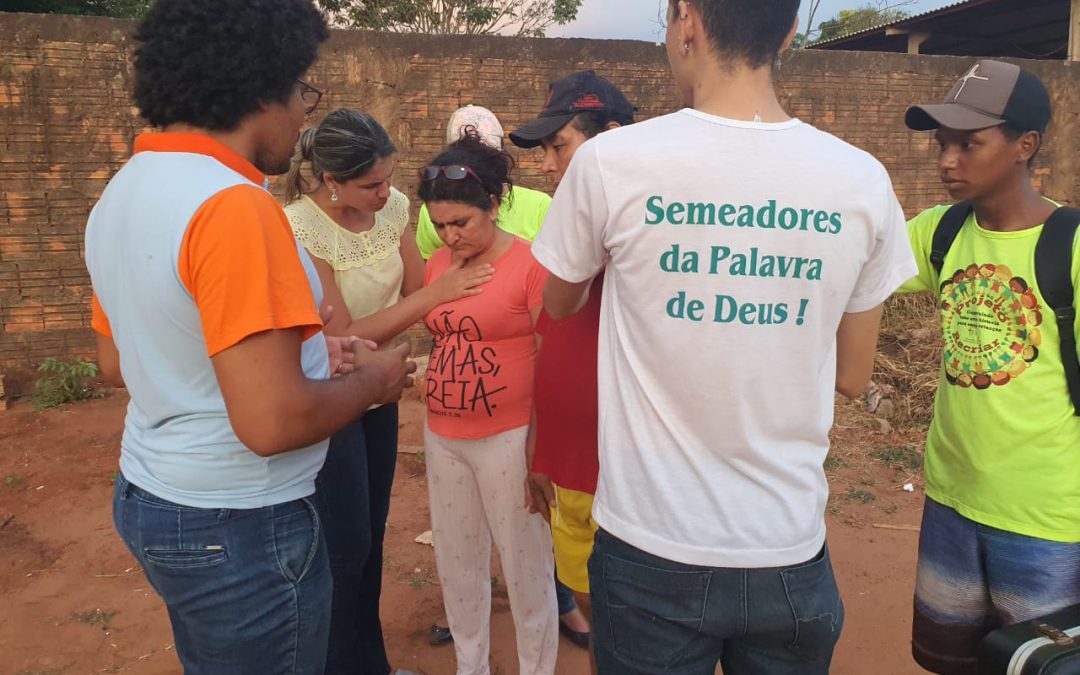 .
“The 13th to 16th of March was marked by a great move of God in Campo Grande, Mato Grosso do Sul State in Brazil.

The evangelistic training of the Elijah Challenge was conducted for the first time in the city, being held at the Christian Community Restore and Serve, under the leadership of Pastor Maria Izabel and at the Baptist Church of Peace, directed by Pastor Marcos. These were four intense days of ministry in which we could see the fulfillment of Mark 16.

During the training sessions countless people were touched by the Lord, getting, besides healings and deliverances, a fresh understanding of the Scriptures coming from heaven. It was a tremendous time!
. On Sunday afternoon, after having completed the training, we went out for practical evangelism from door to door. Something that was very peculiar about this evangelism is that the Church is located in a peripheral area of the city and many people who were in the training and went to the outreach are people rescued from drugs, among them ex-traffickers and “pushers”.

We can state that Heaven touched earth as we entered the slum from where many of those who were evangelizing had come from. It was very glorious to see those men, women and children who some time ago were slaves of Satan, imprisoned by drugs and trafficking, now for many of them returning to the shantytown for the first time after their conversions. The difference is that before they were there because of drugs, but on Sunday the 15th they entered there as soldiers of the Lord’s Army, to preach the Gospel with power and authority, praying for their families, healing the sick and preaching the Gospel boldly. It was so powerful!
. .
Influential drug dealer surrenders to Jesus and holds service in her house

In the evening, the evangelistic meeting was tremendous. Many healings and deliverances that I will specify below, but among the many cases there was one lady who, while I ministered from the platform, felt a great warmth in her body. She said there was a fire inside her. I did not know her.

At the end of the service, the pastor came to me and told me that that lady, 61 years old, who was out there in the front and who had been deeply touched by the Lord Jesus, was one of the very influential drug dealers in the region. In conclusion, that lady surrendered her life to Jesus, along with 12 other people in the temple, besides those who surrendered to Jesus in their homes, and she immediately abandoned the trafficking and in the same week they had already held a service in her house. See the testimony below. Glory be to God!
.

Among the cases of healing and deliverance we can list the following: Healing of headaches, knees, arms and shoulders, neck, tuberculosis, spine, fibromyalgia, tendon, respiratory allergic crisis, lumbar, feet, joints of the feet, hearing loss, lump in the ear, myositis, sinusitis, diabetes, in addition to the ills of the soul, depression, sadness, anguish.

Once again we have seen the tremendous work of Jesus Christ, who is the same yesterday, today and forever.”