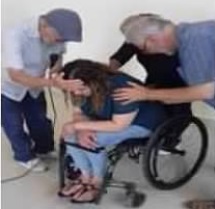 Dear Friends, Supporters and prayer Partners! I am able to return to Elijah Challenge training after the COVID hiatus from March 2020. This is my first adventure and it is one to remember. Rose and I were stretched from being able to travel to becoming fund raisers and promoters of our partners in the “front lines” of underground ministries! Thank you all for partnering with us!

My flight was delayed out of Canada and I was to overnight in Los Angeles. I was given a hotel about 7pm in L.A. and was hoping to get there early for a swim. My bags arrived on the belt at 10pm and I had to be up at 3am for my flight. No swim. The vouchers for food did not work for breakfast. After 2 hours I found an agent that validated the voucher. By this time Facebook had blocked me too.

I landed in El Paso early and was picked up by my pal Pst. Chuy. He was excited to see me but had said the training in El Paso was cancelled and we would go directly to Juarez on foot across the border. Temperature stayed at 38c for the whole trip, no a/c except in malls.

We waited for our ride to come and pick us up at the customs site just past the border crossing. Sitting on the curb beside us was 7 “Mexican’s”?  I started a chat with them and found that they had some aches and pains. One fellow allowed me to place my hands on his back and I commanded healing. Instantly he was pain free! Then a lady said she was addicted to Chrystal Meth and wanted help. I ministered to her. She said she felt great but no way to tell if she was healed. Next 2 fellows with Acid reflux pain asked to be healed and again both were pain free. The last fellow asked for help as he had pain throughout his back and struggled to walk due to knee pain. His flexibility had returned and was pain free! We talked about the love of Jesus and that is why they were healed. ALL 7 became followers of Jesus as Pst. Chuy explained the Gospel to them. Then they headed off to the American border hoping to immigrate as they were actually from Guatemala! A very good afternoon for us! 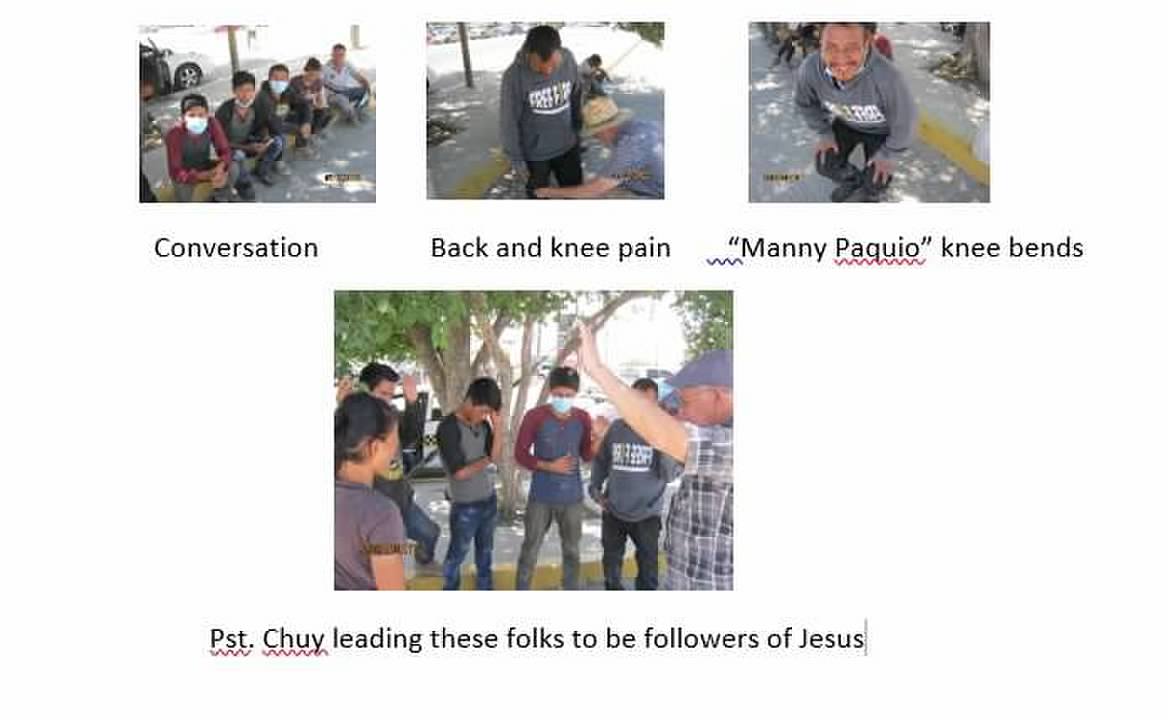 The next few days were spent preparing to travel to the Chihuahua Mtn’s. I was kept busy by drumming at an evening community crusade, sharing about our ministry at a Revival/Training Camp with many known Mexican speakers. This was quite an honor as I was given an hour to share with pastors about The Elijah Challenge ministry, the Great Commission and our “Jungle Adventures”. On The next Sunday I did a mini “TEC” training at a church. 8 folks were healed and about the same came forward for salvation. Buying food kept us occupied as we continued to prepare for our trip to the mountains.

WEEK 2:  We left Juarez on Tuesday at 4am as it would be about a 12-hour drive to our target village in the Chihuahua Mtns. Our transportation was a 2002 Ford crew van with over 350,000 miles! No A/C, 7 people, food and bags. WE ARE ON OUR WAY!! The training would start on Thursday and continue for 4 days and then leave after the service on Sunday.

What “I” did not know: the area where we needed to go through is where the Cartel’s grow their drugs and currently there was a “war” going on in the area. 3 Army check points were in place before our target village as 2 Catholic priests had been murdered because some Gang members hid in their church and the other Gang had the priests murdered to send a message! When we finally did pass through the 3 check points the Army had 9 of 11 in custody. There was only day travel. Travel at night was turned back.

BUT before reaching this area:   6 hours outside of Juarez the truck started acting strange and 5 minutes later we stopped as we had no power. Our driver Martin pulled some pieces off the engine to find a loose wire. He simply pushed it back in place and we were off! I am now the driver! [Point of interest is we traveled on a non-toll road which translated means a little farther to travel, can be a little more dangerous at night but no fees to pay!!]  After 20 minutes of driving, the whole truck electrical went dark, no power, nothing. We coasted to a stop and pushed ourselves off the road. Again, Martin looked under the hood, Google said to check the fuses. Sure enough, a fuse was blown. We had no fuses. A call was made to Pst. Gabriel in the Mountains. He made a call and in 20 minutes a truck showed up with “Jehovah Jireh” on the door! Eric, our angel from nowhere had some fuses. After checking ALL the fuses, he replaced the blown fuse, gave us extras and again we were on our way. I am still driving! He did mention that due to gang wars maybe God did not want us to go…? After another 20 minutes another similar breakdown and we again pushed the truck off the road. The new fuses did not start the truck. Another phone call and again Eric showed up with a partner and a tow rope. The company Eric worked for had decided that we are going back to his town, Cuauhtémoc, and stay there until the truck was fixed. 3 days later we are back on the road, but not with the truck. Eric’s boss, paid for the truck when it was fixed, AND 3 days in a hotel for 7 people, plus meals. He gave 5 adults 5,000 pesos for spending money!

Who is this boss, we are wondering?

The boss was very excited about us going into the mountains as there had never been a seminar there before. I explained what the seminar was about and the next night he had arranged for me to do a mini training at his work place for family and co-workers. Over 30 attended, 12 folks came forward for salvation and 8 were healed, including his mom who had sciatica for years. Pain was gone and all flexibility had returned!

After the meeting I asked the boss about his back ground. Long story short: He and his brother and sister had been leaders of a Mexican drug Mafia for 14 years and all that goes with this lifestyle. For 12 years their mom cried and prayed for her children’s salvation. It was 8 years ago that he became a follower of Jesus. At his 1st crusade, over 5000 people came to hear his testimony. Now he is a CEO/owner of a mine company, employing over 1000!

Leaving the drug trade is very difficult as there are only 2 ways. You are murdered or if you have become a believer, they will watch your life for 1 year and then decide your fate to make sure you are truly a believer. This is a longer story. Please contact me to hear the rest!

On the road again, our truck behind and 4 days late for the mountain seminar, we are off! And 6 hours later, through steep, one lane and partially gravel roads where we needed to back up to let trucks go by, we arrived at our destination!! WE were stopped by 3 army check points on our way.

4 days of training diminished into 2 ½ , but very successful!2 tribes were represented and 1 lady had walked over 8 hours through the forest to the seminar! She has a home church in the middle of nowhere! 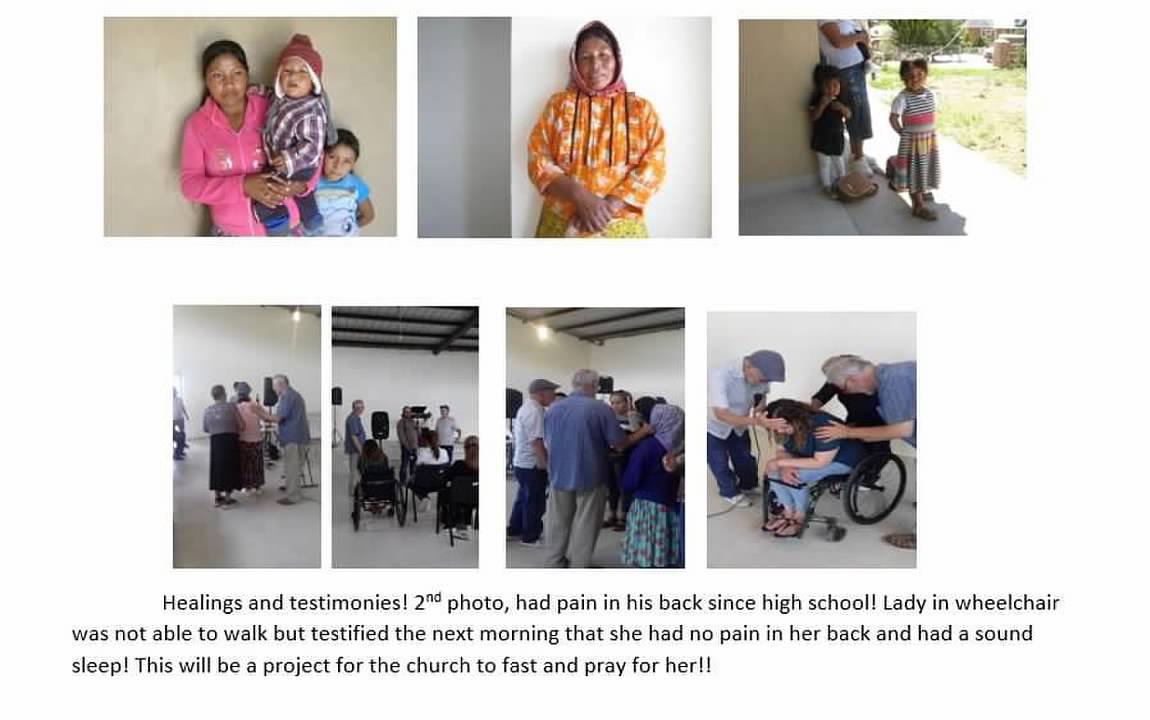 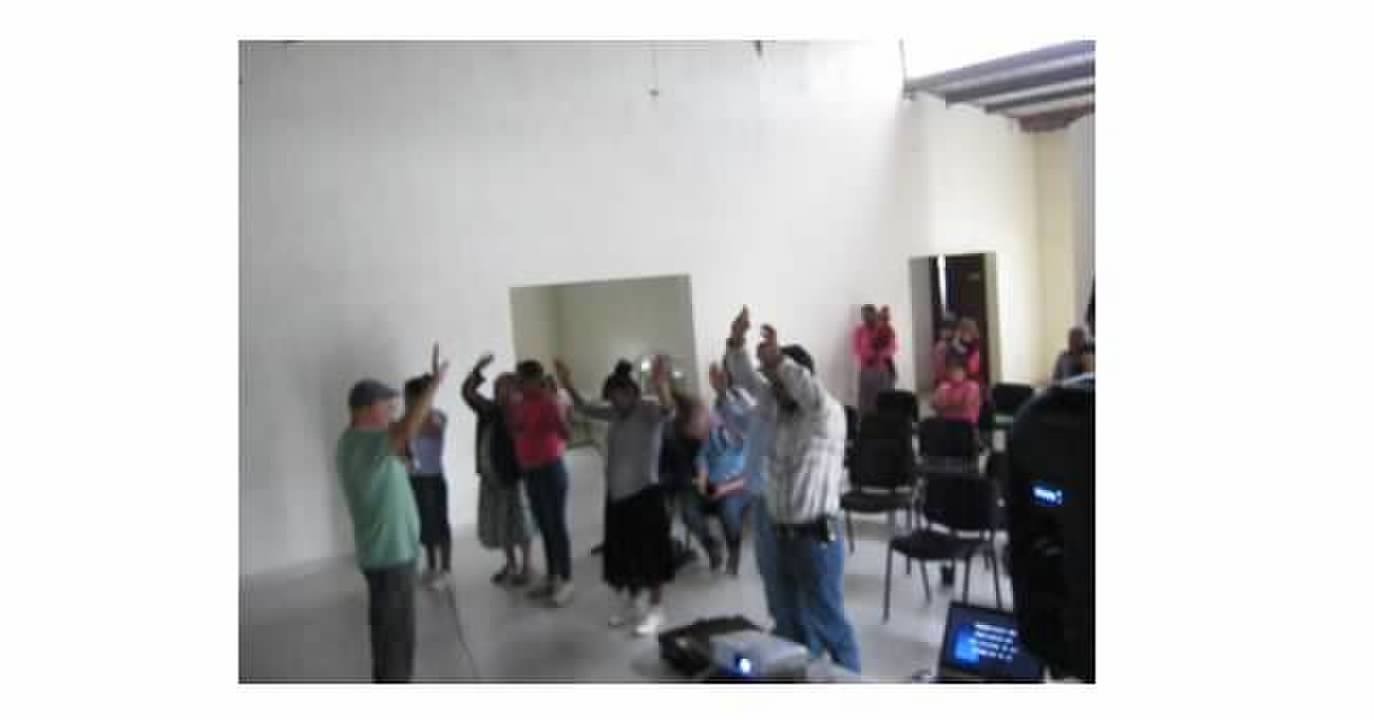 Over 40 Mexican Indians, pastors, and locals attended! 12 came forward for salvation, about 14 healed and 1 manifestation from a pasters’ wife. To minister in this area has been a desire for many years and I learned:

We returned to pick up the faithful truck and spent one more night in a hotel. A new alternator was the fix. On our way back to Juarez we only had 1 flat tire. We arrived after 6 hours in 38c heat and no a/c.

The plan is to return in October to be a part of the boss’ ministry and train folks with the “TEC” course for a few weeks. God willing!

This is just a snap shot of the adventure and I would be happy to share with you more! Please contact me if you would!

God’s best to us all!! Thanks to Rose for letting me go!!