Bikash was a drunkard, addicted to liquor, sick, and paralyzed. But after Jesus healed him, his family accepted Him as Lord & Savior. 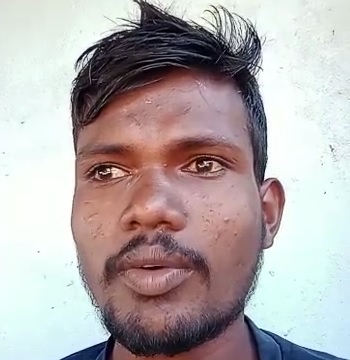 “Greetings to you in Jesus’ precious name! Thank you so much for your intercessory and financial support for the extension of His kingdom here in India.”
.

“Young Bikash (above & below) was a drunkard, hopelessly addicted to liquor. He became sick. Eventually paralysis set in. Admitted to the hospital where he was treated with drugs for a few days, his condition remained unchanged. His family took him home. His father then consulted with a sorcerer who gave him medicine to take. After a few days, Bikash’s condition showed no improvement at all. Then he came to know about one of our house churches. So on two occasions his father took him to attend the service there. There our Elijah Challenge workers ministered to him in the wondrous name of our Messiah Jesus, and Bikash was miraculously healed and set free from both his mental and physical prison. The young man was very grateful to the Lord for the miracle he had experienced. After the gospel was shared with them, he and his family accepted Jesus Christ as their only Lord and Savior.”
.

“Sidhant was a college student who for a few months was completely mentally disturbed. He would beat his parents and others. He would go around naked, endangering himself. His parents had already spent a lot of money taking him to doctors and then to sorcerers, but to no avail at all. His mind was totally disordered. His parents then contacted our Elijah Challenge workers and took Sidhant to their home for ministry. Our workers prayed and ministered to him over a period of a few days. Marvelously, Sidhant was delivered and his mind restored. His father and mother then accepted Jesus Christ.”
.

“Nabi Kisan had a bad stomach infection. After eating he would suffer from indigestion causing him severe pain. He had consulted with a doctor and received prescription medication from a well-equipped government hospital. But after a few days of taking it there was no change in his condition. Then our Elijah Challenge workers ministered to Nabi in Jesus’ name, and, miraculously, he was well. Nabi then accepted Christ and is now following Jesus.”
.

“For a long time a woman named Jai Sri Bag had a problem with her back causing pain. For two months she had been treated by a doctor, but her suffering worsened. Then our Elijah Challenge workers ministered to her in the powerful name of Jesus Christ, and her back was wonderfully healed. Jai Sri then believed and along with her husband accepted Jesus as her only Lord and Savior.”
.

“Anup had a fever for two months. He had already consulted with a doctor and was under his care. But despite the doctor’s treatment the fever would not relent. Two or three times in past years he had gone through the same thing with fever. Then Anup came to know about our Elijah Challenge workers. Then came and ministered to him in Jesus’ name, and the fever vanished. Anup and his family then accepted Jesus Christ.”
.