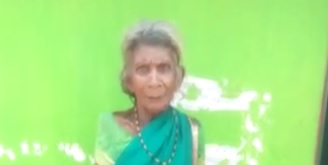 “Thank you so much for your intercessory and financial support. The Lord has been so very gracious to use our harvest workers fruitfully here in India during these very Last Days.”
.

“Two years earlier, Jhila (above & below) was paralyzed following a stroke. Where she lives with an unreached tribal people called the Kobi at the top of a mountain, there are no medical facilities. Since then she had been confined to bed. Our Elijah Challenge workers arrived in her region to share the good news of Jesus Christ. There they ministered to her in the wondrous name of Messiah Jesus. Jhila was marvelously healed, able to walk easily and to eat again. Her entire family accepted Jesus Christ as their only Lord and Savior.”
.

“For a year Gurbari had been unable to raise her hands and to perform any routine functions with her hands. Consultation with a doctor followed by prescription medication had not helped. Then our Elijah Challenge workers came to minister to her, and miraculously her hands were miraculously healed with normal function restored. Gurbari then accepted Jesus Christ.”
.

“Young Sneha had sickle cell anemia for three years. She had been under medication at first, but her condition remained unchanged. Then her parents came to hear about our ministry, and asked our workers to come help. They came and ministered to her with power and authority in Jesus’ name, and she was miraculously healed from the sickle cell. Sneha’s father and mother then accepted Jesus Christ after the gospel was shared with them.”
.

“Mita Kahara had a serious stomach infection for a few months. The pain was so severe that she had difficulty eating. Medication from a doctor was unable to reduce the infection. When our Elijah Challenge workers ministered to her in Jesus’ name, she was miraculously healed.”
.

“A young mother named Nutan was feverish for two months. No matter what was tried, her temperature remain constantly high causing her to become physically weak. Her husband was very concerned since they had a little girl to care for. Then our Elijah Challenge workers came to ministered to her in Jesus’ name, and the Lord healed her. Both Nutan and her husband accepted Jesus Christ.”
.