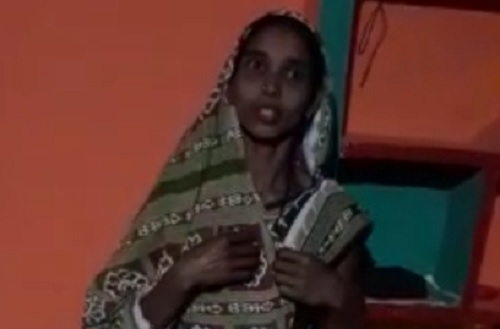 “Thank you so much for your intercessory and financial support for the extension of His kingdom in India. The ministry here is going on very well. Please pray for us as the heat is very severe here in Odisha.”
.

“Rajani (above & below) had a tumor in her chest which had been growing over six months. Her doctor told her that she needed surgery at the city hospital to remove the growth. But her family was poor and they worried that they wouldn’t be able to afford the operation. In the meantime they came across our Elijah Challenge workers and asked for their help. She then attended one of our house churches where our workers ministered to her in the marvelous name of Jesus Christ. The tumor miraculously disappeared. Both Rajani and her husband accepted Jesus Christ.”
.

“A woman named Ahalya Naik had suffered from sickle cell anemia for three years. She had already consulted with and been treated many doctors at several hospitals, but the sickle cell persisted. She also tried various medications but to no avail. Finally her husband summoned a sorcerer to help Ahalya, but he also failed. Then he came to know about the miraculous healings taking place through our Elijah Challenge workers, and so summoned them. When they arrived at their home, Ahalya was in pain. After they ministered to her in the wondrous name of the Messiah Jesus, the pain and all other symptoms of the sickle cell vanished. Both Ahalya and her husband believed and accepted Jesus Christ after the gospel was shared with them by our workers.”
.

“For a long time, Lilima had arthritis causing pain in her legs making it difficult for her to walk. Being quite elderly she thought that she would never get over the arthritis. But she was miraculously healed after our workers ministered to her in Jesus’ name. Lilima put her faith in Jesus as her Lord and Messiah.”
.

“A girl named Jyoti had had a skin disease for a long time. Four times she had consulted with her doctor. Under his advice she was treated with medication for months. But the disease remained. Then when our Elijah Challenge workers ministered to her in Jesus’ name, her skin was miraculously healed. Jyoti’s father and mother accepted Jesus Christ.”
.

“For a month Raju had a fever. Medication failed to bring his temperature down. At that time COVID-19 was on an upswing, so Raju might have been infected with the virus. Then our Elijah Challenge workers ministered to him, and he was healed. Raju believed and accepted the Messiah Jesus. He is now attending one of our house churches.”
.