Elijah Challenge-trained Iraq veteran based in the US reaps incredible, unprecedented harvests in Asia by training harvest workers using Skype 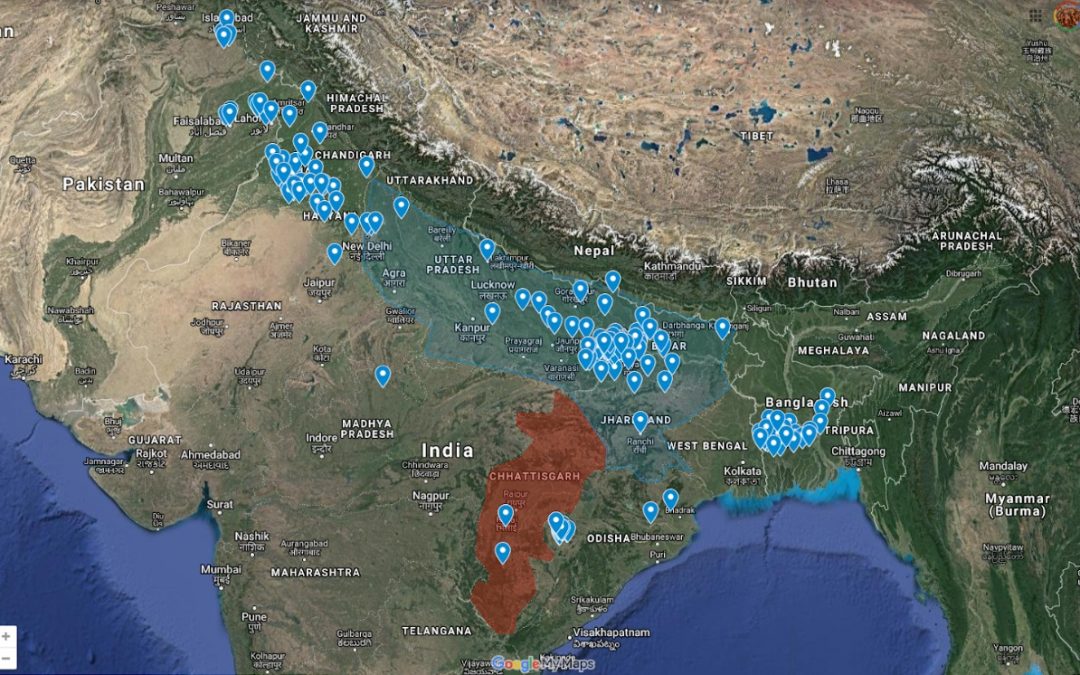 Above is a map of the general locations of the house churches. The light blue highlighted area is where the TV show aired last year. The red portion is where we are aired this year, which is a more densely populated area. We get about 300 calls from people each month.
.
Report from Lucas Leach (onewaymin.com), an Iraq veteran who trained with The Elijah Challenge in 2016:
:
“Right now we have 20 main leaders that plant house churches, train the pastors, and evangelize in India, Bangladesh and Pakistan. Because of another person’s pledge to donate monthly we will be adding 4 more. One in Bangladesh, one in Pakistan, and two in India. We are working on building a training center for all of the new leaders we add each month in Bihar, India. We took an offering from all our house churches in India, which brought in enough money to build a well on the land we purchased, in Bihar. We will be collecting each month to save enough to build it. Right now the majority of the leaders are being trained in a house that is rented, but the owner doesn’t want all of these people staying at his house if they are not paying rent.  Building a training center is our next step to keep up with the growth in Bihar, India, which is our most fruitful state.”
.
“This last Friday I did a training in Delhi, India via Skype on power & authority to use to evangelize and plant house churches. These pastors and lay people had not heard the teaching and are really excited to begin using it. They were especially excited to hear the growth of this ministry in only 8 months.”
.

“Since February of this year we have planted 353 house churches, trained over 400 leaders to lead them, led over 15,000 people to Christ, and have about ~5,000 active members in our churches!”.

Lucas’ 2017 report:  Bihar, INDIA – Even political leaders on the TV news gave glory to God: “this will reach millions”

.
“This excites people because they see the fruit of the ministry and believe it is attainable for them as well. Not only because it makes sense to them, but because they see that it parallels the way the apostles did it starting in the book of Acts and believe it’s the will of God. I won’t be adding these people under the ministry, but have encouraged them to do just as we have done. Three of them have already made plans to train their congregations. One of them tomorrow even! I am excited to watch them grow and see the same fruit we have seen. We are planning on doing another Skype training this month in India and another in Namibia, Africa. I will try to remember to record them to share next month.”
.

“We are continually seeing more salvations each month, now that the average church members are being taught power and authority evangelism. The house churches have slowed down a little this month. This could be because some house churches had been shut down and their pastors thrown in jail in other ministries . See the article here. Thank you for the prayers for the previous persecutions we had faced before, regarding the evangelist being beaten and kicked out of certain villages for fear that they were stealing children. These were false allegations and the village people now see that!”
!
See below for individual results for each country:
.