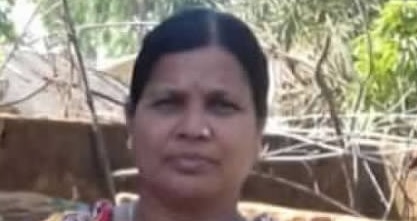 “Thank you so much for praying and supporting our ministry of reaching  the unreached people of India.”
.

Selected reports of many…

“For five long years, Kanta’s (above & below) throat was infected. The frequent pain would make it difficult for her to eat and drink. Regular medicine didn’t help, even various kinds like allopathic, homeopathic and ayurvedic medicines didn’t bring relief to Kanta’s throat. When our Elijah Challenge workers ministered to her in the wondrous name of Jesus Christ, the infection and pain disappeared.”
. “For two years young Ajit Harijan (below) suffered from a migraine headache. He had been prescribed various drugs from different hospitals and the different doctors he consulted, but the pain would not relent. Amit’s suffering eventually culminated in a mental disorder. But then he came across our Elijah Challenge workers who ministered to him in the wondrous name of Jesus Christ. Then and there Ajit’s migraine and suffering ended. He accepted Jesus as his only Lord and Savior.”
. “For two months Chetana (below) was demonized, leading her to hide in the jungle. She would cry, scream, and shout. She couldn’t eat or drink. Her husband summoned a sorcerer, but Chetana fled back to the jungle. One after another other sorcerers, even a temple priest, failed to deliver her from the unclean spirit. But when our Elijah Challenge workers came and commanded the demon to leave in Jesus’ name, it promptly left. Chetana’s entire family accepted Jesus Christ.”
. “Biranchi Behera (below) had painful hemorrhoids for a year. After the medicine prescribed by a doctor failed to bring relief, the doctor advised an operation. But even after the surgery the pain remained, just like before. Then when our Elijah Challenge workers ministered to him, Biranchi was completely healed from the painful hemorrhoids. He then believed in the Lord and accepted Jesus Christ.”
. “Young Manisha (below) had been tormented by demons for three long months. Mantras performed by the priest at the local Hindu temple did not help. Then her husband summoned a well-known sorcerer to their home. Whatever the sorcerer required of them, they did. But nothing worked to deliver Manisha. Finally she was completely delivered from the demons when our Elijah Challenge workers ministered to her in Jesus’ wonderful name.”
.