Woman had broken her leg and could not walk for 3 years. After she was miraculously healed, she accepted Jesus. 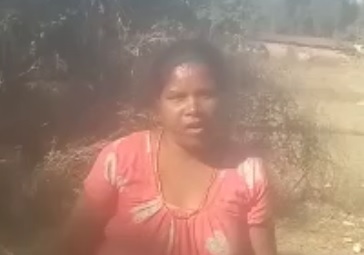 “Thank you so much for your intercessory and financial support for the ministry. Our work in the Lord’s harvest field here in India is going on very smoothly.”
.

“Three years earlier Mina Kullu (above & below) had broken her leg in a bad fall. Since then, for three years, she had not been able to walk. Even after being treated with prescription medication by a doctor for a long period of time, she still could not walk. Then our Elijah Challenge workers approached her and ministered to her in the name of our Messiah Jesus with supernatural authority and power. The Lord touched her and she was miraculously healed, able to get up and walk normally. After the gospel was preached to them, Mina and her family accepted Jesus Christ as their only Lord and Savior. The second video below shows Mina walking again.”
.

“Young Namita Munda (below) had jaundice and other physical problems as well. Her father took her to the hospital where medicine was prescribed for her. But after taking it for one month, her condition actually worsened. Her father then took her to a better-equipped hospital for treatment, but to no avail. Then her father brought her to one of our Elijah Challenge house churches where our workers ministered to her in the name of Jesus Christ. Namita was miraculously healed. After that the entire family accepted Jesus Christ.”
.

“A woman named Susama Bhaisal (below) was demon-possessed and totally out of control. Often she would run to the jungle and beat her parents, causing a huge problem for her family. Her husband summoned a sorcerer who came and spoke many mantras over her, but completely in vain. The demon would not leave Susama. Then our Elijah Challenge workers came and in the name of our Messiah Jesus commanded the demon to leave Susama. The demon then obeyed and left; she was totally restored. Susama then accepted Jesus along with her husband.”
.

“For a long time Bhitiri Munda (below) had an issue of blood. Long-term medication did not help at all. She had also taken both ayurvedic and homeopathic medicines, but the bleeding continued. After her husband had spent a lot of money on the various treatments, our Elijah Challenge workers came and ministered to Bhitiri in the marvelous name of Jesus the Messiah. She was then miraculously healed from the issue of blood. Both Bhitiri and her husband then put their faith in Jesus Christ.”
.

“Arati (below) had a severe deficiency with her eyesight as well as debilitating pain from her waist down. For three years she could not see objects at a distance despite taking medication for a long time. Then our Elijah Challenge workers came and ministered to her in the wondrous name of our Messiah Jesus. Arati was miraculously healed. Her eyesight was restored and the earlier pain from her waist down was gone. She then put her faith in Jesus as her only Lord and Savior.”
.