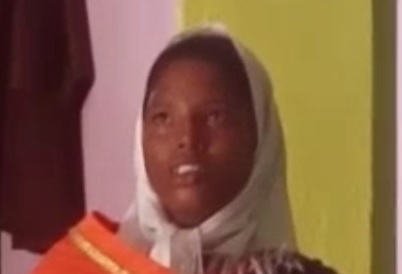 “Thank you so much for your intercessory and financial support. Praise the Lord for the precious souls added in His kingdom each and every day through our harvest workers here in India.
.

“After seven years of marriage, Nirupama (above & below) had not yet conceived — a terrible stigma in Indian culture. Her husband had taken her to various hospitals and she had been under medication for months. But she remained barren. Then her husband took her to the Hindu temple where the priest performed mantras and gave her medicine. But after months Nirupama still could not conceive. Her parents-in-law began to despise her for her inability to provide descendants for them. Then she heard about our Elijah Challenge ministry and began attending one of our house churches. There our trained workers ministered to her in the potent name of Jesus Christ. She is now in her third month of pregnancy. Both Nirupama and her husband have accepted Jesus Christ.”
.

“A woman named Asrita had been attacked by a demon and was severely demonized. Her behavior included shouting and screaming even at people who just happened to be stopping by at their home. Her family had no choice but to tie her up in a room in their home. She had totally lost her senses and was out of control. Then our Elijah Challenge workers came by to minister to her. In the wondrous name of Jesus they commanded the demon to leave, and Asrita was miraculously delivered and restored to her right mind. Both she and her husband then accepted Jesus as their Messiah.”
.

“A man named Dhanram Majhi suffered from severe arthritis, making it very difficult for him to walk and to work. He had been admitted to the hospital for treatment. But the treatment proved ineffective and Dhanram went home in even worse physical condition. His family, fearing that he might not survive, was terribly distressed. Then our Elijah Challenge workers came and ministered to him in the wondrous name of our Messiah Jesus. Dhanram was miraculously healed from the arthritis. After that he and his family accepted Jesus Christ as their only Lord and Savior.”
.

“A young woman named Dubidha Barla had a bad case of hemorrhoids. She had been away from home doing her studies and living at her school hostel. But with the severe pain and discharge of blood she was hospitalized. But even with the treatment there her condition did not improve, and Dubidha had to be taken home. Then our Elijah Challenge workers were summoned to her home where they ministered to her in the marvelous name of Jesus Christ. Dubidha was then miraculously healed from the hemorrhoids. Her family believed in Jesus and accepted Him as their Messiah.”
.

“For a long time a young mother named Kuni had problem breathing. Long-term prescription medication had not helped her condition. But when our Elijah Challenge workers came and ministered to her in Jesus’ name, her breathing was miraculously restored. Kuni then believed and accepted Jesus Christ.”
.