Little boy could not be taken to hospital due to uncontrollable seizures, but in the wondrous name of Jesus…PLUS cancer vanishes from woman’s stomach 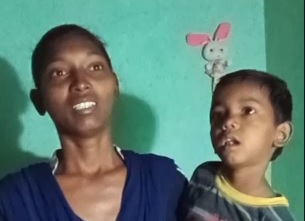 “Greetings to you in Jesus’ precious name. Thank you so much for your intercessory and financial support for the ministry here in Orissa and in India.”
.

“For the past few years, a young boy named Punam (above & below) suffered from terrible seizures. Finally, one day the seizure was serious and he lost consciousness. His parents, unable to take him to the hospital due his wild convulsions, feared for his life. His mother rushed over to the home of one of our trained harvest workers. Immediately our workers went to their home. With supernatural authority and power in the wondrous name of our Messiah Jesus they ministered to the boy. The seizures then ceased and Punam regained consciousness. Both his mother and his father than believed and accepted Jesus as their one and only Lord and Savior.”
.

“A young lady named Rosni Sidar (below) would experience severe pain in her stomach. At the hospital she underwent an examination, after which the doctor informed her that she had cancer in her stomach. He prescribed medication for her which she took for a long time. But she did not recover. Wonderfully, however, after our Elijah Challenge workers came and prayed over her in the name of our Lord Jesus, Rosni’s pain disappeared. Her doctor later confirmed that the cancer was gone from her stomach. Both she and her husband then accepted Jesus Christ.”
.

“For a long time, Puspa Hansda (below) had been unable to sleep on the left side of her body due to pain on that side. Our Elijah Challenge workers came and ministered to her with power and authority in Jesus’ name. The pain instantly vanished. Puspa then believed and accepted Jesus Christ.”
.

“From time to time, Smita (below) would be attacked by a demon and would fall ill. The medical report from her doctor came back negative stating that her health was normal. After a few months of the attacks, she ended up spending most of her time in bed. She could no longer talk normally. Then our Elijah Challenge workers came and commanded the demon to leave her body in the marvelous name of our Messiah Jesus, and the demon left. Smita was marvelously delivered from the attacks. She then believed and accepted Jesus Christ.”
.

“For a month, Juli (below) suffered from a fever that would not relent despite taking the medication prescribed for her. But after our Elijah Challenge workers came and ministered to her in Jesus’ name, the fever vanished from her body. Juli then accepted Jesus Christ along with her husband.”
.