Report on 2007 trip to Ivory Coast

Bishop Adebayo Adedimeji of Burning Bush Ministries International was our host in Abidjan, the capital city of the West African nation of Ivory Coast.

Brother Adebayo shared with me the difficult times he and the church suffered during the terrible civil war in Ivory Coast which ended last year. The war is now over, but it has left its mark on the Church in Abidjan. I was told that there is little evangelistic fervor. Believers are just trying to survive and recover from the scars of the recent civil war.

The Lord’s grace was wonderfully evident at the first Elijah Challenge Training session. A few hundred pastors, leaders, and believers were present. I taught them how Jesus healed the infirm 2,000 years ago, and that He promised that we would do the same works in John 14:12.Then for a demonstration of healing I asked for people with heart conditions to come forward. Four women and two men came forward.

I then called for two believers to minister to each person at the front. They laid hands over the heart of each person, and then repeated the commands after me. Afterwards we tested each person to see if there was any change in their condition. Each one testified of a definite change in his or her condition, some even physically feeling the Lord’s power at work on their heart to heal and remove infirmity. I had each person run all the way to the back of the spacious auditorium and then back to the front. Each person testified that their heart felt fine and normal after running—something they could not do without adverse consequences before being ministered to.

God’s grace was very evident at the Healing Service on the evening of the second day. After I shared the gospel, the trained disciples came forward to heal the sick in fulfillment of Isaiah’s prophecy concerning the work of the Messiah for those who believe in Him:

Isaiah 53:4 Surely he took up our pain and bore our suffering, yet we considered him punished by God, stricken by him, and afflicted. 5 But he was pierced for our transgressions, he was crushed for our iniquities; the punishment that brought us peace was on him, and by his wounds we are healed.

After the very first time of ministry nearly all of the infirm people who had come forward to be healed stepped up to testify that the Lord had indeed healed them. Quite a few of them even described physically feeling the Lord’s healing power (“dunamis” in Greek) at work in their bodies to heal them.

Mark 5:29  Immediately her bleeding stopped and she felt in her body that she was freed from her suffering. 30  At once Jesus realized that power (“dunamis”) had gone out from him. He turned around in the crowd and asked, “Who touched my clothes?”

One after another those who had been healed gave glory to Jesus Christ. Their testimonies proved without a doubt that Jesus had in fact been pierced for their transgressions and crushed for their iniquities as he hung and died on the cross for us 2,000 years ago.

The God of Elijah sends the fire of healing

At the final service, as in the time of the prophet Elijah, the Lord sent the fire of healing to stir His people to repentance and bring them back to Him. The miraculous healings were quick and powerful as the trained African disciples ministered to the infirm. Nearly everyone who came forward to be healed testified. As at the first evening service, many of them shared how they actually felt the Lord’s healing power (the “dunamis”) at work in their bodies to heal them as the disciples laid hands on them.

People were healed of both long-term and acute conditions. Some who because of severe pain could barely make it to the service afterwards testified with gratefulness that the Lord had completely healed them. One young man with a heart condition (tachycardia) which had left him weak and tired was able to sprint to the back of the auditorium and back to the front with a wide grin on his face—feeling fine and normal.

It was an impressive display of power from the Lord through his African disciples meant to prepare His people for the great and terrible Day of the Lord. With one heart the people repented of their fruitlessness and came back to the Lord.

Dramatic manifestation of the Lord’s power on Sunday morning

Sunday was our last day of ministry in West Africa, and I ministered at the Sunday worship service of a congregation called Mountain of Deliverance.

I gave them an Elijah Challenge crash course. Then I proceeded to the demonstration of healing, calling for people with heart disease to be healed. A thin petite woman in her late thirties or early forties came forward. She was so weak that she could barely describe her condition to us. She was clearly in physical distress. I don’t recall ever seeing someone with such severe symptoms of heart disease come forward for healing at a demonstration. Two sisters sitting in the front row come forward to lay their hands over her heart. Then I led them in exercising the Lord’s authority over the disease. I watched her face as they ministered to her. At first I saw pain, then it gradually disappeared from her face as they ministered.

Then I asked how how she felt. “OK,” she replied in French. Then I told her to run to the opposite wall and back. She took off running briskly, returning to us with a smile. She did it again for good measure. There was no sign of her earlier distress or shortness of breath, and she appeared normal. She testified with visible emotion that the Lord had healed her.  The congregation exploded with praise to the Lord for several moments, some unable to restrain themselves and jumping up from their seats. It was one of the more dramatic demonstrations I had witnessed.

Then several other people with symptoms in their heart came forward to be healed. Believers came out of their seats and ministered to them with power and authority. All of them testified that their symptoms had disappeared.

Lunch with the Vice-President of Gabon and her pastor

After the service my host Bishop Adebayo took me to lunch at a restaurant in a very nice area of Abidjan where a party of very elegantly-dressed people joined us. I was told it was the party of the Vice-President of the African country of Gabon. In the party was also her pastor, Esther Essymba and Esther’s husband Michel. Over the dinner table Bishop Adebayo, speaking French, shared with them about the impact of The Elijah Challenge. After hearing what he shared, Pastor Esther graciously invited us to Libreville the capital of Gabon to teach in her church on a future occasion. Her church is one of the more influential churches in Gabon, with not only the Vice-President but also Cabinet Ministers attending the church. 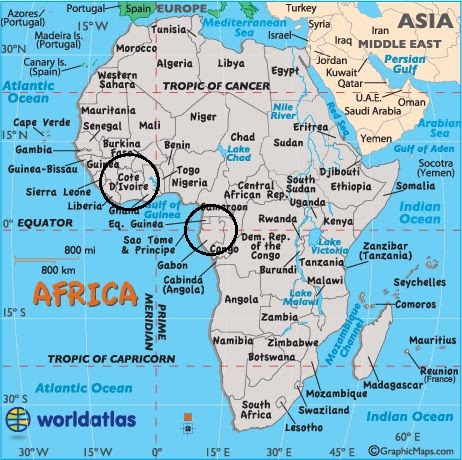 Follow-up Testimonies in May 2012

These are the testimonies we have registered after the Elijah challenge seminar in the headquarters, in the Burning Bush branches of Marcory and Treichville.

Mrs Sahué was suffering from an unknown illness for a certain time. She planned to go to the hospital but faint many times.

On Sunday she decided to come to church despite this illness. The deacons were ready to see her along home because she was very weak. But she decided to stay and receive ministration when the bishop called all the sick to be healed by the trained workers. While receiving ministration, she noticed that something was moving from the bottom to the top of her tummy. She felt a release and started to walk and ran for 10 minutes helped by the bishop; After 10 minutes she was totally free and was able to handle a staff meeting the following day without feeling any dizziness! She is totally healed up till now.

A man was ministered to because he was complaining of ulcer pains. After ministration, the Lord revealed to the bishop that the man should stop eating late in the evening in order o maintain his healing. He is now free from ulcers!

A brother was suffering from asthma for a long time. And on Sunday during the service, at the moment of ministration, he was ministered to. He was healed instantly from asthma.

A woman suffering from ulcer for 3 years was instantly healed when she received ministration during the service on Thursday (Victory service).

Giles Alphonse was suffering strong abdominal pains due to holes in his lungs. He was supposed to undergo surgery on Monday but decided to come to church on Sunday to receive ministration from the trained workers during the service.

He was breathing painfully and noisily. After ministration, the pain vanished and the noise stopped instantly! He was healed and did not have to undergo surgery anymore!

Kobena Annick was suffering from asthma for 5 years. After ministration she did not feel the pain or the symptoms anymore. She is eating now what she was not allowed to eat because of asthma and she is in perfect health.

We are witnessing instant healings and wisdom of God to maintain the healing.