BLAST FROM THE PAST: 600+ disciples go door-to-door in idol-worshiping stronghold preaching the gospel; 1,920 healed & 1,440 accept Christ in one week 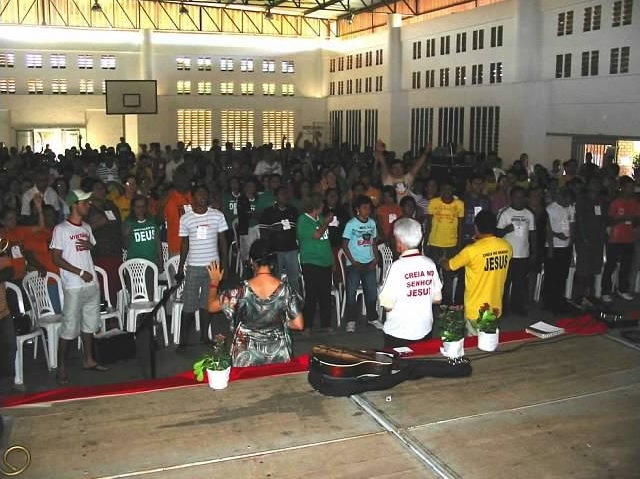 Reports: The Elijah Challenge in Brazil
. Juazeiro do Norte, the 2nd most idolatrous city in Brazil, is located in Ceará, a state in northeast Brazil — the largest country in South America in terms of area, population, and economy. It has the fifth largest population in the world.

Summary for the week for adults (children separate)

I had been told that Juazeiro do Norte is the second most idolatrous city in Brazil. Although people here consider themselves Catholics, most of them worship a deceased man named Father Cicero. He is acknowledged to have founded the city in the 1930s. He was a Catholic priest, but because of his claim to have performed a miracle of turning bread into blood which the Church could not substantiate, he was eventually excommunicated by the Pope and the Catholic Church. Eventually he became the mayor of Juazeiro do Norte. Now he is considered a saint by the local residents, and they pray to him. There is a large, 27-meter statue of him on top of the mountain range overlooking the city. Devotees are known to crawl on their knees kilometers on cobblestone streets snaking up the mountain to fulfill their vows to him. Every November around his birthday, a half million people come flocking into the city from Ceara and the surrounding states to celebrate the event.

We were faced with a challenge here—similar to the challenge which the prophet Elijah faced in his time with nearly the entire Israelite nation backsliding to worship Baal.


First, the restoration of unity

On the first night many of the local pastors came together under the leadership of our host Pastor Jonathan Ferreira of the Visitation of God to wash one another’s feet and to take Holy Communion together. There was restoration of unity within the Body of Christ. Moreover, 24-hour prayer for Juazeiro do Norte had been going up to the Lord for 40 days. The prerequisite preparations are being laid for the actual battle to begin son against the powers of darkness here.

The following night—likely for the first time of the history of the Church in Juazeiro do Norte—all if not most of the pastors and congregations of the city came together. Prior to this there was little unity between the mostly small, struggling churches of the city. Over one thousand believers from the churches gathered to partake of the Lord’s Supper served by the pastors of the city, aided by many pastors from other cities who have come to Juazeiro do Norte to participate in the Visitation of God. It was an historic time of celebration and unity for the body of Christ in Juazeiro do Norte.

Elijah’s challenge to the servants of Baal

I was given the opportunity to share. The great darkness in Juazeiro do Norte, I told them, reminds us of the situation Elijah faced in Israel when most of God’s people were deceived into worshiping Baal. But I believed the Lord was about to fulfill in Juazeiro do Norte Malachi’s prophecy at the end of the Old Testament.

Malachi 4:5 See, I will send you the prophet Elijah before that great and dreadful day of the LORD comes.

Just as the Lord used Elijah to bring the idolatrous Israelites to acknowledge Him as God after the great miracle at Mt. Carmel, so would He restore the spirit and power of Elijah—the boldness and power that come from the Holy Spirit—to the Church in Juazeiro do Norte in these last days to bring the idolatrous city back to the Lord. I invited the people to attend the Basic Training to begin on the following morning to learn how to heal the sick and cast out demons as Jesus taught and commanded his disciples when he sent them out to proclaim the kingdom of God to Israel. Perhaps 600 disciples gathered for the first session of the Basic Training, with over half of them local believers and the rest from out-of-town. They were unusually zealous for the Lord and received the teaching from Scripture with great exuberance. During the last half hour of the Training I had them come forward to lay hands on those with infirmities. After two rounds of the exercise of authority over the infirmities by the disciples, a total of about twenty people came forward to testify that the Lord had healed them. Some of the testimonies appeared quite dramatic.

After the session was over, a man approached me. He had a painful heart condition. Because of that his doctor told him he could not run or even jog. I laid hands on his heart and rebuked the infirmity, commanding his heart to be healed in Jesus’ name. Then the man took off and jogged around the front of the auditorium. He returned to us and reported that he felt no pain whatsoever. He took off and ran around a second time. His heart felt fine.

After lunch the disciples went out, going door to door to heal the sick and preach the gospel.

At the beginning of the second morning of training, I asked the 600 disciples who had witnessed God’s power to heal through them as they went from home to home yesterday afternoon to share the gospel. I was amazed to see a sea of hands go up! The Lord is indeed faithful to fulfill His word through these bold and obedient disciples.

One bold brother who has preached the gospel on the street shared some very powerful miraculous healings which took place in the home of a family of devoted idol-worshipers. Even after experiencing miracles, they were reluctant to repent and believe on Jesus because they had been told that their god would get revenge on them for forsaking him. But after some encouragement the family changed their mind and decided to believe on Jesus.

The fifth and final session

At the final session I did not feel like holding a demonstration of healing at the end of the meeting. The disciples had already had ample opportunities to heal the sick at the earlier sessions and each afternoon they had gone from door-to-door praying for people, healing the sick and sharing the gospel. So Friday morning I thought I would simply wrap up the week-long Training with teaching only—without having the disciples minister to the infirm.

But my host pastor Jonathan requested that we minister to the infirm since quite a few of them had shown up wanting to be healed. I agreed, but would add a twist. I told the people that I would leave early and leave the healing up to them. I looked over at my young interpreter Ricardo by my side who had been translating for me faithfully all week. I told the people that Ricardo would lead them from the stage during the healing ministry instead of me. By faith I boldly told them I expected that people would be healed just as they were when I was present on earlier days. In fact, I said I would be disappointed if they were not.

So I packed up my laptop and made my way out of the auditorium as Ricardo mounted the stage and called the infirm and the trained servants of God forward to the front. It was in the Lord’s hands now.

Later that day I heard that the Lord had moved powerfully as the brethren laid hands on the sick after I left. One man with a tumor/growth bulging in his abdominal area found it flattening out and could no longer feel the tumor. He testified through tears. One elderly woman hobbled by pain was leaping up and down pain-free. Twenty to twenty-five people testified that the Lord had gloriously healed them. Praise the Lord for His faithfulness in performing His word. “Those who believe on Him will do the works that He did.” (John 14:12)

Final day of outreach at Juazeiro do Norte

When the 600 trained Brazilian disciples went out to the streets around the city plaza Saturday morning to heal the sick and preach the gospel, many people with infirmities were healed. This on the heels of several hundred infirm people who were healed in their homes as the disciples went from home to home in the city over five afternoons proclaiming the kingdom of God.

On Saturday evening, we held a large evangelistic healing service. (See the photo below.) I preached the gospel from John 14:6, and then the Lord confirmed the word through many testimonies of healing as the trained pastors and disciples ministered to the infirm with power. A handful of people came forward out of the crowd of mostly believers to accept Christ as Lord and Savior after hearing the testimonies which confirmed the gospel. Perhaps there had never been such a meeting in the history of this city which has been given over to the worship of the local god “Father Cicero”.

This is just the beginning for the believers here as they seek to take this idolatrous city for the kingdom of God.

Data for the adults

Number of participating disciples from other cities: 290

Number of participating disciples from Juazeiro: 330

Average number of homes visited by each team per day: 9

Number of people who accepted Christ: 1,440

Data for the Children’s Ministry

People from other cities who helped with the Nursery: 30

People from Juazeiro do Norte who helped: 85

Total number of children in the Seminar during the five days: approximately 530

Total number of children reached for the Seminars and in the Schools: 1300

Number of homes taken care of (including shelters): over 700

Number of people reached: About 2000—including children, adults, employees of the schools and shelter

Number of miraculous healings & Number of decisions for Jesus: We do not have accurate numbers. But each day there were about 450 children and teachers praying and ministering in the streets, divided into groups. Each one of these groups reported miraculous healings and conversions to Christ.

Reports in the aftermath of the Training

-Pastor Ivan Ribeiro of the Juazeiro do Norte Ebenezer Church

[Rough translation with help from Google: “The miracles started happening in the church in evangelism and even more in small-scale. I’m training church leaders more, I’m already seeing miracles happen through their lives with laying hands on the sick. I know I’ll give more testimonies to build faith. What God is doing is beautiful.”