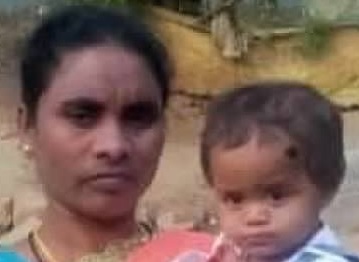 “Greetings to you in the precious name of Jesus. We rejoice to witness the work of our harvest workers in the various regions where we have sent them. I feel it is important to visit them periodically to encourage them and to make suggestions for further development of their work.”
.

“Tapan (above & below with his mother), a 6-month-old infant, had a high fever. One evening at midnight he lost consciousness. His alarmed parents were at a loss what to do for their little one so late at night in their village. But it happened that our Elijah Challenge workers lived nearby. Tapan’s parents called them and our workers immediately left for their home. After they ministered to Tapan in Jesus’ name, he regained consciousness. His relieved and thankful parents accepted Jesus.”
. “Mandakini’s (below) right hand and arm had been paralyzed for months. She couldn’t raise it and she had not been able to do any work with that hand. The doctor had under medication, but there was no change. Then our Elijah Challenge harvest workers ministered to her in the name of Jesus Christ, and her hand and arm were miraculously restored. Mandakini received Jesus Christ.”
. “A 75-year-old man named Damodar Sahu (below) had debilitating arthritis for a long time rendering him unable to walk or even sit. He had been receiving medication for a long period of time, but his condition worsened day by day. Then our Elijah Challenge workers ministered to him, and the elderly man was miraculously healed from the arthritis. A grateful Damodar accepted Jesus as his only Lord and Savior.”
. “Prabha (below) had periodic seizures during which she would lose consciousness. Lifelong medication did not help. But when our Elijah Challenge workers ministered to her in Jesus’ name, the seizures ceased. Prabha put her faith in the Lord Jesus Christ.”
. “For two months a young man named Kartik (below) was mentally disordered. He had no idea what he was doing or where he was going. His dear parents were beyond distressed for him. Our harvest workers then went and ministered to him in Jesus’ wonderful name. The Lord healed him, and Kartik’s mind was restored to normal. His parents then put their faith in our Lord Jesus.”
.