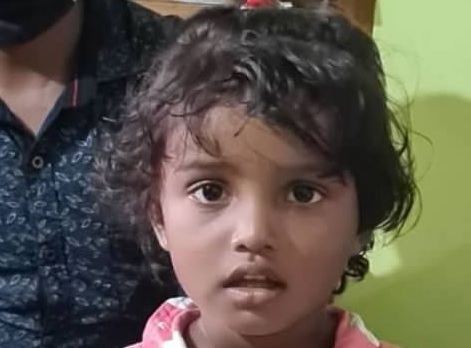 “Greetings to you in Jesus’ precious name! Thank you so much for your intercessory and financial support. We are praying regularly for you and all the partners of The Elijah Challenge.

Even though COVID-19 infection rates appear to be low, the death rate is very high in Orissa. Please continue to pray for us.”
.

“A four-year-old child named Nebedita Hanns (above and below with her father) lives 50 kms from us in an unreached village. A week ago she developed pain in her stomach. Her father took to her to see a doctor who prescribed medicine for her. But the stomach pain increased until it was unbearable for the little girl. She would cry unceasingly. Medicine didn’t alleviate the pain. For a week the pain kept Nebedita awake at nights…she could only cry through the night.

Finally, through a believer her family heard about our ministry, and her father called me. As I ministered to her over my phone with authority rebuking the pain in the name of Jesus, she was crying. Then she shouted “I am going” and she kicked the phone in her father’s hand. At that moment we understood that it was the work of a demon. The piercing pain then disappeared, and little Nebedita was well. Later her father brought her to our home in Bhawanipatna. He acknowledged that Jesus is a very powerful God, His mighty name delivering his daughter even as I ministered over the phone. He believed and accepted Jesus as his only Lord and Savior.”
. “For the past few years, a Hindu woman named Patel (below) had a mental disease. She was unable to sleep, even at night. She was overly talkative, and would leave the house without informing anyone. And her husband would beat her. Patel was brought to us by some believers. We ministered to her in Jesus’ name and talked with her, but no change was apparent. Nevertheless we asked her husband to stop beating her. Surprisingly, when they arrived back at their home, Patel was completely delivered and her normal self again. Praise the Lord! Now she and her husband believe in Jesus Christ.”
. “Deepa Harijan (below) had the dreaded COVID-19. The symptoms of fever, cough, and cold racking her body would simply not subside, and she was anxious beyond measure. Her husband then called our Elijah Challenge workers to their home. They went and ministered to Deepa with great authority in the name of Jesus Christ. The Lord healed her, and subsequently Deepa and her husband both accepted Jesus Christ.”
. “Tukulu Bag (below) had uncontrollable shaking in both of his legs, making walking difficult. After consulting with a doctor, he was put under medication for months. But the shaking worsened. Tukulu then met with our Elijah Challenge workers and asked for help. As they ministered to him in the name of Jesus, the Lord touched him. The shaking promptly ceased and and Tukulu was able to walk normally again. He believed in our Lord Jesus and accepted him as his Savior.”
. “For weeks, Juli Harijan (below) had stomach pain so severe that she couldn’t even walk, for weeks she had to crawl. She was taken to a specialist for treatment, but the pain stubbornly persisted. When our Elijah Challenge workers ministered to her in Jesus’ name, the pain vanished and Juli was well. She believed and accepted Jesus as her Lord and Savior.”
.