REVIVAL in Malaysia: saving indigenous Christians from the authorities 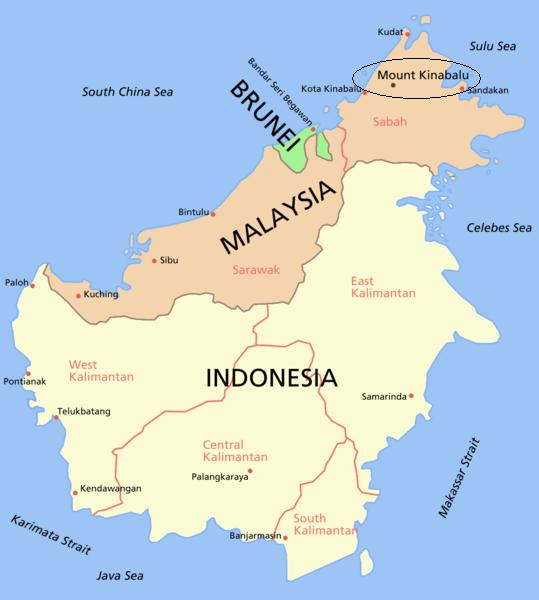 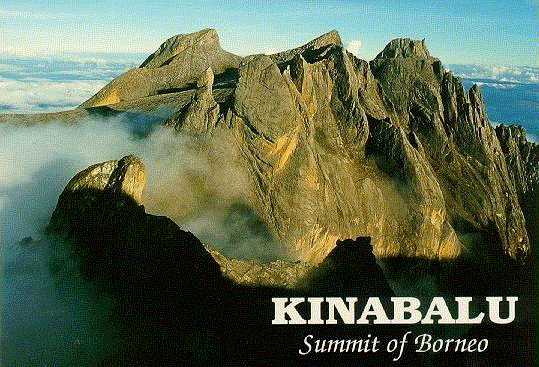 The first day of the Basic Training

This Elijah Challenge event was held in the town of Ranau, situated in the valley at the foot of mighty Mt. Kinabalu in the state of Sabah. Our host was Sidang Injil Borneo (SIB) of the state of Sabah, consisting of 100,000 indigenous Christians in over 500 churches in the state. Sidang Injil Borneo means “Gospel Assembly Borneo” in the Malaysian language. Malaysia officially espouses the “M” religion, and actively attempts to convert indigenous believers in Sabah away from Christianity to the official religion.

At the Evangelistic Healing Service on the first day following the morning and afternoon Basic Training, we witnessed more miraculous healings than we have in recent memory. The Lord used His trained disciples amazingly to heal the infirm. So many people came up to testify that even at the end of the meeting we had between 15 and 20 people still on the stage waiting their turn to testify, but we could not get their testimonies because we had simply run out of time. As far as I can recall, this has never happened before in our meetings. 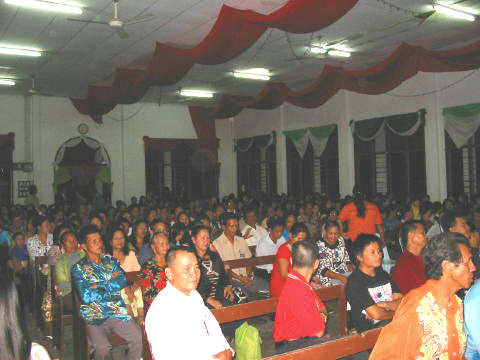 Above & below: the Evangelistic Healing Service 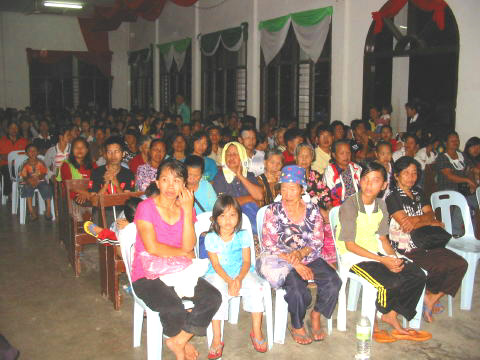 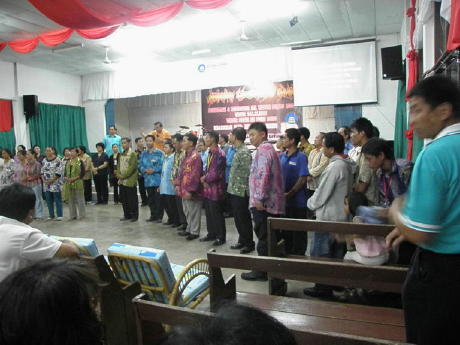 Trained disciples prepare to heal the infirm to confirm the truth of the gospel: Jesus Christ has authority to forgive sin and to save from hell 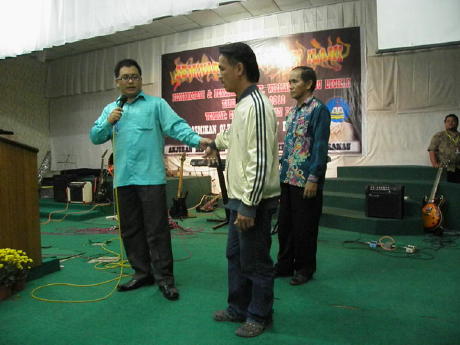 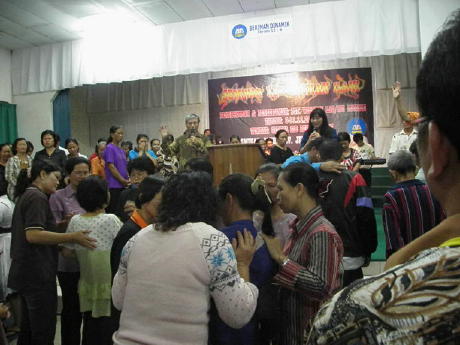 As trained disciples minister to the infirm in the foreground, those people already healed gather on the stage (top of photo) to testify one by one 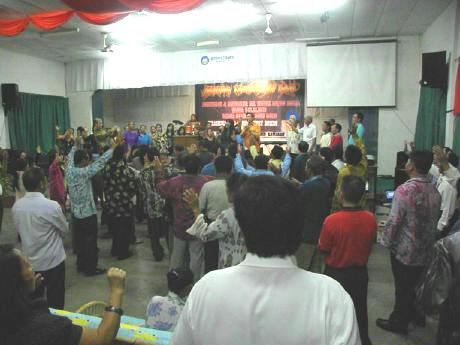 Sinners came forward to accept Christ as a result of the word of God and the miracles.

The second and final day of the Basic Training

The President of SIB for the state of Sabah came all the way from the city of Kota Kinabalu to attend the evangelistic service on the second evening and to see for himself. We presented the gospel and the word of God clearly in the Indonesian language which was understandable to the people. The trained disciples then came forward to heal the sick as proof that the message was true. Just as the evening before, many people came up to the stage to testify that the Lord had healed them. Among the testimonies was recovery of sight. We could not understand some of the testimonies because they were given in a local dialect. There was much excitement in the air. After the testimonies, people repented of their fruitlessness and complacency and returned to the Lord to serve Him wholeheartedly.

The significance of the Training event

The next evening we had dinner with the SIB Sabah President where he shared what he felt was the true impact of the meeting. In the states of Sabah and Sarawak in East Malaysia which are home to the indigenous people of Malaysia, the authorities are actively pursuing a program to lure Christians away from the faith and to convert them to the dominant religion of Malaysia. According to statistics the indigenous people groups constitute 80% of the entire Christian population of the country of Malaysia. The remaining 20% consists mostly of ethnic Chinese and Indian Christians. 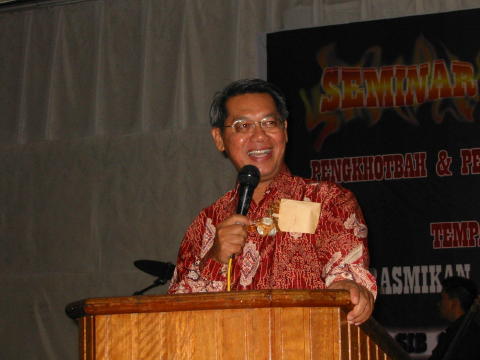 The President of SIB Sabah

Many of not most of the indigenous Christians are found in the SIB Church of Sabah and Sarawak in East Malaysia. In its attempt to minimize Christianity, the authorities are now targeting these indigenous Christians. Generations ago, SIB experienced revival and growth. But the last two generations have not met God in that way with the result that many indigenous Christians are either nominal or weak in their faith. Because of that they have become relatively easy targets for the authorities. The result is that the Christian population of Sabah has been steadily shrinking as a percentage of the total population of the state. It is now down to 28%. The authorities typically use very tempting material incentives to lure weak and complacent Christians away from the Lord Jesus Christ.

This dire threat to the faith was made clear to us over dinner with the President of SIB Sabah on the next day. However, he had just witnessed something at the Evangelistic Healing Service which gave him great hope. He had heard many testimonies from people who had been healed when the trained local leaders and believers laid hands on them—and not through the ministry of a superstar, one-man-show evangelist imported from the outside. He had seen the excitement in the crowd of about six hundred Christians as the people testified. And the amazingly large offering received that evening for the work of the gospel—over 4,000 Malaysian Ringgits—was itself unheard of for Ranau and offered further evidence that the Lord had revived his people.

One of the leaders present from SIB Headquarters in Kota Kinabalu—who had been trained under Morris Cerullo—called it “revival.”

What this means in the long run

The SIB President sees that by repeating Elijah Challenge Events in his other districts in the state of Sabah, the Christians will be revived and no longer lured away by the authorities to the other faith. When lukewarm believers witness miracles of healing done in the name of Jesus, they will have no more doubt that He is the only way to God (John 14:6 & 11). Their faith will be encouraged and strengthened.

Initially, we had thought that the Elijah Challenge Training would be used to equip SIB to win animistic villages in the interior to Christ. But the SIB Sabah President told us that these villages comprise only about 2% – 3% of the population of Sabah. The far greater priority is to prepare the believers for the great and terrible Day of the Lord—the Second Coming of Jesus Christ—by bringing them back to the Lord. This can be done by preaching repentance to them in the power of miraculous signs as did Elijah on Mt. Carmel to bring the Israelites back to the Lord.

Thus the primary purpose of the Elijah Challenge Training in SIB Sabah will be to equip SIB leaders to proclaim repentance to God’s people in the spirit and power of Elijah—in order to prepare them for the Second Coming of the Lord Jesus Christ.

But neither will the trained SIB leaders in Ranau neglect the unreached animistic villages. They are planning to reach them for the gospel by obeying the Lord’s commands: “Heal the sick and tell them, ‘the kingdom of God is near you.'” (Luke 10:9) 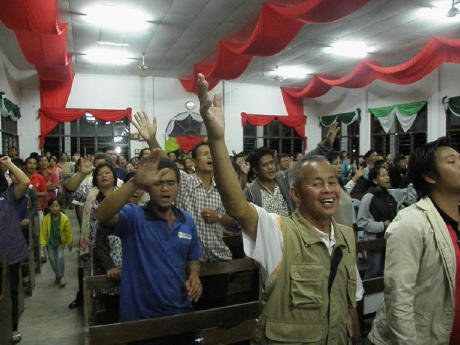