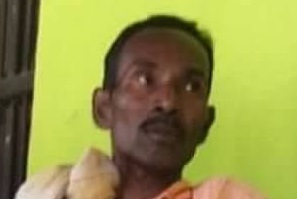 “Thank you for your intercessory and financial support. The Lord has been so gracious to use our harvest workers very fruitfully.”
.

“Raghunath (above & below) served as a priest for a group known as “Alekhas Mahima”. But for three months he was tormented by a demon spirit. Every night he could feel some kind of force entering his stomach bringing severe discomfort. He consulted with a doctor who performed tests on him, but all came back negative. So he sought help from other sources, but nothing could relieve him of the pain and suffering. Finally he looked up our Elijah Challenge workers. They came and ministered to Raghunath in the name of the Lord Jesus, and the suffering was finally over. The grateful priest accepted Jesus Christ.”
. “For two months a young man named Rabi (below) had a problem with his right leg causing him problems when trying to walk. He couldn’t understand why. Doctors prescribed medicine for him, but the problem persisted. Even after spending a tidy sum of money for treatment here and there, his right leg wasn’t healed. Then our Elijah Challenge workers ministered to him, and the Lord healed him. He believed and accepted Jesus Christ.”
. “Phakir Behera (below) had both high blood pressure and high blood sugar over the past five years. The two problems resulted in severe pain in his back and legs. Sometimes he would experience difficulty sitting and walking. Then our workers ministered to him over a period of a few evenings. The Lord totally healed Phakir, and the terrible pain disappeared. After that he accepted Jesus.”
. “For a year and a half, Subal (below) suffered from arthritis and so had a problem walking. Then after hearing about one of our house churches, he decided to attend a Sunday service. There the Lord miraculously healed him. Subal believed and accepted Jesus Christ.”
. “Hailing from a village called Baljori, Sarita (below) had hemorrhoids which caused unbearable pain. She tried various medications, but none were effective in healing the hemorrhoids. Then our Elijah Challenge workers ministered to her in the name of Jesus. She was miraculously healed from the pain and the hemorrhoids, and then accepted Jesus as Lord and personal Savior. Immediately after that she was persecuted at the hands of her own family. But Sarita stood strong and remained faithful to the Lord.”
.