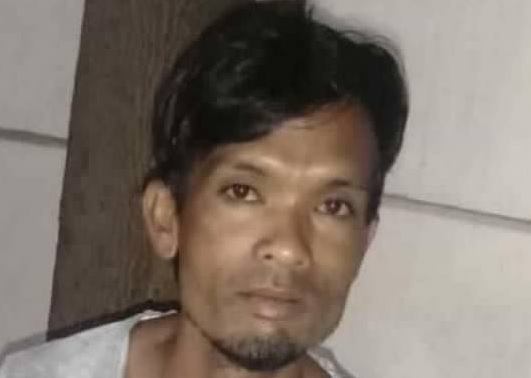 “Praise the Lord for God’s protection upon us and for using us during this very difficult time. The pandemic has now worsened considerably everywhere in India. Even some servants of God were affected and were promoted to the Lord’s presence. Please pray for us.”
.

“For seven years a man named Serso Advang (above and below) had been paralyzed. Much prescription medication didn’t help him. Confined to bed for the seven years, surviving from one day to the next was a struggle for him. Hope for his recovery from the paralysis was non-existent. But then he got connected with our Elijah Challenge workers. After they ministered to him for three days in the wondrous name of Jesus Christ, Serso was miraculously healed by the Lord. He began working again and living a normal life. He has accepted Jesus Christ as his only Lord and Savior.”
. “For twelve years Prahalad (below) had been deaf. A doctor treated him and gave him medicine which he took for a few months. But his hearing was not restored. Then our Elijah Challenge workers ministered to him with power and authority in Jesus’ name. His hearing was miraculously restored, and Prahalad put his faith in Jesus, receiving him as Lord and Savior.”
. “Gore Lal (below) had been tormented by a demon spirit for four years. Earlier a demonic attack had left his eldest son dead, and Gore was in the process of grieving over his son. But after a few months the demon attacked Gore himself, leaving him mentally unstable. He spent a lot of money being treated by various sorcerers from different places, but was not set free. Then somehow he heard about our ministry. He met with our Elijah Challenge workers and shared with them what he was going through. Our workers then rebuked the demon in the name of Jesus Christ, and it left him. Gore accepted Jesus.”
. “For a long time Amima (below) had pain in her womb. Her hand also hurt constantly. She had taken a lot of medicine, but the pain persisted. When our workers ministered to her, the pain vanished and Amima was healed. She accepted Jesus as Lord and Savior.”
. “Kiran (below), a young man who worked as a laborer in Chennai had been afflicted by hemorrhoids. The doctor prescribed medicine for him, but his condition become so serious that he was forced to return to his home village of Urladani in Orissa. There he met with one of our Elijah Challenge workers who ministered to him in Jesus’ name. Kiran was miraculously healed of the hemorrhoids, and accepted Christ.”
.