Hindu woman hospitalized for severe kidney failure had lost consciousness with no hope of recovery. BUT Jesus…! 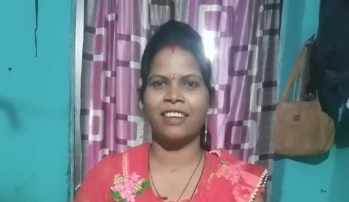 “Greetings to you in Jesus’ precious name! Thank you so much for your intercessory and financial support for reaching the unreached here in India. We are seeing outstanding reports from our harvest workers.”
.

“A woman named Gita (above & below) had been hospitalized for two days due to extremely severe kidney failure. She had already lapsed into unconsciousness, leaving her family with no hope that she would survive. Our Elijah Challenge workers were then called to pray for her. They went to the hospital where they ministered to Gita with supernatural authority and power in the unmatched name of the Messiah Jesus. She then returned to consciousness with her kidneys functioning normally as confirmed by her doctor. Along with her husband Gita accepted Jesus as her only Lord and Savior.”
.

“For a few weeks Nirmuni Kisan (below) had severe pain in her back, making standing difficult for her. Taking care of daily chores became a major challenge. Pain killers did not help her. Then Nirmuni attended one of our Elijah Challenge house churches where our trained workers ministered to her with authority and power in the wondrous name of Jesus. The pain vanished and she was miraculously healed. Nirmuni and her husband then put their faith in Jesus as Lord and Savior.”
.

“For a long time, a young man named Nirmal Munda (below) had seizures causing him many times to fall wherever he happened to be at the moment. The prescription medication he was taking could not control the seizures and the subsequent falls. Then our Elijah Challenge workers came to minister to him in Jesus’ name. After that the seizures ceased. Nirmal and his family all believed and accepted Jesus Christ.”
.

“An older woman named Premdhani (below) suffered from a stomach infection for a long time. The pain made it very difficult for her even to eat. The village doctor had prescribed medicine for her, but the infection persisted. She was advised to go to the better-equipped district hospital, but due to financial constraints she could not. Then our Elijah Challenge workers ministered to her in the incomparable name of our Messiah Jesus, and Premdhani was miraculously healed from the stomach infection. She then accepted Jesus Christ.”
.

“For weeks Dula (below) would see a demon in her dreams at night. One day finally she become possessed and in front of her bewildered family began doing strange things. They tried to control her, but could not. She ran to the jungle where she stayed, refusing to go home. Her family went to the jungle searching for her, and after a couple of days found her and brought her home. A sorcerer was summoned to deliver her from the demon, but failed. Then our Elijah Challenge workers came and rebuked the demon, commanding it to leave her in the name above all names, Jesus Christ. The demon obeyed and came out of Dula. After that she accepted Jesus as her Lord and Savior.”
.