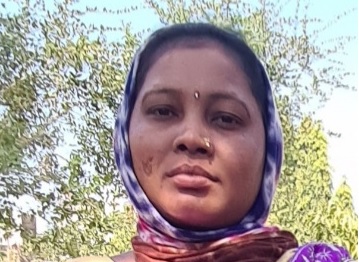 “We are committed to work harder this year. I have challenged our Elijah Challenge workers to accelerate the harvest in their mission field this year. Praise the Lord we are seeing great things taking place. There are many reports which I will be sending you.”
.

“For seven years a young woman named Purmina (below with her husband) had been possessed by a legion of demons. She became a terror to her parents by punching people, picking up things in the house and throwing them around, and running off into the jungle. She and her husband live around 50 kilometers from my home town in Orissa, and belong to a high caste people group called the “Yadav”. To treat Purmina for her condition hundreds of thousands of rupees were spent on various sorcerers in different districts. But after going to all these districts spending so much money but with no change in Purmina, both were discouraged and the end of their rope.

Finally through one of our believers they heard about our Elijah Challenge ministry. On the last Sunday of January 2021 Purnima was brought to us. As soon as we began to minister to her rebuking the demons in Jesus’ name, she began screaming at the top of her lungs. The horrible legion of demons left her and Purnima was set free. Both she and her grateful husband accepted Jesus Christ as their only Lord and Savior. She is now boldly witnessing for the Lord telling others that Jesus is the [Son of the] Only True God. “He delivered me from an abhorrent legion of demons.”
. “For a long time Samari Munda (below) had severe arthritis from her waist down. At times her legs would be bent out of shape. She had taken medicine but the arthritis persisted. Medicine from the village sorcerer did not help. But when our Elijah Challenge workers ministered to her in the name of Jesus Christ, Samari was completely healed. She accepted Jesus.”
. “A young boy named Mahes Majhi (below: before & after) suffered from an unknown condition. For a few days he could neither walk nor eat and remained in bed. His parents took Mahes to the well-equipped hospital in the city where the doctor was unable to diagnose the disease. Nevertheless he was given some medicine and returned home with his parents. Then somehow they heard about our Elijah Challenge ministry, and called our workers. Marvelously, after they ministered to her in Jesus’ name, Mahes was well. He got up of bed and walked around normally. His grateful father and mother accepted Jesus Christ.”
.

“Ajit, a baby boy from the village of Mangaspur, would start crying every night after 11 PM. After a few days of this his concerned parents summoned sorcerers who came and performed mantras for him. But little Ajit continued to cry every night, as before. His parents called our Elijah Challenge workers who came and ministered to Ajit in Jesus’ name. From then onwards the crying ceased…praise the Lord. His thankful parents put their faith in our Lord Jesus Christ. Below is Ajit and his mom.”
. “Fagu Soren (below) worked as a security guard. One day on his way to the office he was attacked by a demon. After that he just didn’t feel well most of the time. Medicine didn’t help at all. But after our Elijah Challenge workers came and ministered to him, he was well. Fagu believed and accepted Jesus Christ.”
.