For many nights a demon would appear before a baby girl terrifying her. The Hindu parents did not know what to do until… 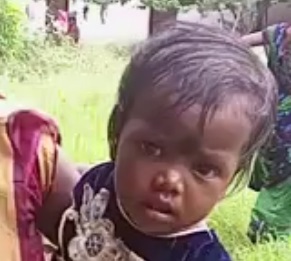 “Thank you so much for your intercessory and financial support for the ministry here in India. We thank and praise our wonderful Lord for marvelous reports from our harvest workers.”
.

“Baby Anuska Munda (above & below with mom) would scream and cry out in the night when a terrifying demon would appear before her. This went on and on for many nights and left her parents totally mystified. But since our Elijah Challenge workers reside quite close to their village, Anuska’s father called them. They came and with the authority of the name of Jesus commanded the demon to leave Anuska. From then on she was set free and able to sleep normally at night. Both her father and mother then believed in Jesus and accepted Him as their only Lord and Savior.”
.

“A woman named Laxmi had severe acidity in her stomach. She had been treated in the hospital and had been given injections. But an infection developed in her arm where she had been given the injections, and her condition worsened day by day. Then our Elijah Challenge workers came and ministered to her with power and authority in the name of our Lord Jesus Christ. Laxmi was then miraculously healed from the acidity and infection. She believed and accepted our Lord Jesus.”
.

“A boy named Jubraj had a stomach infection for six months. The pain was severe and left him in tears. At the hospital he was prescribed a drug for his condition, but the infection prevailed. Then our Elijah Challenge workers came to minister to Jubraj in the wondrous name of Messiah Jesus. He was then miraculously set free and healed from the horrible infection. After that both his father and mother believed in Jesus as their only Lord and Savior.”
.

“Karuna had injured his chest in a fall from his motorcycle a few months back. He had spent a week in the hospital, but after going home he was not well. Pain would hit him while walking, eating, and when he coughed. But after our Elijah Challenge workers came and ministered to him in the name of our Messiah Jesus, the injury to his chest was miraculously healed and the pain vanished. Karuna then accepted Jesus as his only Lord and Savior.”
.

“After she was born, baby Sneha would get sick from time to time. Her parents had consulted with a pediatrician who prescribed medication for her, but there was no change in her condition. Then our Elijah Challenge workers came and ministered to her with supernatural authority and power in the name of our Messiah Jesus. After that baby Sneha had no more spells of the illness. Her father and mother both put their faith in Jesus as their only Lord and Savior.”
.