FIVE sorcerers could not help man and wife tormented by demonic nightmares and sickness. BUT JESUS… 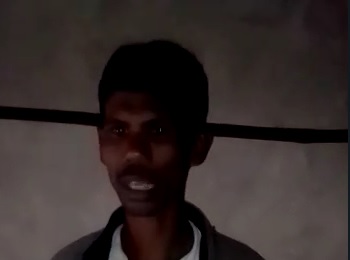 “Thank you so much for your intercessor and financial support for the ministry here in India. Our gracious Lord is so kind to use our harvest workers to produce good fruit among the Hindus.”
.

Selected report among many…

“A man named Ratnakar Beneya (above & below) had been terrified by demonic nightmares. After a few days the nightmares came upon his wife as well. Both of them feared for their lives. Some days later they began to hear strange, frightening sounds emanating from their home. After that they met with five sorcerers, one by one, seeking help from the demonic attacks. But it was to no avail. Both of them then got sick, and medicine was unable to help them. They then went looking for our Elijah Challenge workers and asked them for help. Our workers went to their home and ministered to them with authority in Jesus’ wondrous name. Within a few days, both Ratnakar and his wife were delivered from the demonic nightmares as well as sickness. They decided to believe in Jesus and to receive Him as their one and only Lord and Savior.”
.

“For two months Lalita (below) would just lose consciousness and collapse onto the ground. She did not understand the reason why she would suddenly faint in that way, and consulted a doctor. But the doctor could not diagnose her condition. Then she was admitted to the hospital where she underwent treatment. But a few days after being discharged and returning home, the fainting spells recurred. Then her husband contacted our Elijah Challenge workers. Lalita was taken to one of our Elijah Challenge house churches where our workers ministered to her with supernatural authority in the name of Jesus Christ. She was miraculously healed and she no longer suffered from loss of consciousness. After that Lalita and her husband accepted Jesus as their one and only Messiah.”
.

“A man named Raghu Nath (below) had tuberculosis. Since he was also addicted to alcohol, his condition was severe. His local hospital referred him to the more advanced district hospital for treatment of his condition. After being given medication, he returned home. But day by day Raghu’s condition deteriorated and he was very weak. His children then contacted our Elijah Challenge workers who came and ministered to Raghu with supernatural authority and power in the wondrous name of our Messiah Jesus. Within five days Raghu was completely well. He and his family then accepted Jesus Christ.”
.

“For a long time a woman named Sabita Bag (below) had a migraine causing severe pain. Despite being under treatment by a doctor for quite a while, the pain persisted. Then our Elijah Challenge workers ministered to her with power and authority in Jesus’ name. Sabita’s stubborn migraine vanished. After that she believed in Jesus and accepted him as her personal Lord and Savior.”
.

“Alibha Rout (below) suffered from a fever for approximately two weeks. Her temperature would simply not go down. Instead of going to the hospital, she went to see a lady sorcerer to perform mantras over her. But the fever persisted. By that time COVID-19 was going around again and people were afraid to go see doctors. So her husband went to the doctor on her behalf and was given prescription medication for her to take. Buy after two days the fever did not subside. Then our Elijah Challenge workers came and ministered to her in the marvelous name of our Messiah Jesus. Alibha was instantly healed and the fever vanished. Both she and her husband then put their faith in Jesus as their only Lord and Savior.”
.