Brother Emmanuel was trained at The Elijah Challenge Seminar in November 2004 in Nigeria. He was taught how to heal the sick as Jesus did to prove to the lost that He is the only way to the Father.

“You have imparted much into me, and countless other [servants of the Lord] have benefited with an outstanding healing testimony in their ministries. The same thing you taught me I have communicated to them…It is only God who will reward you…”

“The Oshiri community is sold out to two powerful deities who they claimed is their god. These deities claimed that they were protecting the land from invaders, and they manifested themselves in December with some spectacular signs that the community must take notice of. Dogs are the major animals that are sacrificed to this satanic deity.

This community was loaded with stubbornness, deafness and epilepsy.

On the 8th of December was the first day of the crusade, there were about six thousand people in attendance at the market square named Eke Market. After praise and worship, I mounted the stage. I told them I am not a miracle worker, but I have come to introduce the miracle worker who is Jesus Christ, the greatest of all gods. 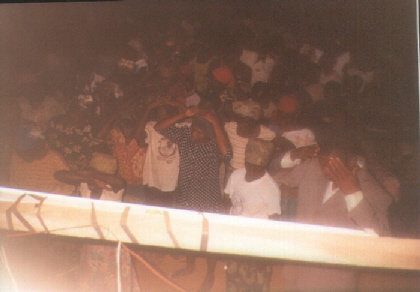 I preached on the topic THE HEALING JESUS and I ministered to the sick en masse, taking authority over demons of infirmity, sickness and diseases, and mentioning names of various sicknesses commanding them to go in the name of Jesus.

I called out for those who were actually and completely healed, not those that were getting healed. Over 50 people came out to testify of the Lord’s mercy.

About 5 people testified that their short legs grew out as we tested them on the stage before everybody. Some testified of growths on their neck, stomach, and hand dissolving. Some who could not stand erect due to spinal cord injury could stand perfectly as we tested them. People testified of epileptic seizures healed. I asked them how did they know. They said they saw personalities coming out of their bodies forcefully as their bodies experienced electrical current. Still on the last day of the programme I still called them out to make sure if they are actually healed. I was told that the attacks never came back neither the symptoms; they said they usually have attack almost three times daily but after the first day of the programme, no signs of that attack again.

When the people were testifying some of the others were mocking me saying it was pre-arranged or manipulation.

On the second day which was Friday when I came up on stage I told them I would prove to them that it was not manipulation or a set-up. I said, “bring me all the deaf and the dumb, I want to minister to them.” They brought seven deaf and dumb people all of whom were known to the entire community. When they came forward the crowd shouted, “take them up to the stage so that everyone will see God healing them.” I told the ushers to bring them on the stage.

My FAITH DID NOT SHAKE AT ALL.

I laid my hand on the first one and commanded the deaf and dumb spirit to leave; it left in a second. We tested him and he repeated every word perfectly. The crowd shouted praising God. After much praise and celebration, we discovered that the remaining six could hear without being ministered to as every one of them were tested. From that moment all mocking stopped. Every person in the crusade believed and rejoiced in God.

I then preached on breaking the power of witchcraft. After the message almost the entire community gave their life to Jesus. Many were weeping asking God for mercy as I led them to receive Jesus as their Lord and personal Saviour.

I minister to the sick (en mass) the testimonies were outstanding as partial blind eyes were perfectly healed. People brought to the crusade that could not walk, could walk without walking aids and many others testimony were given. 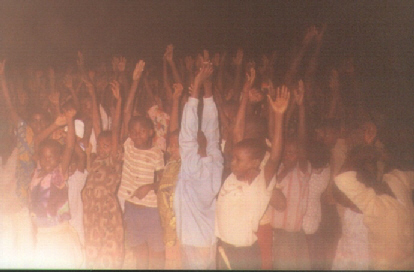 On the third day neighbouring community heard that JESUS is in Oshiri doing wonders and miracles, they came in mass we recorded about 10,000 people in attendance. The whole crowd were committed to everything we are doing because they were convinced. Large number of people were healed on the last day, we couldn’t collect all the testimonies. I was called yesterday on the phone to be informed that miracles of healings are still taking place on their own even without anybody ministering to them and that every home has a spectacular miracle which they cannot deny.

I was able to train over fifty ministers/believers in a Healing Seminar for two days in the morning, we did practical only in the day as some sick people were brought. They had no opportunity to minister in the night crusade because of the challenges we had with mockery before they were convinced.

Thank you, for training me to train others.” 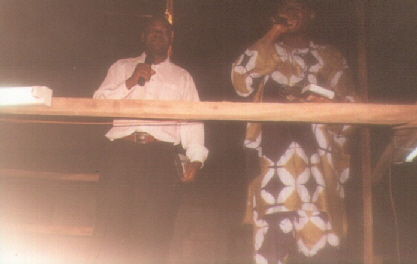 This report kindly sent to us by Evangelist Emmanuel, who was trained in the healing ministry at The Elijah Challenge Seminar in Enugu in November 2004

Udu is one of the most popular areas in the Warri region. In the Udu area, there is a river called the Udu River. Many religious cults go there to offer sacrifices to marine spirits residing in the river, especially “white garment churches” which are false churches. Many people believe that after such sacrifices—eggs, garden eggs, goats, etc.—that their needs are met.

But after interviewing most of the people in that community, we discovered that the solution offered by these water spirits is temporary and to their detriment afflicts them with an even worse situation later. As I’ve always said, when the devil gives a man a shoe, he will take his leg; when he gives a man a cap, he will take his head. With the devil there’s no free gift; anything he gives is in exchange for the person’s soul.

The people in that community don’t like going to church; neither do they attend crusades. Nevertheless, I decided to have the crusade because I love such communities that are stubborn to the gospel—knowing that then the power of God can break every community stronghold and cause people to repent in their numbers.

On the first day of the crusade, I preached on the topic “THE CROSS” after which I gave an altar call. Many of the sick responded. After ministering healing to them in the name of Jesus, about seven people gave testimony of their instant miraculous healing. Among the healings were:

1. A woman testified that the lump in her breast disappeared.
2. A woman brought in paralyzed could walk.
3. A man who broke his neck in an accident who was having consistent pain testified that he felt something like electric current on his neck, and suddenly the pain vanished.
4. A young man was brought who, when he stood up could bend backwards with his head touching the ground because of a spinal cord injury—this defied medical treatment. God touched his spinal cord. He was perfectly healed and he could stand alone without bending. This testimony caused a Holy Ghost roar in the crowd. 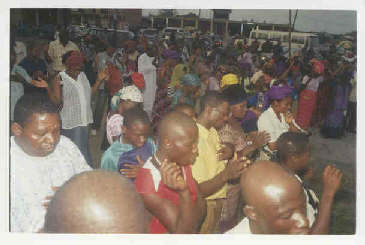 These are just a few on the first day, but on the other days, many with cancers were healed and many with marine spirits were delivered by the blood of the Lamb. When altar calls were made, many men, women, boys & girls came out to give their life to Jesus.

On the third day of the crusade, people said when I stretched forth my hand to pray they saw fire coming out of my hand. After the healing crusade we were told that people started to repent and attend church in that community.

The Benin Healing Seminar was explosive, as many pastors and church workers and believers attended. The attendees were about one hundred and fifty people. The seminar was just for two days as we watched the teaching you gave at the Enugu Healing Seminar on video and I explained some few things and answered their questions. We used deaf people, arthritis patients and people suffering from neck pains as demonstrations. As we watched God heal them instantly, the faith of the believers was stirred up, and I told them that God will begin to use them also. These I called out to do the healing. I told them to go in that anointing to depopulate hell and populate heaven, but the glory should be given to God.

The seminar was held in Accra Guest House auditorium. Only about fifty people were in attendance. I taught them what you taught me. I showed them your teaching video which I recorded at the Enugu Healing Seminar. We did demonstrations and many diseases and sickness were healed. 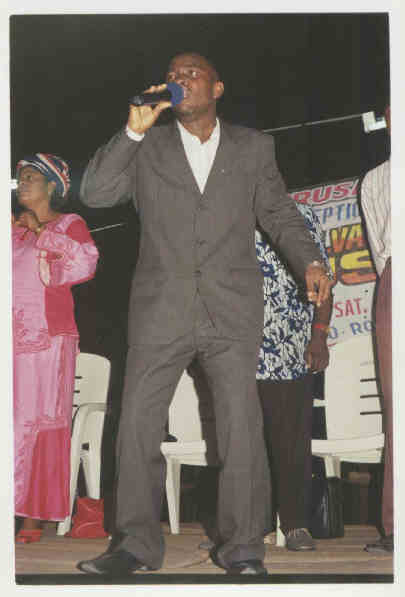