Elderly woman had bloody diarrhea, was weak & had stopped eating. But after Jesus healed her, her family believed. 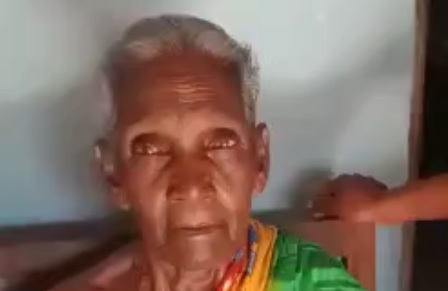 “Greetings to you in Jesus’ precious name. Thank you so much for your regular intercessory and financial support for the ministry here in India. We are so very thankful to the Lord for the Acts-like reports we are receiving regularly from our harvest workers.”
.

“An elderly woman named Sachita Kerketta (above & below) was in very serious condition with bloody diarrhea. Her family had taken her to a doctor who prescribed medication for her from the hospital, and she felt better. But within a few days she had a relapse and the bloody diarrhea returned. Sachita became very weak and for a few days stopped eating. Then her daughter came to hear about our Elijah Challenge ministry. She called our Elijah Challenge workers to their home to minister to her mother. Without delay they went and ministered to her in Jesus’ name. Sachita’s bloody diarrhea miraculously ceased. The entire family accepted Jesus Christ.”
.

“For around twenty days, a young woman named Arati had a mental disorder. She would go here and there without informing her family and would have no recollection. Finally her family had Arati admitted to a hospital. After treatment there for a few days, there was no change in her mental condition. Then our Elijah Challenge workers came to pray and to minister to her in the wondrous name of our Lord Jesus Christ. Arati’s mind was miraculously restored. After that, along with her family members, Arati accepted Jesus Christ as her only Lord and Savior.”
.

“Gobinda Behera had a horrible skin disease all over his body. For a long time he was treated by a doctor with medication at considerable expense, but to no avail. He then spent more money consulting with other doctors, but they also failed to help him. At last he met with our Elijah Challenge workers and asked them for help. They prayed and ministered to him in the name of Jesus Christ, and Gobinda experienced a miracle as his skin cleared up. He believed and accepted Jesus Christ.”
.

“For the past ten days, Soni Munda’s baby boy had a high temperature which despite prescription medication would simply not go down. Soni then brought him to one of our house churches where our Elijah Challenge workers ministered to him in Jesus’ wonderful name. His fever vanished. Soni then accepted Jesus Christ as her Lord and Savior.”
.

“A woman named Vilina Tappo had gastritis and high blood pressure, and for a long time had been receiving medical care from a nearby doctor. But there was no improvement in her condition. Then Vilina came and attended one of our house church meetings. There our trained harvest workers prayed and ministered to her in the marvelous name of our Messiah Jesus. Vilina was then miraculously healed. She then believed in our Lord Jesus and accepted Him as the Christ.”
.