INDIA: Village chief with family comes to event to watch for fake healings when his own daughter’s breast cyst disappears; over 800 accept Christ 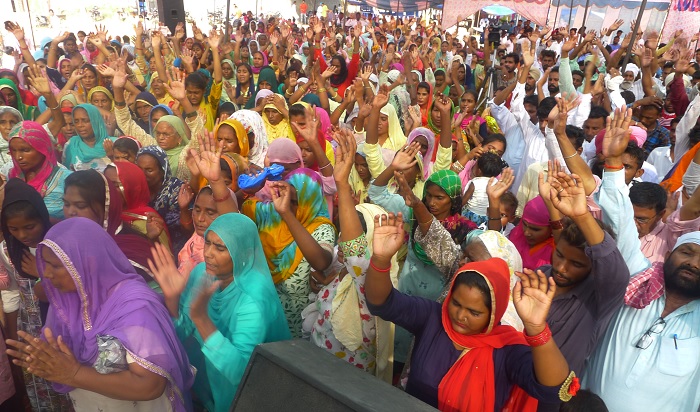 “Over 800 people raised their hands to accept Christ in a first-ever gospel event in Disst Mansa on the border between the states of Haryana and Punjab. In spite of no police protection, the event went smoothly.

The village chief came to the meeting with his family to see if any conversions or fake healings were taking place. To his surprise, his own daughter—who was sitting in the front and who had a cyst in her breast—was instantly healed when she asked Jesus to come into her heart. She went to her father and testified that the cyst had vanished. Doctors had advised an operation to remove her cyst.

A young lady crying in pain due to severe swelling in her liver was healed.

Many with unclean spirits were set free and healed.

A man from a Sikh family who gave his life to the Lord was healed from a severe breathing problem.

Seven pastors who helped in organizing the event had 40-50 new believers added to their churches afterwards.

Kindly pray for new doors to be opened in Haryana.”

Basti, a Hindu woman, was blind in one eye and partially blind in the other. Then she attended one o...
Wonderful harvests of souls in North India accompanied by miraculous signs confirming the gospel
Man in critical condition with diabetes & high blood pressure taken to Hindu temple, to sorcerer, th...
Puja had UNDIAGNOSABLE pain in her legs; couldn't walk. But Jesus healed her & she believed.