Man in critical condition with diabetes & high blood pressure taken to Hindu temple, to sorcerer, then to hospital… 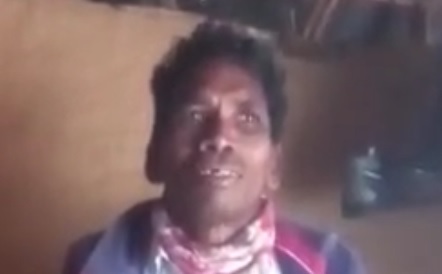 “Thank you so much for your intercessory and financial support for the extension of His kingdom in India. Glory to God for His blessing on our ministry and for using our harvest workers in various places not yet reached with the gospel.”
.

“Sana Khila (above & below) had both diabetes and high blood pressure leaving him in critical condition. His family had taken him to the temple seeking help from their Hindu gods, but to no avail. After that they took him to the home of a sorcerer where he stayed for a few days while being treated. But the sorcerer was helpless to help Sana. With his condition now getting critical, his family finally took him to the hospital. But the doctor there, seeing his appalling condition, would not admit him. By that time his family had lost hope even that he could survive, and so took Sana home. Somehow they were connected with our trained Elijah Challenge workers. When our workers came and ministered to Sana in the name of Jesus Christ, he was wondrously and miraculously healed. After the gospel was shared with them, Sana and his family put their faith in Messiah Jesus.”
.

“A man named Purusotam Rana had back pain for two weeks rendering him unable to bend over. Earlier he had been able to walk and to sit, but now with the back pain he was unable to walk any distance. And he sat down, a burning sensation would envelope his legs. He also had a problem with his blood circulation. Then he heard about our Elijah Challenge house church. He went and received prayer and ministry in Jesus’ name from our trained Elijah Challenge workers. The back pain and burning in his legs disappeared. After that Purusotam accepted our Lord Jesus as His Lord and Savior.”
.

“For a long time a woman named Puchu had a migraine headache. She had tried prescription medicine with no result, and was now desperate to get well. She then came to one of our house churches with great expectation. There our trained workers ministered to her in the mighty name of Jesus, and her migraine vanished. Puchu then put her faith in Jesus as her Lord and Savior.”
.

“Pramila had been demon-possessed for a long time. From time to time the demon would torment her. Her husband brought a sorcerer who performed mantras for her, but the demon paid no attention. Instead it would attack her frequently. Finally her husband brought Pramila to one of our Elijah Challenge house churches. There our trained workers ministered to her, and the Lord Jesus completely delivered her. Both Pramila and her husband accepted Jesus Christ.” (The video below shows the demon being cast out from Pramila.)
.

“A few months back Sambru had hurt himself falling from a tree. He could no longer stand up straight nor walk normally even after being treated by a doctor with medication. But after our Elijah Challenge workers came and ministered to him in the name of Jesus Christ, he was miraculously healed and able to stand up straight and walk properly again. Sambru then accepted Jesus Christ.”
.

Since 2018 our trained workers in and around Odisha have planted 1,205 new house churches with over 48,000 new believers, reaching 38 previously unreached people groups, including high caste Hindu groups which are among the most resistant and difficult to reach. This is in the region of Orissa (Odisha) State alone, considered the poorest state in India where Fundamentalist Hinduism reigns. Water baptism is illegal. Up in North India our trained harvest workers are seeing similar harvests among the Hindus and Sikhs.

Basti, a Hindu woman, was blind in one eye and partially blind in the other. Then she attended one o...
Wonderful harvests of souls in North India accompanied by miraculous signs confirming the gospel
Puja had UNDIAGNOSABLE pain in her legs; couldn't walk. But Jesus healed her & she believed.
INDIA: Village chief with family comes to event to watch for fake healings when his own daughter’s b...