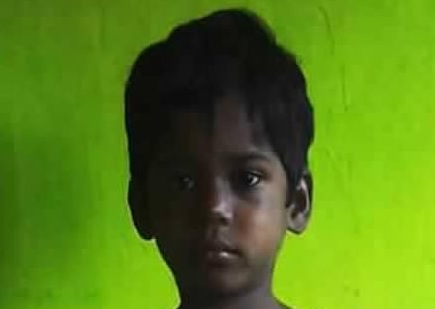 “Thank you so much for your intercessory and financial support for the extension of His kingdom here in India. Despite the current second wave of the pandemic now more deadly than the first, we are seeing a harvest of precious souls for Jesus Christ.”
.

“Four-year-old Tuni (above & below) had been unable to walk since birth, causing much anguish for her parents. They had spent a lot of money taking their little girl to various doctors and hospitals for treatment, but Tuni simply could not walk. Then they heard about our Elijah Challenge workers and called them. They went and ministered to her in the potent name of Jesus Christ. On the second day little Tuni began walking for the very first time in her life. The indeed grateful family believed and accepted Jesus Christ as only Lord and Savior.”
. “Young Bhadra Majhi (below) suffered from seizures for a long time. He would just suddenly lose consciousness wherever he happened to be. Like the boy in Mark 9:22, Bhadra would on occasions even be thrown into water. The attacks were especially bad during periods of a full moon. In the beginning he took drugs prescribed by a specialist in allopathic medicine, but the seizures persisted. He then tried ayurvedic medicine, but to no avail. When our Elijah Challenge workers ministered to him with supernatural authority in the mighty name of Jesus, the seizures totally ceased. After that Bhadra’s entire family came to Christ.”
. “For four months Surendri Harijan (below) had an issue of blood like the woman described in Mark 5.  A lot of prescription medication from different doctors and hospitals did not stop the bleeding and continuous suffering. Finally, abiding by some ritual her desperate parents took the measure of forbidding her from going into her room, and even told her to stay outside the house. Then the family connected with our Elijah Challenge workers who ministered to Surendri in Jesus’ wondrous name. Her bleeding stopped and she was miraculously healed. Along with her thankful family Surendri put her faith in Jesus as her only Lord and Savior.”
. “Tapan (below), just six years of age, had jaundice. His parents had taken him to a local hospital, but since his condition was very serious they were advised to take their son to the city hospital for better treatment. Living in poverty, they couldn’t afford such treatment. But, praise God, when our workers ministered to the little boy he was miraculously healed from the disease. His amazed parents accepted Jesus.”
. “A young man named Bipula (below) had sickle cell anemia. Over a period of seven years he needed blood transfusions. Prescription medication as well as rituals performed by sorcerers did not help at all. But a few kilometers from his village was an Elijah Challenge house church. When he attended the meeting, he was miraculously healed. Bipula accepted Jesus.”
.