At the first session of The Elijah Challenge Training at the Central Presbyterian Church of Londrina, over a thousand believers gathered. It’s evident that the Lord has put a great spiritual hunger in His people in Brazil. The primary purpose of the Training was to train them how to obey Jesus’ commands to his disciples when he sent them out to “heal the sick and tell them, ‘the kingdom of God is near you'” (Luke 10:9).

At the end of the session we did a demonstration of healing according to the pattern of how Jesus Himself ministered to the infirm. Following John 14:12, we would minister in the same way that Jesus did. One of the pastors on the staff had a heart condition resulting in an irregular heartbeat. Two brothers, including Senior Pastor Osni Ferreira, came forward to minister to him. As Brother Osni laid hands on his chest he could physically feel the man’s highly irregular heartbeat. They rebuked the disease and issued authoritative commands to the heart to be healed in Jesus’ name. After being ministered to twice in this way, the man’s heart rate appeared to have returned to normal. I then told him to run to the back of the big auditorium and to come back to us. He did. After returning he reported that he felt fine. Normally he would have been unable to run in that way with his heart condition.

After that many others with heart conditions in the crowd come forward to be healed. Afterwards we received dramatic testimonies from some of them about what the Lord had done as believers laid hands on them in Jesus’ name. Two days later one of those healed gave the following testimony.

Dr. Celia Itikawa is a physician of Japanese descent who had practiced pediatrics and family medicine for 30 years, but suffered from a serious heart condition. On Thursday evening when the disciples ministered to people with heart conditions she felt God’s healing touch. The next day she went to be examined by her doctor. She went to the training session on Saturday and testified from the stage waving in her hand a big white envelope. It had contained the results of the examination and medical documentation showing that her heart was now completely normal. Click here to read her dramatic testimony along with the medical details.

When the disciples ministered to people with hearing problems, some testified that the ringing in their ears which had bothered them for many years had suddenly disappeared. A mother-daughter couple were both healed.

Healing at a distance as Jesus did in Luke 7

During the demonstration of healing at a distance, perhaps twenty disciples came to the front with their mobile phones to minister healing to people they knew who had heart conditions but were not present at the meetings. As they did, the Lord touched nearly all of them. One by one the disciples shared with us what happened. In every case the symptoms of heart disease disappeared. Some were able to do what they could not do before, like climb stairs or run.

“There a centurion’s servant, whom his master valued highly, was sick and about to die. The centurion heard of Jesus and sent some elders of the Jews to him, asking him to come and heal his servant. When they came to Jesus, they pleaded earnestly with him, “This man deserves to have you do this, because he loves our nation and has built our synagogue.” So Jesus went with them. He was not far from the house when the centurion sent friends to say to him: “Lord, don’t trouble yourself, for I do not deserve to have you come under my roof. That is why I did not even consider myself worthy to come to you. But say the word, and my servant will be healed. For I myself am a man under authority, with soldiers under me. I tell this one, ‘Go,’ and he goes; and that one, ‘Come,’ and he comes. I say to my servant, ‘Do this,’ and he does it.” When Jesus heard this, he was amazed at him, and turning to the crowd following him, he said, “I tell you, I have not found such great faith even in Israel.” Then the men who had been sent returned to the house and found the servant well.” (Luke 7:2-10)

During a second demonstration of healing at a distance by the pastors and elders at the front for people with infirmities actually present at the meeting, many—around twenty—were healed by the Lord simultaneously. (In Luke 17 Jesus healed ten lepers simultaneously.) They came up to the stage to testify. Among these twoladies testified through tears that their enlarged thyroids had shrunken. One teenage girl came up to testify that she had been born with her right hand in a permanent fist and had never been able to open her hand. Through tears she showed us that she could now open and close her right hand normally.

During three Sunday services and an evangelistic healing service Monday evening, we witnessed many, many miraculous healings as trained disciples minister to the infirm. Different kinds of healings took place—from an elderly stroke victim who had been unable to walk without his walker for three years to a woman who started speaking after her speech had been robbed by a stroke to people testifying that they had been healed of severe depression to good eyesight being restored to someone whose vision was poor.

Hearing their testimonies, we noticed that in quite a few cases they described feeling intense heat in the area of their infirmities as they were being healed by the Lord. Some of those who ministered the healing also felt this heat as they laid hands on the infirm.

We believe this phenomena is found in the New Testament in at least two cases where Jesus Christ healed the infirm:

Luke 6:19 and the people all tried to touch him, because power was coming from him and healing them all.

Mark 5:27 When she heard about Jesus, she came up behind him in the crowd and touched his cloak, 28 because she thought, “If I just touch his clothes, I will be healed.” 29 Immediately her bleeding stopped and she felt in her body that she was freed from her suffering. 30 At once Jesus realized that power had gone out from him. He turned around in the crowd and asked, “Who touched my clothes?”

The healing power which came forth from Jesus on these two occasions is dunamis in the Greek. In Mark 5 above Jesus actually felt the power leave him. It is very possible that the woman with the bleeding also felt this power enter her body when she touched Jesus’ clothes.

Jesus now lives in us

Jesus Christ now lives in His disciples through the indwelling Holy Spirit. And when His disciples lay hands on the infirm, His healing power can flow forth to heal the infirm in His name. I believe this is a reasonable explanation for the heat experienced as hands are laid on the infirm in Jesus’ name. We are encouraged that what we are seeing here is consistent with the word of God. It is important to us that the supernatural manifestations we see are consistent with Scripture. Otherwise there is the possibility of deception by the enemy.

As God’s people witness the miracles and hear the word of God, they are coming back to the Lord to prepare themselves for the great and terrible Day of the Lord.

The final evangelistic service on Tuesday evening was broadcast live on local TV. There were about 1,500 people present. The Lord was gracious to enable us to preach gospel of Jesus Christ with power, and followed it up by healing quite a few people through the trained disciples as confirmation of the message. Even medical doctors testified of being healed by the Lord.

At the end of the meeting when Senior Pastor Osni Ferreiro challenged the people to repent and turn to the Lord, souls responded and came forward. It was all broadcast on a local television station. 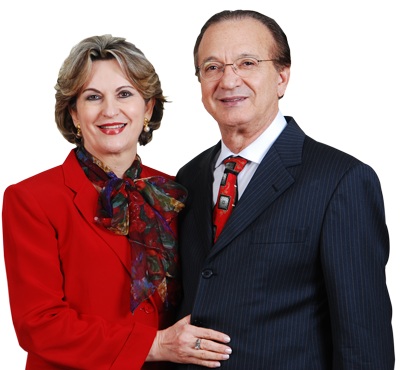