Miracles at the First Independent Presbyterian Church of Londrina

Londrina is a pleasant and modern city of six hundred thousand founded 75 years ago in the state of Paraná by an English company which had been granted permission by Brazil to do business here. (Thus the city was given the name Londrina, which means “little London”.) 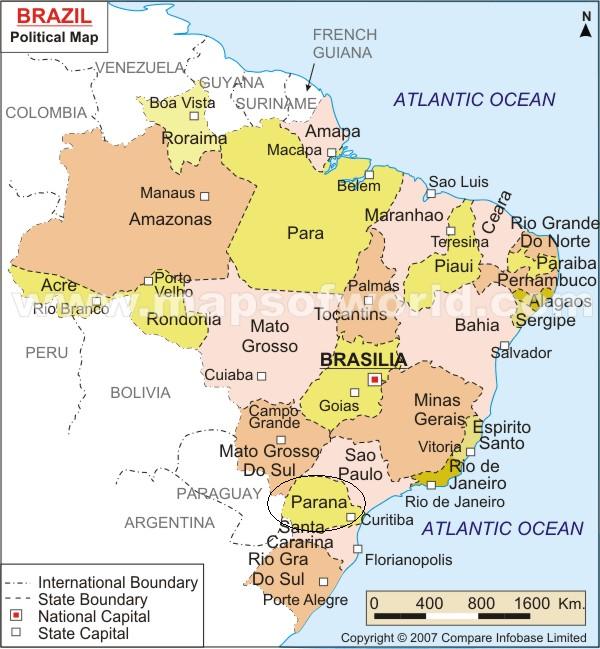 The state of Paraná is in the south of Brazil

At the first session of The Elijah Challenge Training held at the 4,000-member First Independent Presbyterian Church of Londrina, about 750 believers showed up—about twice what had been expected. (See the photo below.) 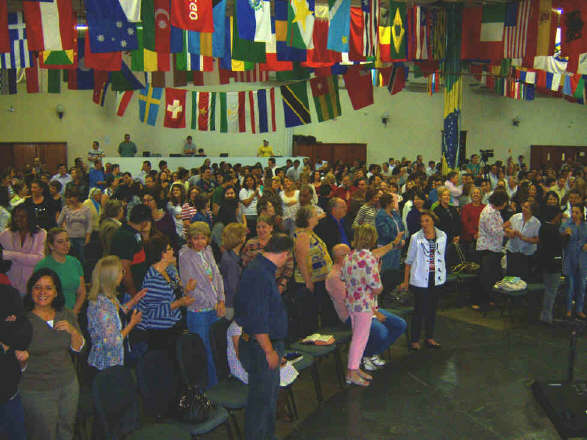 Some were from other churches. Needless to say I was impressed by the turnout. In some churches believers are not terribly interested in learning how to minister and impart blessing to others—let alone something as challenging to tradition and threatening as healing the sick—but rather are more drawn to teaching on how to receive healing or blessing from God.

At the end of the session, I asked if anyone was present who had a heart condition. Two people responded, a woman and a young man. What the Lord did that evening for the young man was especially noteworthy. He came forward with his hand trembling because he had tachycardia, or rapid heartbeat. We asked him about his condition. He explained that if he ran, he would feel sharp pain in his heart. If he picked up something heavy, he would also feel the pain.

Three men came forward to minister healing to the young man. They laid hands on his heart and followed after me as I commanded healing to the heart in the name of Jesus Christ. The young man for some reason fell down as they were laying hands on him. Then they helped him to his feet. I told him to run back and forth at the front of the spacious sanctuary. He took off right in front of the crowd. When he returned to me I asked him how he felt. There was no pain in his heart and he felt fine. Then I looked around for a heavy object for him to lift.

There only convenient objects having weight nearby were the brothers who had just ministered to him. The young man picked up one of them who I would estimate weighed perhaps 140 pounds and held him in both arms for a few seconds like a bridegroom carrying his bride across the threshold. After he set him down, I asked him how he felt. There was no pain, he said with a slight smile.

Praise the Lord for such an encouraging demonstration of His healing power through His disciples before the crowd of 750 believers.

Many were healed of various pains and testified during the time of demonstration. One elderly white-haired man had suffered from a bad fall from a height of four meters (around 9 feet) and had broken various bones. He had come to the meeting in a brace. After being ministered to, he testified that he had been healed and demonstrated it by dancing a couple of steps and then leaping astonishingly high up into the air!

My host pastor brother Rodolfo Montosa encouraged me afterwards by sharing comments he had heard to the effect that [the teaching} was amazing yet so simple. Yes, the word of God should be simple. Jesus was a carpenter and Peter was a fisherman. To my knowledge Paul was the only “theologian” among the early apostles.

Many believers healed at a distance at Saturday morning session

The Lord moved very powerfully in all of the meetings. Many were healed, some dramatically as the trained disciples ministered to them. We have witnessed many miracles over the years, but my heart was touched at the final session on Saturday morning as the Lord healed so many of His people as the pastors and elders ministered to them at a distance from the front of the sanctuary. A long line of people whom the Lord had healed formed on the stage to testify one-by-one how the Lord had graciously touched their physical bodies.

I would sum up this event by quoting the words of one of the men who has been serving as an elder of the church for the past 23 years and a member for over 40 years. A medical doctor, he shared with me that he has seen many good speakers pass through the church over the past 23 years. But after this Training, he said, there will be a definite shift in the direction of the church.

After speaking at the third of four services the following Sunday, I left immediately to preach at the fourth service held at a different location while the leaders took over the service. After I left they decided to minister to the infirm as they had been taught. Among the testimonies of people who were then healed was a man who had pain due to kidney stones. The leaders laid hands on him and the pain disappeared. He then went to the lavatory where he promptly passed the kidney stones!

After my return to the United States, I received reports from that the Lord was continuing to heal the infirm as his trained leaders ministered.

Pastor Rodolfo Montosa reported that many, many miracles took place through his trained leaders after we returned to the United States. In particular he told me about Dr. Oziel, a physician who is one of his elders. This is the doctor who passed out forty copies of our Training Manual after the Lord used him to heal a young girl of severe epilepsy. Dr. Oziel is now very bold in healing the sick in Jesus’ name. Below are some testimonies from him.

There was a woman who used her hands extensively making chocolate in a chocolate factory, but had been struck down by a disease causing various physical symptoms in her body, including pain and immobility in her hands. She had been taking various drugs and medications for the condition, but there was no relief from her suffering. Dr. Oziel’s mother urged him to go see the woman, but he said that it was not necessary—he would simply minister healing to her over the telephone.

Dr. Oziel called her on the telephone. He first shared Psalm 103 with her, telling her that the Lord could heal her disease and more importantly could forgive her sins. Then he prayed to the Lord for her. After prayer, he rebuked the condition and commanded her healing in Jesus’ name. Immediately afterwards while still on the phone the woman was amazed to discover that the symptoms had vanished. She was overwhelmed and wept for joy. Calling on the name of the Lord who had healed her with Dr. Oziel on the line, her sins were forgiven. She became a follower of Jesus Christ.

There was also a man who had suffered from an aneurysm and for several months had been at home in a coma. Dr. Oziel and other trained leaders went to minister to him. Later that week, the man awoke and got up out of bed. His family was overjoyed.

Impact on the city of Maringá

Brother Rodolfo’s mother-in-law Irene also pastors a church in Maringá, a city about an hour away from Londrina. She had brought a group of believers to the Training earlier that month. After that there were many reports of miraculous healings coming from Maringa. There was a man who was being crippled by a condition in which his leg bones were rotating outward in his pelvis. Because of that he was unable to walk normally, and his condition was worsening. Trained believers ministered to him in Jesus’ name, and his leg bones rotated back to their normal position. God healed him.