Qatar is a little peninsular country on the Persian Gulf in between Saudi Arabia and Iran, as you can see in the map of the Middle East below. Qatar is the finger of land inside the black circle. It is rich with oil and natural gas. 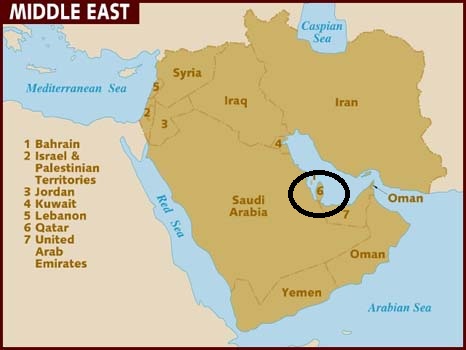 Of the approximately 1.5 million residents of Qatar, only about 400,000 are local. The rest are a mixture of expatriate Indians (800,000 strong), Filipinos, Nepalese, Nigerians, and various other nationalities including Americans. The USA has an airbase here.

Within the Nigerian community here consisting of nearly 5,000 people, the Lord has raised up a Redeemed Christian Church of God (RCCG) known as Rehoboth parish. The members are mostly Nigerian believers. There are thousands of RCCG churches around the world; in the USA alone there are 551.

I found the leaders of RCCG Rehoboth to be filled with the Spirit and committed to the Lord and the gospel. The response to the Basic Training was unusually enthusiastic. From feedback I received it was eye-opening, ministry-transforming and even a “revelation” to them. The Lord was gracious to confirm the teaching by performing various miraculous healings during the meetings as the believers laid hands on one another.

In particular were testimonies of people healed last night during the climactic evangelistic healing service. Instead of preaching “God’s love and blessings” in the usual manner, I preached repentance as did John the Baptist when he appeared two thousand years ago in the spirit and power of Elijah to prepare God’s people for Coming of the Lord. In order to confirm the message of repentance needed to prepare God’s people for the great and terrible Day of the Lord, we asked the Lord to perform miraculous healings on the infirm.

Now within the expatriate community consisting of mostly healthy workers, there are probably few cases of severe illness. But some did come forward for healing last night and were touched powerfully by the Lord. One man had been suffering from severe back pain for 18 long years. He had tried everything to no avail. But as the brothers laid hands on him and rebuked the infirmity, God’s healing power came upon him. Through tears of joy and amazement he shared dramatically that after 18 years the pain was completely gone.

Among the others whom the Lord touched was a woman in her forties. After sisters ministered to her, she stood silently with here eyes brimming with tears. When after the others had testified I asked her to tell the people what the Lord had done for her, she was so overcome by emotion that she stood speechless for several moments as the crowd waited. Finally she blurted out the barely decipherable words, “I cannot say.” The Lord had healed her of something extremely personal. She nodded when I asked her if she had felt the Lord’s healing power in her body.

Through all the testimonies of healing the Lord had said to His people, “Those whom I love I rebuke and discipline. So be earnest and repent.” (Revelation 3:19)

After the final service one of the leaders shared with me how impactful it was that the miraculous healings were used to confirm the message of repentance. In the past he has seen how miraculous healings have been used by unscrupulous ministers to dig into people’s wallets and purses. If an infirm person gave an offering of $500, they would receive a certain level of ministry from the minister. But if they gave $1,000 they would get much more effective “treatment.” The miraculous healings were not used to confirm the truth of the gospel, but to line the pockets of the minister. This gives us some understanding of Jesus’ words:

Matthew 7:21 “Not everyone who says to me, ‘Lord, Lord,’ will enter the kingdom of heaven, but only the one who does the will of my Father who is in heaven. 22 Many will say to me on that day, ‘Lord, Lord, did we not prophesy in your name and in your name drive out demons and in your name perform many miracles?’ 23 Then I will tell them plainly, ‘I never knew you. Away from me, you evildoers!’

The pastor of RCCG Rehoboth is now determined to make this kind of ministry a vital part of the life of the congregation. Please pray that the Lord will grant him the strength and wisdom to carry out this intention for the purpose of reaching out to the big expatriate community here with the gospel of Jesus Christ.

A testimony received the following month

A disciple who attended the Training wrote us:

“I am Adebola O., a disciple of the Lord at Redeemed Christian Church of God in Doha. The healing training was powerful and it changed my life since then. My eyes would pain me as though salt/pepper was in my eyes any time I woke up in the morning and during the day sometimes. When it gets bad i will have to rush for water but it will only help for a while. During the healing service I was healed till now i have not experienced it again.

I have now gained so much confidence in Christ. I just heard that someone I know had an accident, I’ll go and lay my hands on him in Jesus’ name. May God bless and enrich you more in Jesus name. Amen.”