Pirapora, Brazil: the LORD vs. the god of the Romaria Festival

Every month or so in the town of Pirapora there is a procession of statues (or idols) of the Virgin Mary through the town attended by thousands of devotees.  This darkness appears to have penetrated every aspect of the town, not only spiritually. There are other serious problems—economic, environmental and the like—which are believed to be a result of the idolatry.

There is environmental pollution the likes of which I had never seen. Along the way to the Assembly of God Church in Pirapora from the Valley of Blessing, we drove along and passed over the river which goes through town of Pirapora. At first glance the river was almost scenic, with what appeared to be foam-like clouds of pristine snow floating everywhere atop the river—like a postcard winter scene. But I was told that the “snow” in the river was actually a result of chemical pollution from the dumping of industrial waste by factories into the river far upstream in the city of Sao Paulo. The unhealthy vapors from the river pollution waft throughout Pirapora, and even outside the church I could smell it. Imagine how it might be affecting the health of the local people. In the United States this would be a headline-making horror story. Such is the pervading darkness in Pirapora. (See the photos of the pollution below.) But the light of the gospel of the glory of God in Jesus Christ began to shine in this town.

We conducted three Elijah Challenge Training sessions. The Lord was gracious to encourage the disciples by healing infirmities through them during the sessions. In the afternoon after lunch the trained disciples went out door-to-door in the community to heal the sick and to tell the people that the kingdom of God was near them according to Luke 10:9. As the disciples went from house to house, the Lord used them powerfully to heal the sick and preach the gospel. Many people were healed in their homes. Later in the evening they gathered back at the Assembly of God Church for a service and God glorified His Son Jesus even more as still more infirm people were healed by the disciples in His name.

“Where darkness pretends to reigns, as it does in Pirapora, the grace and power of God abound all the more.”

On Friday the final day of the event, we had initially been given a special opportunity to proclaim the kingdom of God to the lost. That weekend marked the idolatrous festival to the Virgin Mary known as “Romaria.” Thousands converge in Pirapora to celebrate. Many of them would be staying in or near the public square.

Our intent was to invite the sick among them to our evening open-air meeting in the public square where I would preach the gospel of Jesus Christ. After that I would ask the trained disciples to heal the sick to prove that Jesus Christ has authority to forgive sin and to save from everlasting condemnation in hell, thus granting sinners eternal life.

But Friday evening when we arrived at the public square in downtown Pirapora, we were told that the local authorities had asked us not to hold the gospel meeting outside as planned since the idolatrous Romaria Festival was being celebrated. So instead the team performed a skit outside in the square without any sound amplification to draw people inside to a meeting hall at the square where we could preach the gospel to them. Some people in the crowd outside joined us inside after the skit. Most of the people who went inside for the meeting, however, were believers.

We shared from the Scripture about how God’s people during the time of Elijah had been deceived by Satan into worshiping a false god. Elijah was raised up to bring the Israelites back to God. We all know what happened at Mt. Carmel—Elijah challenged the prophets of Baal to pray asking him to send fire to consume their sacrifice while Elijah would do the same for the LORD. The God who answered with fire would be the true God. While Baal could do nothing, the Lord sent visible fire from heaven. The Israelites fell prostrate and exclaimed, “The LORD—He is God! The LORD—He is God!”

We shared that in the same way, most people in Pirapora although claiming to know God and to be Christians, have been deceived and are no longer worshiping the true God. Instead they are worshiping idols. We shared the gospel of Jesus Christ. Then following the pattern of Elijah we prayed to the LORD asking Him to send the fire of healing to show that He is God and that He is turning the hearts of the people back to Him.

The trained disciples laid hands on those with infirmities in Jesus’ name. The Lord quickly healed many, and they came forward to testify. Several of them testified of their vision being restored. How appropriate that in that town of such spiritual blindness, people’s physical eyesight was restored.

When the people were challenged to repent of idolatry and to come back to the Lord, about ten people came forward. After that there were continuing testimonies of the miracles the Lord had done earlier that afternoon as trained disciples went door-to-door in Pirapora to heal the sick and preach the gospel.

From what I saw during the past few days in Pirapora and what happened on Friday evening at the public square, I conclude that perhaps the most effective method of evangelism in South America is going door-to-door as is being done by Visitation of God. Local authorities can clamp restrictions on preaching the gospel in the open-air as they did to us Friday evening. But is there no law stopping believers from preaching the gospel door-to-door.

The trained local disciples will continue what the Lord has begun in their midst. May the Lord grant them His strength.

The river flowing through town was polluted with chemical waste which had been churned up upstream into a white foam. Below you can see three photos of the town, including the foam which covers a segment of the river. 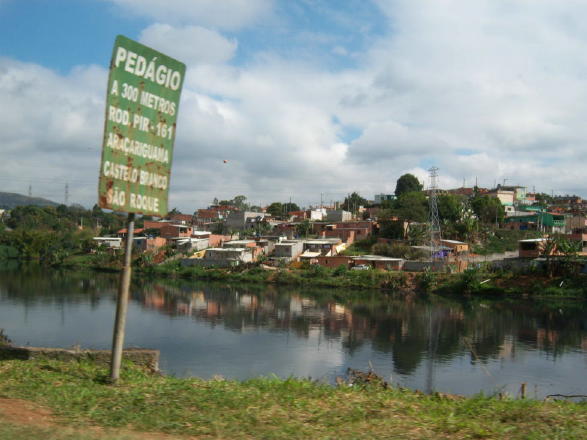 A view of Pirapora and the river 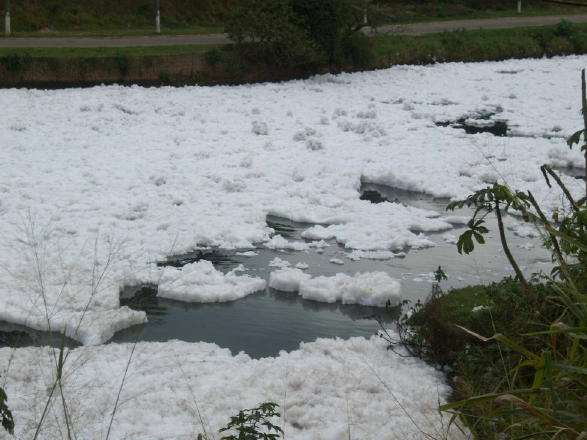 Churned-up chemical waste blanketing a segment of the river

To me this almost beautiful snow-like blanket mirrors the spiritual deception which covered this town in its deep goddess-worship before the Visitation of God. “Even Satan can masquerade as an angel of light.” 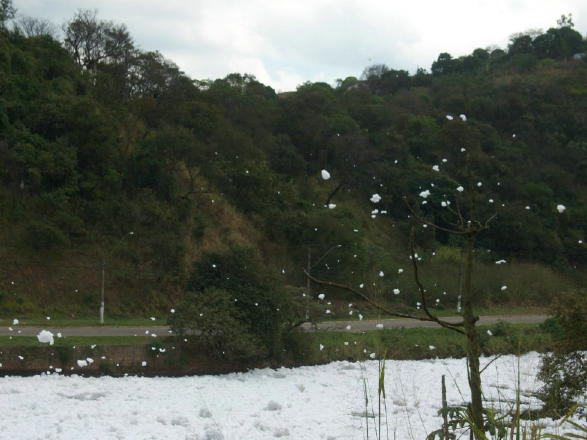 This is not snow falling, but foam from the river being stirred up by wind