The summer weather in Juazeiro do Norte in the spiritually dark Brazilian northeast was absolutely lovely with a strong breeze blowing under a clear sky. For four consecutive mornings I taught The Elijah Challenge Training in the nearby sister town of Barbalha as a part of the Visitation of God. 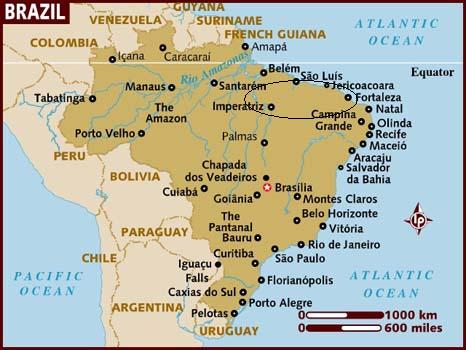 To read the report on the Visitation of God event in Juazeiro do Norte a year earlier, click here.

Barbalha is even less reached than Juazeiro do Norte with only one half of one percent of the residents evangelical believers. Instead of the over fifty participating churches last year in Juazeiro do Norte, there were only twelve local churches joining the Visitation of God event this week in smaller Barbalha, half the size of Juazeiro. In this very idolatrous town only 0.5 percent of the population are evangelical believers. The rest are worshippers of Father Cicero, an excommunicated Catholic priest who also served a mayor of the area less than a century ago. Many miraculous healings were attributed to him. The equivalent of Christmas is celebrated here each year in November by multiplied thousands of pilgrims to observe Father Cicero’s birth. That week, however, the real Savior would be being proclaimed with miraculous healing power from home to home by disciples of Jesus Christ.

At the beginning of the second morning of the training, we received testimonies of what the Lord did through the disciples when they went door to door in the afternoon following the first morning of training. Among other reports, a woman’s blind eye was opened. And a disciple named Rachel shared that she ministered to a man who was deaf. She stood behind him and asked if he could hear her. He shook his head and replied that he couldn’t hear her, and asked why she was talking so loud. She was actually speaking at a normal volume.

I asked the disciples whom the Lord had used to heal the sick yesterday afternoon to raise their hands. Many hands shot up. Below is a photo of some of them. Rachel is in the front row wearing the white blouse.
m 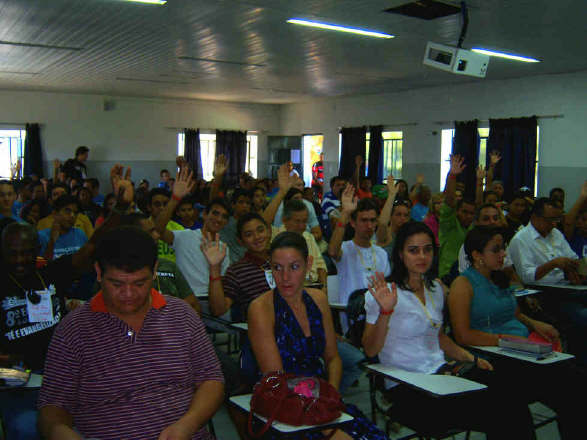 I was told that for the very first time in the history of Barbalha, there is not a single Catholic priest physically present in town at this time. It just “happens” that in the process of rotating priests in and out of the diocese, all the current priests have been rotated out and their replacements have not yet arrived. Could that have been simply a coincidence?

On the final morning we completed the Basic Training in Barbalha by teaching the disciples about Eternal Rewards and Holiness. We are adding this relatively new material whenever we can since being “holy in all we do” (1 Peter 1:15) is no less important than doing the miraculous works that Jesus did for the sake of the gospel (John 14:12). Moreover, the eternal rewards believers will receive (or fail to receive) at the judgement seat of Christ (2 Cor 5:10; 1 Cor 3:12-15) encourage us to obey God and serve Him as diligently and as productively and conscientiously as possible during our time here on earth.

On the third afternoon when the disciples went door to door to heal the sick and preach the gospel, they witnessed more and more unusually powerful miracles. One young man named Miguel approached me during the mid-morning break and gave me the following startling testimony. At one home he met an elderly woman who had been blind in one eye for 30 years. The eye was mostly white with only a streak of color where the pupil was supposed to be and so completely useless for sight. Miguel touched the eye and ministered to her using authority as he had been taught.from Scripture. Astonishingly the Lord restored vision in that eye and the woman could see well through it afterwards. Miguel covered up her good eye and she could read with the other. But there was no change in the outward physical appearance of the eye. Click here for Miguel’s own riveting account of what he witnessed.

That’s just one of many miracles God did that afternoon through the disciples. It appears that the Light indeed shines brighter where the darkness is blacker. God began to show Himself very powerful in this stronghold of idolatry to bring the people back to Himself.

The disciples here are committing to continue what the Lord has begun through the Visitation of God here. They will continue to go door to door to heal the sick and preach the gospel until the Great Commission here is fulfilled and the Lord returns.