Reports from the United Kingdom

Brother Peter is a disciple in Northampton, England who trained with The Elijah Challenge via internet Training videos. Below is Peter’s report on what happened at an outdoor community “Umbrella Fair” where they invited infirm Fair-goers to come to be healed in Jesus’ name. 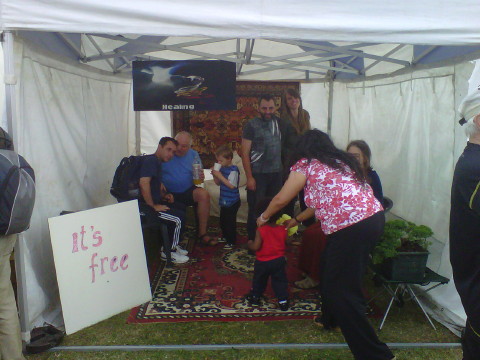 “First we set up the ‘tent’ (a covered gazebo-type affair with an open front), which was actually only 1 of the about 10 or more tents where some sort of healing was offered. There was a variety of Eastern healings to Reiki and also church groups offered prayers etc. Ours was clearly the smallest, least noticeable, simplest place in the whole fair – which turned out to be a good thing. It had no commercial taste to it, no sign of ‘professionalism’ – and we found that people trusted us more and felt more at home. (Below are Peter’s reports from the second afternoon of the two-day Fair.)

Ms. J. – already a believer, but backslidden. She was on the way to ask for some strong painkillers when we met her. She had arthritis in the hip and also inflammation as a left over from some removed lumps from her abdominal part. The symptoms of arthritis disappeared. She felt like the infection/inflammation had also disappeared. (And did not need painkilllers). We encouraged her to return to more active fellowship with Jesus and deal with her past in prayers.

A man in his 40’s – finger injury – could not move his finger and he had constant pain. Commanded 3 times – at last the pain was completely gone and he could move his finger. His family was there watching and were amazed. I shared the gospel with them and agreed that he will explore more of Jesus.

Mr. N. – chest pain (probably muscular, but possible related to being overweight) – First the pain eased up, for the second ministry it was totally gone.

Ms. D. – she had back pain – instantly healed. While ministering to her I had a word for her that the real cause is her right foot. She told me that she had an accident on that and it is true that since then her posture has changed and back pains began. We ministered against that too. Her friend Lisa standing there (who was first very skeptical) opened up by seeing the healing and also received something of Jesus. I prayed with both of them after and they went with my blessings saying that they will consider giving their lives completely to God. Let it be, Lord!

Young man A. – a young man came for healing for his injured back. Shoulder pains were gone instantly, the lower back after a few more minutes ministering. Him and his friend both received well the gospel, asked questions and wanted to know God more. I’ve got their contact details for follow up.

Ms. S. – a lady with damage to both eyes. Her vision is still very poor. After ministering her sight got more clear, but not as much as we would like it to be. We agreed to keep in touch and seek God together.

Her daughter H. also came for healing with a severe condition. She is 17, but the size of a 7-8 years old. Hannah’s spine is in constant discomfort and her right leg muscles did not develop and the leg did not grow properly. She can only walk slowly with a limp. Her right leg is in a plastic cast and completely de-sensitized. I ministered to her several times. The spine discomfort went more or less straight away (she also said that she felt a warmth running through her whole body, like energizing her wanting to run). The leg though did not get any better. We agreed with them to keep in touch. (They both responded well to the message about Jesus wanting to heal them physically as well as restoring them to eternal unity with the Father).

Ms. P. – this was probably the most powerful one today. This lady came in a wheelchair, she had a car accident in 2009 and more or less all the major bones and muscles in her body got injured. Shoulder, legs, neck, teeth and hips etc. After ministering I felt that this is just the beginning of a longer process, but I wanted to somehow test it. I asked her if she can walk at all. She said no, she hasn’t been on her feet for 2 years. So I told her to try to walk now. I offered my arm to lean on. (She is a quite big lady, so it was a brave offer). She slowly raised from the armchair, stood on her feet and slowly started to make steps. By the second step she was already exclaiming saying “This is a miracle! I haven’t stood on these feet for 2 years and now I can walk!”. Well, it was beautiful. By this time a crowd gathered there to watch. After about 3-4 steps she was exhausted and stepped back (!) to the wheelchair and sat down. She was very-very delighted and praised God (without anyone asking her to do it)…….watching her standing up a young girl bravely stepped to me and said “Wow, this is just sooo cool. Can I just stay here with you?”. So after I finished with Primrose and we exchanged details this girl told me that she is diagnosed with depression. I found out that her dad has been a victim of depression too. So we broke the curses and we together prayed for her healing and for finding God. She actually asked me to pray so she will know God. So we did. She is only 13, so I didn’t feel right asking for any contact details. But she won’t forget this day.

A believer named J. came for healing from arthritis in her hand – and the pain and symptoms were gone immediately.

A lady called S. – pain and tension in the back – immediate healing.

A young lady called S. came with her boyfriend. She asked for healing of her stomach as there was an unknown swelling in it with pain. As I ministered the pain was gone quickly, but I had a word that the cause is actually self-hate. (It wasn’t obvious as she appeared to be a confident and pretty young girl). As soon as I told her this and I mentioned the word “self hate” she collapsed and cried. Her boyfriend was there all the way through and that was great. She got healed and I prayed for both of them and we agreed to keep in touch.

A lady called J. – she had stomach ache – immediate healing – she responded to the gospel very well.

I think today we had around 90% success in terms of clear-cut, obvious healings. This is brilliant. People being miraculously healed and some finding faith. Glory to God for this all! The team members and others from the church also got encouraged and motivated by this – so there will be more to come.

I can’t explain how great it is to explore this simple and so obviously Biblical way of evangelism! Amazing… the sick are healed, the gospel of the Kingdom is preached. Truly the Messiah is glorified!”