The Elijah Challenge Training in the city of Juiz de Fora

Juiz de Fora, Minas Gerais, Brazil
August 2011
Reports: The Elijah Challenge in Brazil
Last year after we ministered at Shining Morningstar Baptist Church (Igreja Batista Resplandecente Estrela da Manhã) here in Juiz de Fora, the trained disciples applied what they had been taught from Scripture and witnessed powerful miracles for the gospel. The report on last year’s event can be viewed here.
The training event in August 2011 at this same Baptist Church was attended by more people. Pastors from other churches brought people to be trained. The Lord was gracious to enable us to train them effectively, and during the various sessions and at the climactic evangelistic healing service, He used his zealous Brazilian disciples to perform various miraculous healings to confirm the word of God. 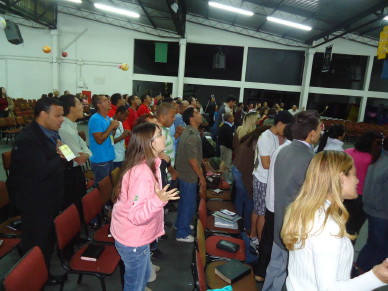 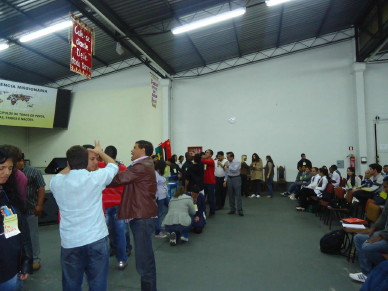 Above: Demonstration of healing as disciples lay hands on the infirm 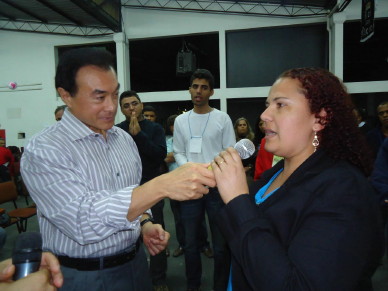 Above & below: people testify of being healed after hands are laid upon them 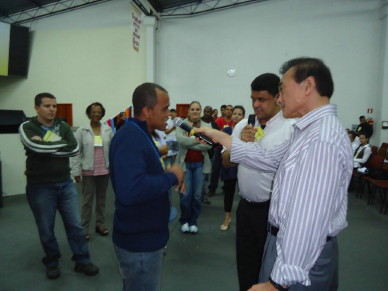 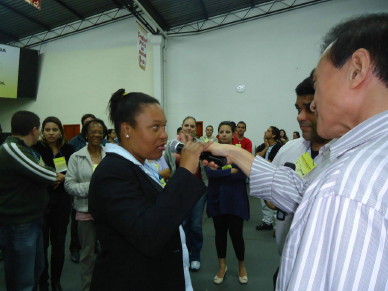 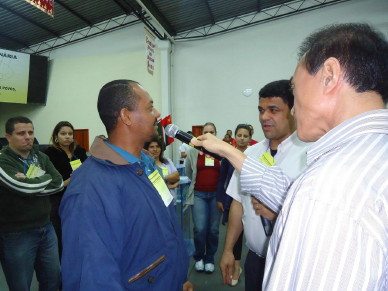 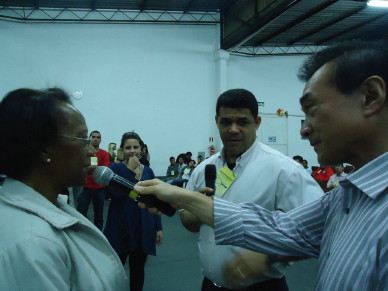 Our final meeting in Juiz de Fora which took place at the Outreach Evangelical Community Church (Resgatanda Vidas Comunidad Evangelica) Sunday evening was attended by about a thousand people. The church is but eight years old, but exploding under the leadership of its young pastor, Jose-Carlos. One could feel the presence of the Lord as one entered the building where the saints were worshiping the Lord in spirit and in truth.
Jose-Carlos had brought about 40 of his people to the Training held a week earlier in the Shining Morningstar Baptist Church. On Sunday evening at their own church they were ready to heal the sick to confirm the message of the gospel. After the preaching, they came forward to minister to the infirm as they had been taught according to the Scriptures. The Lord used them powerfully, and there were quite a few testimonies.
Two woman testified that they had come to the meeting feeling weak and miserable because of their heart conditions. After the disciples laid hands on them, their symptoms disappeared totally. A man was completely set free from very uncomfortable physical symptoms he experienced constantly in his face from having taken drugs in his past. There were other testimonies as well. Through the miracles the Lord had clearly demonstrated his authority to forgive sin and grant eternal life.
On the final morning of our stay in Juiz de Fora we met with Jose-Carlos in the lobby of my hotel, and he shared with me that the Training was a major breakthrough, even a paradigm shift, for his church. He will be sending 150 of his people door-to-door in Juiz de Fora to heal the sick and tell the people that the kingdom of God is near them (Luke 10:9). 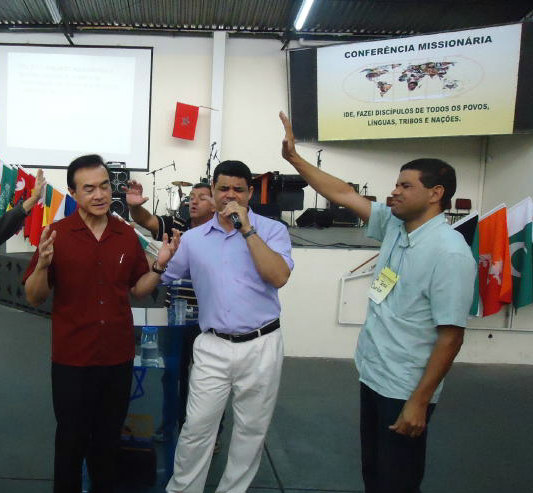 In the photo above, our host Djalma Barosso of Igreja Batista Resplandecente Estrela da Manhã (center) and Jose-Carlos of Resgatanda Vidas Comunidad Evangelica, both pastors in Juiz de Fora, are praying for us.
Pastor Djalma Barroso who translated for us is now teaching The Elijah Challenge effectively and leads trained teams out on mission trips to heal the sick and preach the gospel.