Fortaleza, Brazil
August 2011
Reports: The Elijah Challenge in Brazil
At the final meeting of our third mission trip to Brazil in 2011, we ministered at the main Sunday service of Rabboni Baptist Church which was celebrating its 18th anniversary. At the beginning of the week the Senior Pastor had brought some of his leaders to the Basic Training which we taught at another Baptist Church, and had told me that his people would be ready to minister healing at the meeting the following Sunday. I confess I was a bit skeptical in my heart that they were really ready for “actual battlefield conditions,” especially having taken the training days ago. Would they be rusty and out-of-shape, unable to face the real thing?
We decided to trust the Lord. To prepare God’s people for the Second Coming of Christ we preached to them as Elijah did at Mt. Carmel thousands of years ago. As did John the Baptist did to prepare the Israelites for the first coming of the Messiah, we preached true repentance as demonstrated by the bearing of good fruit—the fruit of a holy personal life and good works in obedience to God’s commands. Then we asked the God of Elijah to send the fire of healing to show that He was turning the hearts of the people back to Him.
After that we reminded the trained disciples of what they had been taught a long five days ago, and then asked the infirm to come to the front to be healed in Christ’s name. For me it was a bit like stepping out of the boat. Many people with infirmities surged forward. And the Lord was gracious and faithful; He used the trained Baptist believers with what to me was surprising effectiveness. Many were healed and came up to the stage to testify. One of the very first to testify was a man in his sixties who proclaimed with gusto that he had been healed of his heart condition. I did not expect the Lord to use these Baptist believers in such a way.
After all the testimonies the people responded by repenting and turning back to the Lord to serve Him in holiness and obedience. 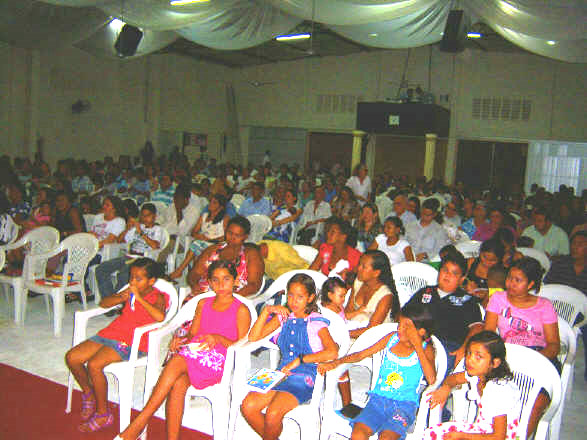