The spirit of Elijah in the Democratic Republic of Congo

The town of Goma is right on the eastern border of Congo near where it intersects with Rwanda and Uganda. It’s situated at the northern tip of beautiful Lake Kivu. Near the right edge of the map below you can see Goma within the circle. 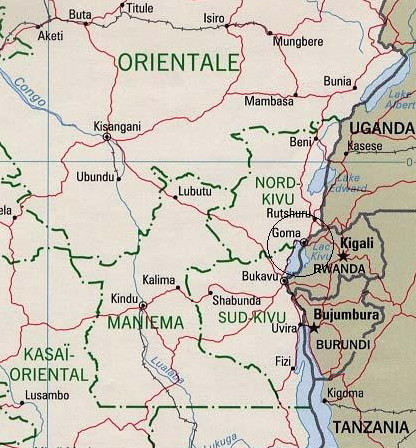 In January 2002, nearby Mount Nyiragongo erupted and spewed forth lava which nearly obliterated the town. The lava has since then hardened into rocks which still cover large swaths of Goma. Below is the lava field seen from the back door of the church where we held the last session of the equipping. 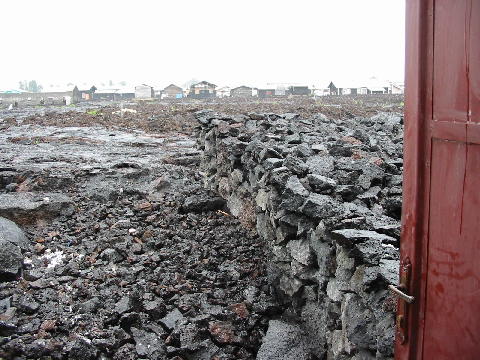 The “backyard” of the Church of God in Goma

We first equipped some of the area’s full-time servants of God how to heal the sick and cast out demons to prove to the lost that Jesus Christ is the only way to the Father. At the final equipping session held in the Church of God shown below there were 256 of God’s servants in attendance.

After the training we had them apply what they had learned. We held an evangelistic healing meeting outdoors just in front of the Church of God where it faces the road. A makeshift platform was erected outside the front doors, facing rows of benches and chairs. 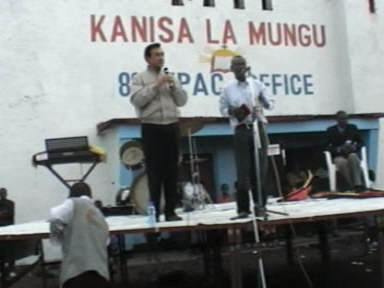 All that day I had been fighting a cough. When I arrived at the venue shortly before 4 PM, it was raining. I was shown to a seat next to the platform, completely exposed to the rain. I mounted the platform after being called up to speak and immediately informed the people that the One True God had sent us to proclaim His Kingdom. I announced that we would ask Him to heal the sick to prove that His Kingdom was near (Luke 10:9). When I asked who wanted to be healed, many people, both seated and standing in and around the area, raised their hands. Around that time, the rain completely stopped. 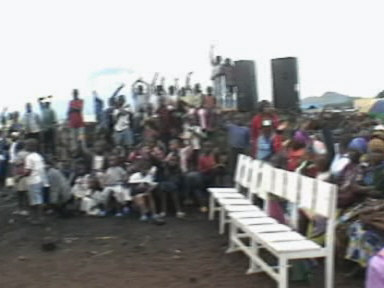 I then invited the trained servants of God to form one long line in front of the platform. They would heal the infirm in Jesus’ name. 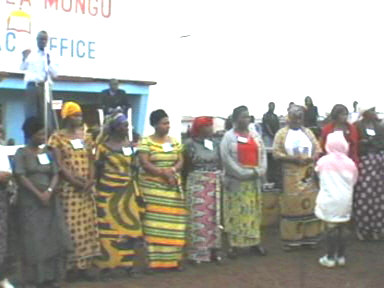 After prayer to the God of Heaven in the name of Jesus Christ, those with infirmities streamed to the front to be healed. Below is a boy who came on crutches. 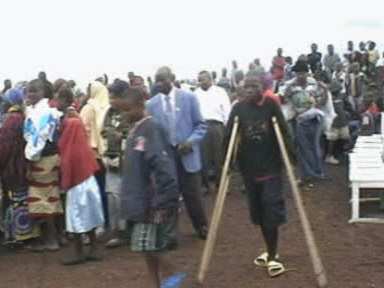 The trained servants of God laid hands on the sick and exercised their authority over disease and demons in Jesus’ name. 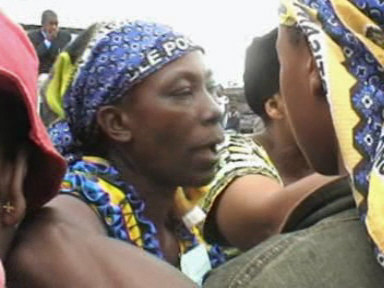 After a few minutes, the young man below was the first to come up to the platform to testify that Jesus had healed him. 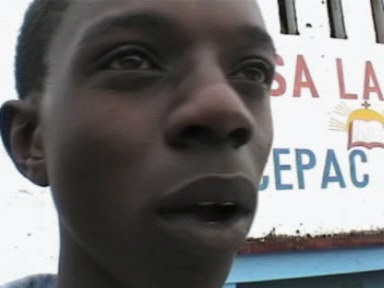 Many more climbed up the stage to testify that they had been healed. So many came up that I was seriously concerned that the temporary platform might collapse under their weight. 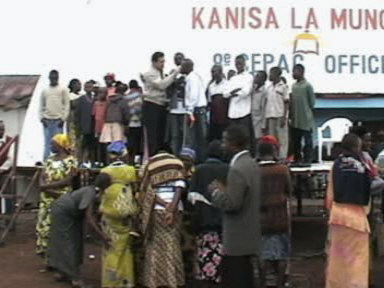 Below, the boy who came on crutches was able to walk on his own unaided. 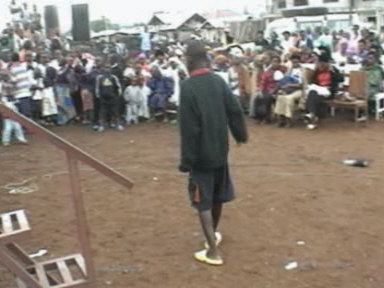 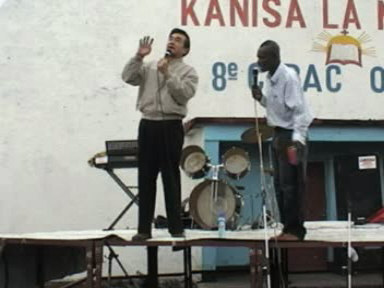 When I invited people to leave the kingdom of darkness and to enter the Kingdom of light by believing in Jesus Christ, an estimated 150 to 200 people streamed forward. 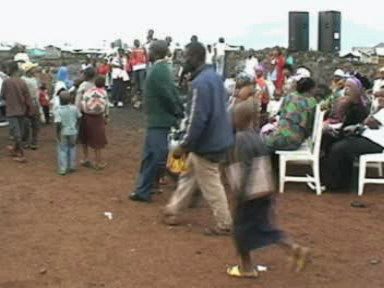 Souls gathered before the platform to receive eternal life by making Jesus Christ their Lord and Savior. 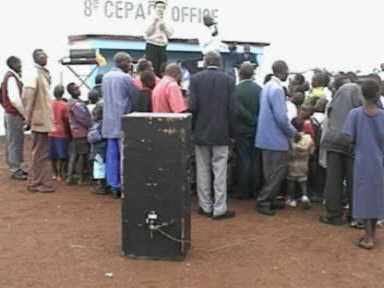 They prayed and asked the Lord to forgive their sins through the blood of Jesus Christ shed on the cross. 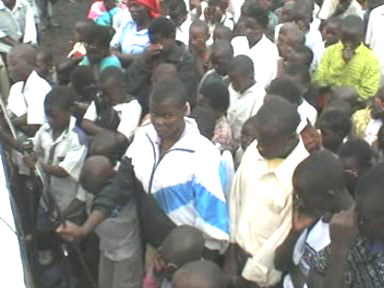 What is the significance of this event?

Most exciting of all is that the local servants of God have been equipped to hold similar meetings on their own in the future. The Lord had used them to perform all the miraculous healings; I only preached from the platform. Moreover, the rally had hardly cost anything. I didn’t have to bring any funds to help. This means the local servants of God are no longer dependent on outsiders—either on the ministry of a foreign evangelist or on outside funds. They can get the job done on their own. I believe this is God’s perfect will in order for the Church around the world to fulfill the Great Commission. We do not come to bring them fish; we teach them how to fish.

I am told the host of our meetings, World Vision of Goma, will be following up on what the Lord just began. They will encourage the servants of God to use the talents that have been entrusted to them. 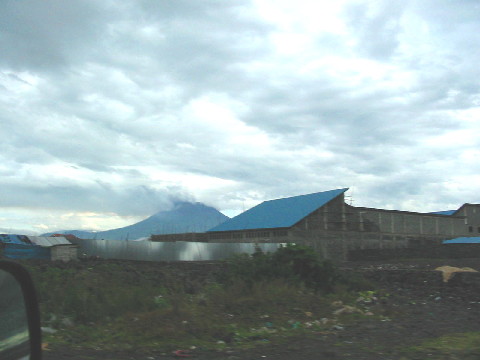 Mount Nyiragongo appears to smolder in the distance

“Greetings from the Democratic Republic of Congo.

I just need to inform you that, from Friday November 23rd to Tuesday, November 27th, in Sake (25 km from Goma) there was fighting between rebel soldiers and government soldiers. This happened and stopped all activities in Goma. We were able to go back to work this morning.

• What kind of comments did you receive from the pastors who participated? According to the participants this was a big meeting and many of them need to replicate in their area of operation; also, their wish to see in what way we can organize the same meeting in the future and call you again, because they regret one thing: lack of preparation in advance for your arrival. Pastors now want to talk in different churches about healing, also their observation that the people in Goma after receiving their healing immediately go home and don’t come back on other days but rather send friends or other relatives. For that reason, they will share in the churches why we must testify for God in public (after miracles take place).

• How was the Seminar & Crusade different from past meetings in Goma? As you know this was a healing meeting. People received healing from God and also, the meeting help to open the eyes of many servants of God—their understanding that all of them have such power but they didn’t use it. Then this was a very big Seminar. Regarding this meeting, the servants of God appreciated your methodology of presenting the word of God, the practice of healing the sick immediately after or before the preaching, and the system of having participants to practice what they learned immediately after being taught; the importance of the testimonies (that is, people coming in front of everyone and testifying about God’s healing hand). Also, the syllabus and CD that you left for church leaders (I continue to make copies for them and will call them by the end of next week for them to collect the syllabus; I will also send you pictures and a full report from the servants of God). Also, I confirm that this was a big meeting despite of lack of preparation in advance.

• What did the Lord accomplish through the meetings that week? Many healings and miracles. I have received from one pastor a testimony that the Sunday after your departure, one woman received healing when watching TV in her home. “She said, ‘when pastor asked people to touch the sick place, so in my lounge at home I decided to touch and followed the healing prayer. Just immediately I received healing, and decided to come to testify.'” We have also to thank God for many miracles, especially remembering the last day when we decided to meet in front of the big church (for the open-air meeting), it was raining all day and we were all exposed to the rain, but miraculously the rain stopped completely when the preaching begin.

• What kind of impact do you think there will be on the Great Commission in Goma? Let me think about the exercise of healing and miracles in many churches in Goma. Also, if really all participants in the Seminar put in practice what they have learned, we will see in Goma a big impact in terms of the reduction of the “small prayer groups” [in French, the cultic groups known as “chambres de prière”]—because people need to see miracles—and also, this must change the minds of many servants of God. Many blessings.”

Report from Emmanuel Luvuga who attended the training:

Your teaching has helped us greatly and if we are effective in the ministry today it’s because of you. The exploits that we are doing will arrive to you when the Lord provides a camera for us.

The first event was with a group of students in which some received Jesus as Lord and others experienced instant healing from headache and stomach ache on Saturday, June 2, 2007.

The second event took place….on Sunday, June 3, 2007. Some people received Jesus as Lord and others were healed of internal injuries and pain in the belly.