On this our initial and introductory trip to Kenya, a small group of servants of God brought together by Bishop Mickey Okeyo of Solid Rock Community Church was equipped with The Elijah Challenge Basic Training. The venue for the equipping was at the East Africa Regional Headquarters of the Redeemed Christian Church of God in Nairobi.

After the training we held Evangelistic Healing Rallies in the slum known as Kibera—the largest slum on the African continent—where most of the approximately one million people live on less than one US dollar a day.

The “commercial district” of Kibera 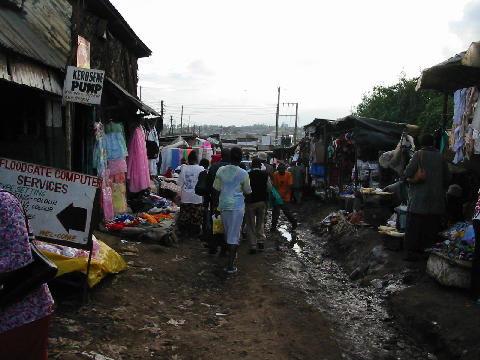 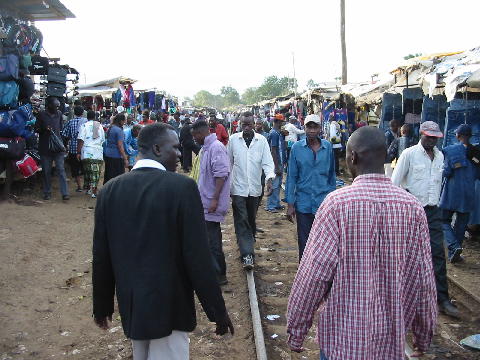 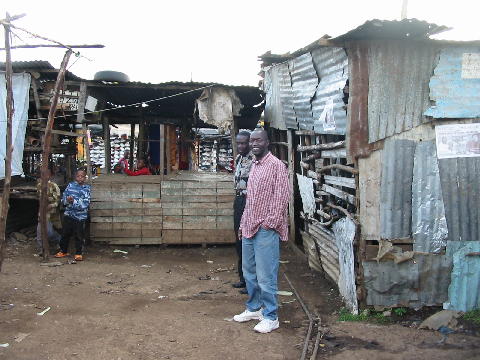 For the first evangelistic rally at Laini Saba we brought our sound system and speakers but no platform was available. Pastor Steve Baraza, who has planted a church in the slums, led the worship with great exuberance. A scattered crowd was present.

I took the microphone and announced that we would ask the God of Heaven to heal the sick to demonstrate that His Kingdom was near. About fifteen people with infirmities, adults and children, stepped forward. After prayer, the trained servants of God laid hands on them and exercised their authority over disease and demons in Christ’s name.

It appeared that all of them were healed and came forward to testify publicly. Among them, three children testified that impaired hearing in one ear had been restored. God gives much grace to the humble and the poor, and His miracles for them are powerful.

I then told the people that the miracles demonstrated that the Kingdom of God was near (Luke 10:9) to them. But in order for the Kingdom of God to come to them so that they could enter, there was only one way—Jesus Christ who died on the cross for bear our sins. About twenty people responded when I asked people to come forward to follow Jesus Christ. All of this took a bit over a half an hour.

At the second rally the next day I challenged the people. I asked them: which is the true way of salvation—witchcraft and traditional beliefs, or Jesus Christ? The one that could heal the seven infirm people would be the true way of salvation. I invited any practitioner of witchcraft to come forward to heal the people using magic. No one took up the challenge. So we prayed to our God in the name of Jesus Christ, asking Him to heal the people of their infirmities. After that the trained servants of God laid hands on them; all seven publicly testified that had been healed. Two of them jumped up and down vigorously to demonstrate that their legs/feet had been healed. The seventh person was a drunk who just happened to be passing by. He had not been able to eat a certain kind of food for three years because of pain in his jaw. He was completely set free from the pain.

Then I proclaimed the gospel of Jesus Christ. About ten children appeared in front of me when I invited the people to believe in Jesus. Adults in Kenya can be shy about coming forward publicly, and I was told that some of them also gave their hearts to Jesus Christ, including the drunk. He said he would go to church the following Sunday.

These rallies are being continued by the local believers on their own. They have been equipped how to heal the sick in Jesus’ name to prove that Jesus Christ is the only way of salvation. They are not dependent on outsiders.

Among the other newly-equipped servants of God, Pastor Steve Baraza is using the weapon of miraculous healing as he preaches regularly out in the slums of Kibera. His congregation is being trained to heal the sick as well, and he is now leading a powerful team of believers to snatch precious souls from the darkness of the Kibera slums. 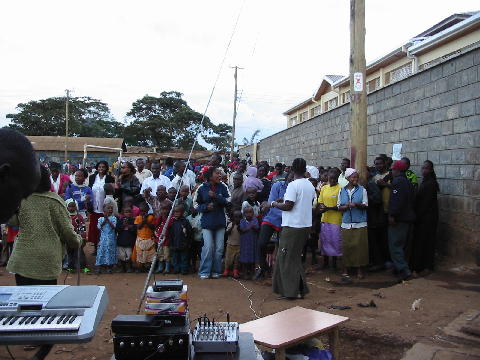 Pastor Steve Baraza’s favorite corner for open-air preaching in the slums; in the foreground is our Coordinator Bishop Mickey Okeyo