He couldn’t walk or move for months but was miraculously healed in the name of Christ; then baptized! 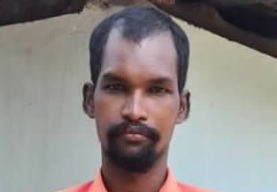 “It all started with a small boil in Rabi Munda’s back (above & below). He had gone to the hospital where he was given medication. But after a few days his legs were strangely affected and he wasn’t able to walk normally. Again and again he consulted with his doctors, but all their test results came back negative.

Eventually he was confined to bed. For four to five months he was bedridden, unable to walk or even move. Finally contact was made with our Elijah Challenge workers. They came and ministered to Rabi in the wonderful name of Jesus. The Lord graciously touched him and Rabi was able to get up and walked slowly. After three days he was walking normally. Along with his wife, Rabi was baptized in water as a follower of Jesus Christ.”
. “Sasikar Dandsena (below), a young man, had been working in the state of Goa as a laborer. But for some unknown reason, his legs were getting thinner day by day while his knees were swelling up. Unable to work anymore Sasikar left Goa and returned to Orissa. Back home he underwent several scans and accompanying treatment, but his legs simply became weaker and weaker. Finally Sasikar couldn’t even walk anymore.

Our workers heard about him and went to his home to minister to him. The Lord touched him, and after a week Sasikar was walking again. He and his wife gratefully accepted Jesus as their only Lord and Savior, and were baptized. A house church was planted.

Then Sasikar began to face persecution from his family, who asked them to leave. But he and his wife remained strong in their faith. They are now staying with one of his relatives in a nearby village.”
.