Woman gets up and walks after suffering a stroke, entire family accepts Jesus 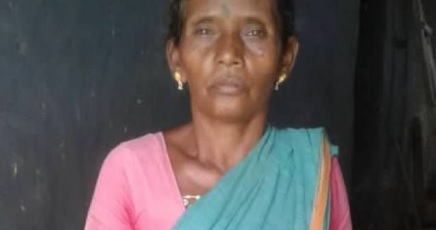 “Thank you so much for your intercessory and financial support for the extension of the Lord’s kingdom in unreached regions here in India. We thank God for his grace and mercy, using us despite the current COVID-19 pandemic. Praise the Lord!”
.

“Ritamani (above and below) lives in the village of Tiliakani. Fifteen days earlier she had had a stroke, and her right leg was paralyzed. Her husband had taken her to the hospital for treatment, but she didn’t recover. The doctor advised them to go to the more advanced hospital in the city. Apart from that, he said, she wouldn’t be able to get well. But since they wouldn’t be able to afford the more expensive treatment, they went back to their village. There our Elijah Challenge workers ministered to her in the name of Jesus. Ritamani got up and began walking normally. Her entire family accepted Jesus Christ.”
. “Little Khusbu (below) fell into a pit and broke her leg. Her father had taken her to the hospital where scans were taken. The doctor then advised the family that Khusbu would not be able to walk for three or four years. But after our workers ministered to her over a period of three days, she was completely healed and able to walk again. The family accepted Jesus.”
. “For three years young Khageswar Majhi (below) who lived in the village of Harekrishnapur suffered from a heart condition. His condition had become serious the last few months, and finally he refused to eat. Regular prescription medicine didn’t yield any improvement. Then our Elijah Challenge workers arrived in Harekrishnapur and ministered to him in Jesus’ name. Khageswar was miraculously healed from his heart condition. He and his family accepted Jesus Christ.”
. “Young Sandhya (below) had a serious case of malaria. Medication cured her of the malaria, but afterwards she couldn’t walk normally. Her parents then spent a lot of money taking her for more advanced treatment, but Sandhya still didn’t get well. They were very upset. But when our workers ministered to her in Jesus’ name, she was healed and able to walk normally again. She accepted Jesus along with her parents.”
. “For two years a woman named Phula Munda (below) suffered from arthritis. She had been treated with ayurvedic medicine as well as allopathic medicine. During that time she persisted in working despite the painful arthritis. Then our Elijah Challenge workers ministered healing to her in Jesus’ name, and Phula was miraculously healed. Her entire family believed in the Lord and accepted Christ.”
.