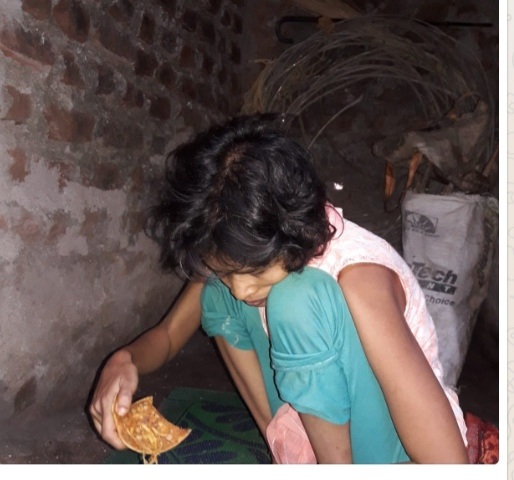 “I would like to share about a wonderful deliverance. For over twelve years young Nalini had been deranged (above). In 10th grade she had been first in her class. But after that no one could imagine what would befall her. She just stopped walking, talking and eating. Most of the time she would be in bed.

Her high caste Hindu parents spent over five lakhs (500,000 rupees) on medical treatment for Nalini. They took her to well-known doctors, sorcerers and others, but no one was able to help her. They were devastated at what had happened to their dear daughter who had once shown such great promise.

Being high caste Hindus they did not want Nalini to see our Elijah Challenge workers. But recently one of our believers saw her condition and shared with her father about our ministry. They said they had already tried everything to no avail, but our believer encouraged them to believe in Jesus and to witness a miracle.

And so her parents contacted me and allowed me two opportunities to minister to Nalini over the phone. They began to see marvelous changes in her. Saliva would constantly drip from her mouth, but it stopped immediately. She started responding to her family normally, and began to eat again. They live fifty kilometers from Bhawanipatna. This will be a great testimony for our Lord Jesus in that area. Glory to God!

A few days later Nalini’s brother dropped by our home. With much excitement he informed us that the family is now believing in Jesus and continuing to walk with Him. I took the opportunity to share the gospel with him more deeply. Praise the Lord!”

Received from Elijah Challenge Co-Worker in India
May 7, 2020
. Above: Nalini after receiving ministry in the name of the Lord Jesus Christ Nalini in 10th grade before her illness