The Elijah Challenge was invited to equip pastors, servants of God, and Seminary students gathered at Gereja Kristen Baithani’s auditorium. After two morning sessions of training an Evangelistic Healing Service for the lost and the infirm was held. 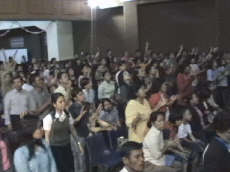 After the evangelistic message the trained believers laid hands on the infirm, and many testified that they had been healed in Jesus’ name. A young man who had not been able to lift his arms over his head since birth was seen raising his arms effortlessly. 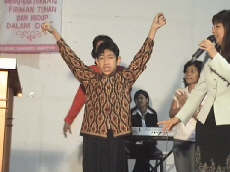 One lame man severely crippled from birth was able to walk, although not perfectly, without the aid of his crutches. He had never done this before. See the photos below. 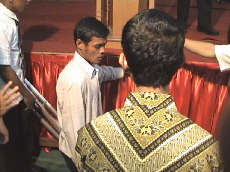 Above: leaving his crutches behind him,
he gets up and walks in Jesus’ name 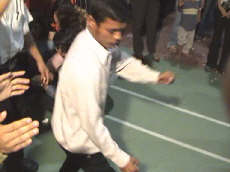 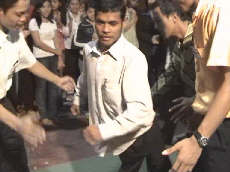 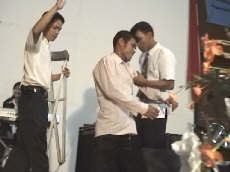 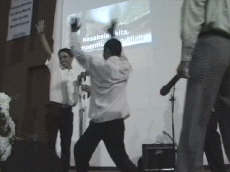 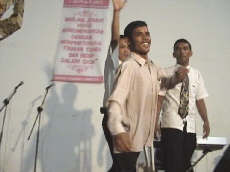 “The lame walk, and the gospel is preached to the poor”

Two people with heart conditions testified that they felt normal. One was a young lady with a congenital heart condition since birth. Normally she would feel tired after walking around and her palms would perspire especially in the middle of a crowd. But there was no exhaustion or sweating. People accepted Christ seeing the miracles. It was very exciting for these “ordinary” saints to see how the Lord had used them. There was no celebrated or specially anointed evangelist present. Never before had they witnessed such things in their midst. 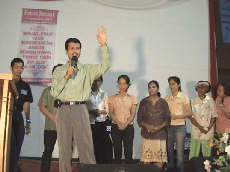 These are the days of Elijah.