Man set free from seizures like the boy in Matthew 17 whom the disciples failed to heal…explanation? 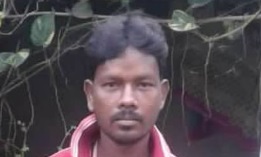 “We are thanking God for His great mercy and grace upon us during this current pandemic. Over the past ten to fifteen days the COVID-19 has been spreading very rapidly here in India with a very high death rate. But the Lord has kept us and our workers all safe and sound. The ministry is going well with new believers in many places ready to be baptized despite it being illegal in our state.”

“For a long time young Kishore (above & below) living in the village of Bausapada had been terrorized by seizures. From time to time he would fall to the floor with his body convulsing. In the same way he would be thrown into water and other places. A spirit, like the spirit of epilepsy on the boy in Matthew 17, had bound Kishore.

He couldn’t leave home anymore because the seizures could come upon him at any inopportune time. Saliva would ooze and come dripping out of his mouth. The prescription medication he had been taking for a long time did not help. When our Elijah Challenge workers came and ministered to Kishore in the name of Jesus Christ, the seizures stopped. He and his family accepted Jesus as their only Lord and Savior.”

Why is it that our workers could cast out such powerful demons while the early disciples failed to do so? For the answer, click on the down arrow below on the right.

WHY DID THE DISCIPLES FAIL TO HEAL THE BOY IN MATTHEW 17?

In Matthew 17:19 the disciples asked Jesus, “why couldn’t we drive it out?” For the answer, we typically turn to verse 21 where Jesus states that “this kind comes out only by prayer and fasting”—meaning that this kind of very powerful demon can be cast out only by God himself intervening after we pray and fast unto Him. We disciples are unable to cast it out. However, this interpretation of verse 21 is totally inconsistent with the context of the incident—which reveals that Jesus totally expected the disciples to cast out the demon. So when he heard that they had failed, he rebukes them severely and calls them an “unbelieving and perverse generation”. The actual reason for their failure was their “little faith”, that is, little mountain-moving faith (verse 20). Our workers in India are taught to exercise this mountain-moving faith by which they can in fact heal the sick and cast out powerful demons. “For four long years Sukhamani Tirkey (below), living in the village of Nabraongpur, had a problem with her breathing. With COVID-19 causing death in infected people with comorbidities like difficulty breathing, it was a serious issue for Sukhamani. Just walking a few steps, not to mention working, would leave her out of breath. But when our Elijah Challenge workers ministered to her, she was miraculously healed. Her family accepted Jesus.”
. “After a few months suffering from pain in her eyes, Salomi Tigga (below) lost her eyesight totally. The hospital gave her medicine, but her condition persisted. Day to day life become a misery for poor Salomi. When our Elijah Challenge workers came to her home to minister to her, she was healed with her eyesight completely restored. Her family accepted Jesus Christ.”
. “Young Anita (below) residing in the village of Sarlaangi would be attacked by demons from time to time. For months she behaved like a mentally-ill person. Her parents were dumbfounded as to where they could find treatment for her. Recently our Elijah Challenge workers arrived in their region and stopped by to minister to her. She was powerfully set free in the name of our Lord Jesus. Anita’s parents accepted Him and are now attending one of our house churches.”
. “For seven years, Sathidebagan (below) had been barren and unable to conceive even after receiving medical treatment. Sorcerers and temple priests were also unsuccessful despite the considerable amount of money her parents had to shell out for the various treatments over the seven years. After our Elijah Challenge workers ministered to her in Jesus’ wonderful name, she became pregnant. Our gracious Lord blessed her with a precious baby girl.”