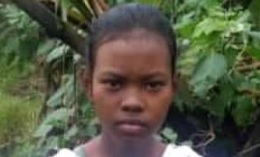 Reports from our trained harvest workers in India

“A young girl named Nirupa Majhi (above & below) living in a village known as Sandraposh had a skin disease for a long time. Her family had taken her everywhere but were told that there was no known treatment for their little girl. Indeed, nothing was able to alleviate Nirupa’s suffering. When our workers arrived in the village and came to know about Nirupa, they informed her parents that they would minister to her and that she would be healed in the name of Jesus. As they laid hands on her, the Lord touched her and Nirupa’s skin condition miraculously disappeared. Her father and mother believed and accepted the Lord Jesus Christ.”
. “In the village of Pradhanpada a young lady named Rinki (below) suffered from demonic attacks. She would lose consciousness for hours at a time before waking up. Doctors confirmed that her problem wasn’t physical. Her parents paid a sorcerer handsomely to help Rinki, but he couldn’t do anything for her. They took her here and there for treatment, but nothing helped. But when our Elijah Challenge workers came to minister to her in the name of the Lord, Rinki was completely set free. She and her parents accepted Jesus Christ.’
. “For a long time, young Rushi (below) had seizures making him totally dependent on medication. Despite the medication, on some days, especially during the full moon, he would collapse onto the ground convulsing. Our Elijah Challenge workers stopped by his home and ministered to him in Jesus’ powerful name. Rushi was miraculously healed and delivered. He and his wife accepted the Lord Jesus.”
. “For two long years young Arun (below) had severe back pain. Due to the pain he couldn’t even ride his motorbike. After work the pain in his back was particularly unbearable despite the medication he took regularly. After all else failed, his doctor advised an operation for his back. But after our Elijah Challenge workers ministered to him, the pain disappeared. Arun and his wife accepted Jesus.”
. “Bablu (below) had jaundice which made him very weak. His parents were beyond concerned and at their wits’ end. Allopathic medicine had failed to help. To make the problem even worse, Bablu was also addicted to alcohol. His parents didn’t know what to do for him. Finally, our Elijah Challenge workers came and ministered to him. They counseled him to stop drinking. The Lord touched him, and Bablu was miraculously healed from the jaundice. He accepted Jesus Christ.”
.