Hare Krishna delivered from 20 years of demon-possession; now wants to live for Jesus 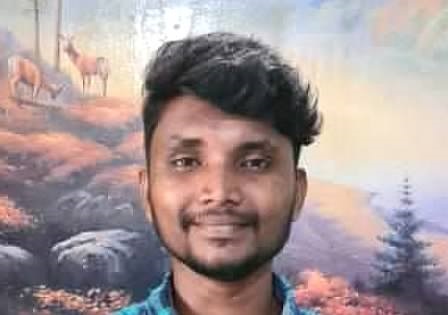 “Thank you so much for your great plan and vision for India. Over one billion people here do not know the Lord. We will continue to attempt great things and will expect great things from the Lord. Below are some outstanding reports for you.”
.

“Young Hare Krishna (above and below) had been demon-possessed for twenty long years. For the last week the demon had been acting up and tormenting him. He could not sleep a wink. He would run away from home and do all kinds of unbecoming things. His family brought Hare to us on a Friday.

As soon as he entered our home he began shouting and falling on the floor here and there. Through his voice the demon screeched at us, ‘I have stayed in this body for 20 years, so where can I go now? I will not leave. I will kill him.’ For a few minutes the demon beseeched me. With much boldness and authority in the name of Jesus Christ I commanded it to leave. Strangely, it began looking for a hole in the wall to leave. After a minute the young man fell to the ground, and the demon left.

Hare Krisha and his parents accepted Jesus Christ. Hare took the step of wanting to live for Jesus. Our Elijah Challenge workers will visit his village for a prayer fellowship and to plant a house church.”
. “For 2 to 3 years a young boy named Tusar (below) suffered from sickle cell anemia. From time to time he would need blood and had to be admitted to the hospital. His father had passed away two years earlier, and his mother worked as a health care worker. Both were from a fanatic Hindu background. We ministered to Tusar in Jesus’ name and the Lord touched him. Within a week his appearance changed and he was well. Our workers are now going to their home for prayer meetings. They live right in front of a big Hindu temple.”
. “Young Rajani (below), living in the village of Pharang, would be tormented by demons especially during a full moon. During the attacks she would lose consciousness for hours. Her father took her to a sorcerer, but he couldn’t deliver Rajani from the demons. When our Elijah Challenge workers ministered to her she was completely delivered. The family believed and accepted Jesus Christ.”
. “For three months Kulrili (below) had back pain. Even after much medication the pain would not subside. When our workers ministered to her in Jesus’ name, at that very moment she could feel healing taking place in her body. She began to perspire and the pain vanished. Both Kulrili and her husband accepted Jesus Christ as their only Lord and Savior.”
.