During this weekend in Houston at Encourager Church, committed followers of Jesus Christ were trained to do the works that He promised his disciples would do.

These servants of God were taught how to use the Scripture-based approaches of 1) contextualization and 2) healing the sick to draw Musl__ms, Hindus, and Buddhists to Jesus Christ as Lord and Savior. Isl—m now has hopes and plans of taking over the United States.

The Lord is slowly waking up His people to the need of being trained for battle. Most believers are still content with just receiving the Lord’s blessing and are not eager to be trained to fight as soldiers of the kingdom—healing the sick and proclaiming the kingdom of God to the lost. This is not surprising in view of human nature which naturally seeks comfort instead of risky challenges. In the body of Christ today, there is much emphasis on the priestly office for ministering to the Lord and on the prophetic office for ministering to the Church, but little attention to the kingly office for war against the enemies of the kingdom of God. But we believe the Lord is beginning to restore balance to His Church.

We must pray today just as Jesus taught His disciples to pray two thousand years ago:

Matthew 9:37 Then he said to his disciples, “The harvest is plentiful but the workers are few. 38 Ask the Lord of the harvest, therefore, to send out workers into his harvest field.”

About twenty-five committed disciples of Christ gathered to be trained on this October weekend. They were trained to heal the sick and cast out demons just as Jesus taught His disciples and then commanded them as He sent them out to proclaim the kingdom of God. All of the Training was taken faithfully from Scripture.

Luke 9:1 When Jesus had called the Twelve together, he gave them power and authority to drive out all demons and to cure diseases, 2 and he sent them out to preach the kingdom of God and to heal the sick.

During the demonstration sessions, the Lord graciously confirmed the teaching by healing some believers of their physical infirmities. Others reported significant improvement in their physical condition. One sister had a large lump on her back which could not be found after believers laid hands on her and rebuked it in Jesus’ name. An elderly sister named Mary who came to the meeting with a cane was able to walk without the cane afterwards. Days later she was still walking without it. Earlier in May 2008, Mary had attended The Elijah Challenge Basic Training held at Houston’s Union Baptist Association. At that time according to her doctor one of her eyes was sightless. But when believers laid hands on that eye, her sight was restored and she could see clearly. See Mary in the photo below. 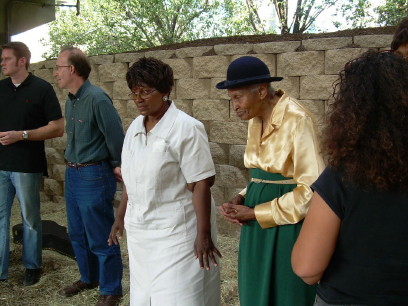 Outreach at Church Under the Bridge 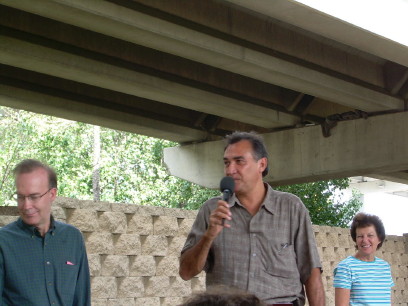 On Sunday afternoon we gathered in the open-air at a downtown Houston venue known as “Church Under the Bridge” for the homeless. We carried out Jesus’ commands in Luke 10:9, “heal the sick, and tell them ‘the kingdom of God is near.'” 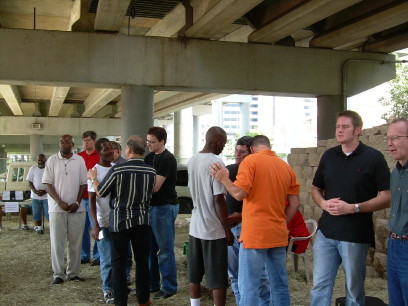 Ministering to the infirm & addicted in Jesus’ name

We invited the infirm and addicted to come forward for healing and deliverance through the laying on of hands and ministry of the trained servants of God. Immediately afterwards some of them testified that they had been set free or healed by the Lord. In addition to other testimonies, two young women who were addicted to cocaine testified that they had been miraculously set free and felt no more urge for the drug. 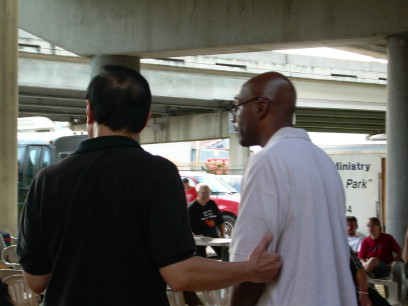 Man at right testifies he is healed

After the testimonies, we declared to the people that “the kingdom of God is near” as evidenced by the miracles they had just witnessed. We challenged them to be rescued from the dominion of darkness and to be transferred to the kingdom of light by repenting, turning away from their sins, and putting their faith in Jesus Christ as Lord and Savior.

Acts 2:38 Peter replied, “Repent and be baptized, every one of you, in the name of Jesus Christ for the forgiveness of your sins. And you will receive the gift of the Holy Spirit.

Precious souls responded and repented, becoming disciples of Jesus Christ. God had graciously enabled His servants to carry out the command to “heal the sick, and tell them ‘the kingdom of God is near.”

Their Training is done for the time being. May the trained servants of God now launch out to proclaim the kingdom of God on their own in the same way. 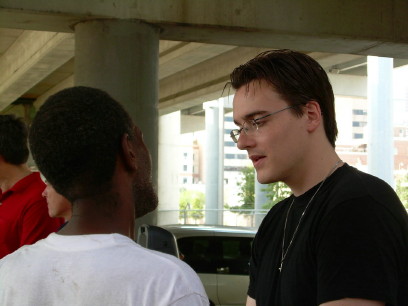